15 ETUC priorities for the new mandate of the EU institutions 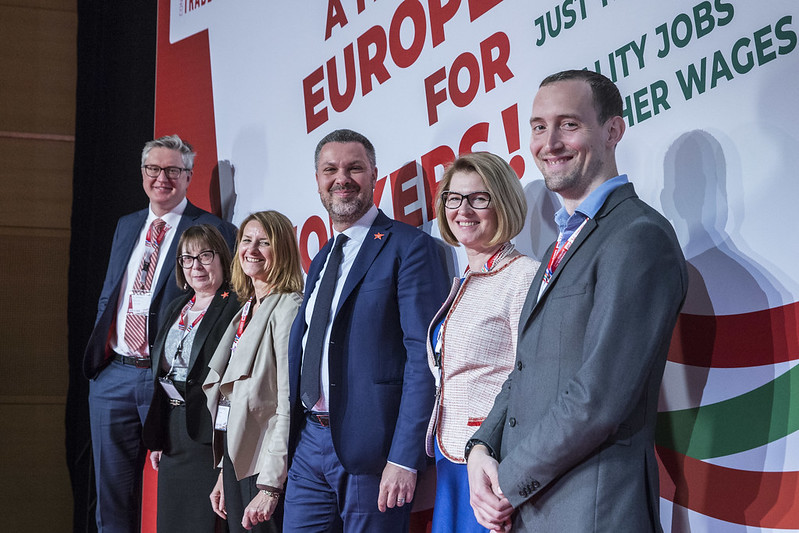 The European Trade Union Confederation represents 45 million workers from 90 national trade unions in 38 European countries and 10 European sectoral trade union federations. It presents the following priorities for the new mandate of the EU institutions, particularly the new Commission’s Work Programme and strategic agenda for the next five years.

They are aimed at the European and national institutions, social partners and stakeholders; so as to build cooperation on a fairer future for Europe, based on democracy and social justice, just transitions, quality jobs, better working conditions and higher wages.

Ensure the full participation of social partners in the announced Conference on the Future of Europe and in any other related consultations and proposals regarding the Future of Europe, the Rule of Law and possible constitutional reforms and Treaty changes, including a stronger role for the European Parliament and the extension of the Qualified Majority Vote, in full respect of social partners autonomous negotiations and agreements.

All these initiatives should aim to achieve a renewed European Social Contract, a Social Progress Protocol, and stronger social dialogue and democracy at work at all levels; while ensuring that all EU policies respect social and environmental sustainability.

Launch an extraordinary plan for public and private investment for quality job creation, by implementing a fiscal capacity to allow public investment and investment in public services.

Consider the introduction of a European unemployment reinsurance scheme, to tackle macroeconomic shocks on labour markets.

Fight tax avoidance and tax evasion, including through alliances with civil society organisations.

Achieve wage increases and upward wage convergence in Europe, to address the wage gaps between and within countries (particularly between East and West), improve the wage share in the economy, reduce inequalities, and enhance internal demand and productivity – including through:

In this context, strengthen national sectoral collective bargaining as a fundamental right and an essential tool for equality and prosperity for all, including through a European legal instrument to:

Improve support for the relaunch of European cross-sectoral, sectoral and national social dialogue, including:

Ensure that social partners agreements can become legally binding, based on the provisions of the Treaty and through a binding process for implementation to be discussed with the European Commission.

Reform the EU legal framework on worker’s participation and European Works Councils (EWC) towards more inclusive and robust approach to workers’ rights for information, consultation and participation. Actions should include: a legal framework on information; consultation and participation; legally binding minimum standards on workers’ board-level representation; gender equality and diversity in company boardrooms; and a review of the EWC directive.

A European directive on due diligence, focusing on human rights and responsible business conduct, should include workers’ and trade union rights, reflecting the core values of the EU Treaties and the Charter of Fundamental Rights of the EU. The directive should provide legally binding measures for multinational companies including supply chains.  It should also strengthen a preventive approach to liability and remedies for human rights violation and environmental damage.

Establish an Action Plan for the implementation of the EPSR; through full involvement of social partners and a range of tools - including legislation, policy measures, targets and standards, the European Semester, the social scoreboard and the Multiannual Financial Framework.

The Action Plan should implement all principles and relevant recitals contained in the Pillar. This should be done on the basis of an in-depth analysis of what has already been achieved in terms of European and national legislation and action; and address among others specific initiatives in the fields of workers’ and trade union rights, education and training, youth non-discrimination and gender equality, public services, social protection and pension systems, minimum income schemes, child protection, fight against poverty, undeclared work, social and wage dumping.

The UN Agenda 2030 SDGs should be implemented in Europe by incorporating them into European Economic Governance and Semester, the implementation of the EPSR and the EU’s post 2020 strategy.

Design and implementation of an ‘Industrial policy Made in Europe 2030’ with a focus on the social dimension and decarbonisation. EU Competition legislation should be revisited and adapted to European industrial specificities and the needs of industrial regions.

Deliver of a more inclusive, socially just transition for workers including digitalisation and automation, in which digital technologies improve working conditions and quality employment.

Set up EU investment tools and active labour market policies to support workers in sectors facing technological change and to mitigate disruptive effects. This should include initiatives towards a digital single market that is respectful of workers, their rights (to data protection, to disconnect, and to information, consultation and participation) and their working environment and conditions.

Ensure equal pay for equal work, achieve fair and equal working conditions and access to social & labour rights for non-standard workers, including for platform workers, and reform/interpret competition law to give self-employed and freelance workers the right to organise and bargain collectively.

Include a vision of zero fatal accidents at work and zero work-related cancer in a future EU strategy on occupational safety and health, also through further revision of the EU Carcinogens and Mutagens Directive.

Make climate action one of the first priorities of EU policy and increase the 2030 target to reach zero net emissions by 2050; including through consulting trade unions on, and involving them in, a European Green Deal.  This should be based on a proactive and inclusive EU governance, matching environmental with economic and social aspects.

Achieve fair labour mobility, based on equal treatment of workers, and fight against abuses, through:

A comprehensive migration and asylum agenda for Europe that commits all member states; based on solidarity, responsibility and full respect of human rights, including the revision of the Dublin Regulations and the support to search and rescue at sea.

Establish safe and legal channels for economic migration, and an integration and inclusion policy based on equal treatment of migrants in the labour market; including through the full implementation of the Partnership for Integration signed by the European Commission and the social partners in 2017.

Full trade union involvement in consultations with the Commission on the mandate, progress, conclusion, implementation and enforcement of trade negotiations.

Ensure full respect of European social rights and values, of social dialogue and social partners involvement in the European Neighbourhood Policy, in enlargement policy, and in the EuroMed region.

Strengthen and reform multilateralism and defend European economic, social and environmental values and policies within the multilateral institutions and fora, including the G7 and G20.

Fully protect jobs and workers’ rights and protection, today and in the future, in the framework of Brexit negotiations and future agreements.