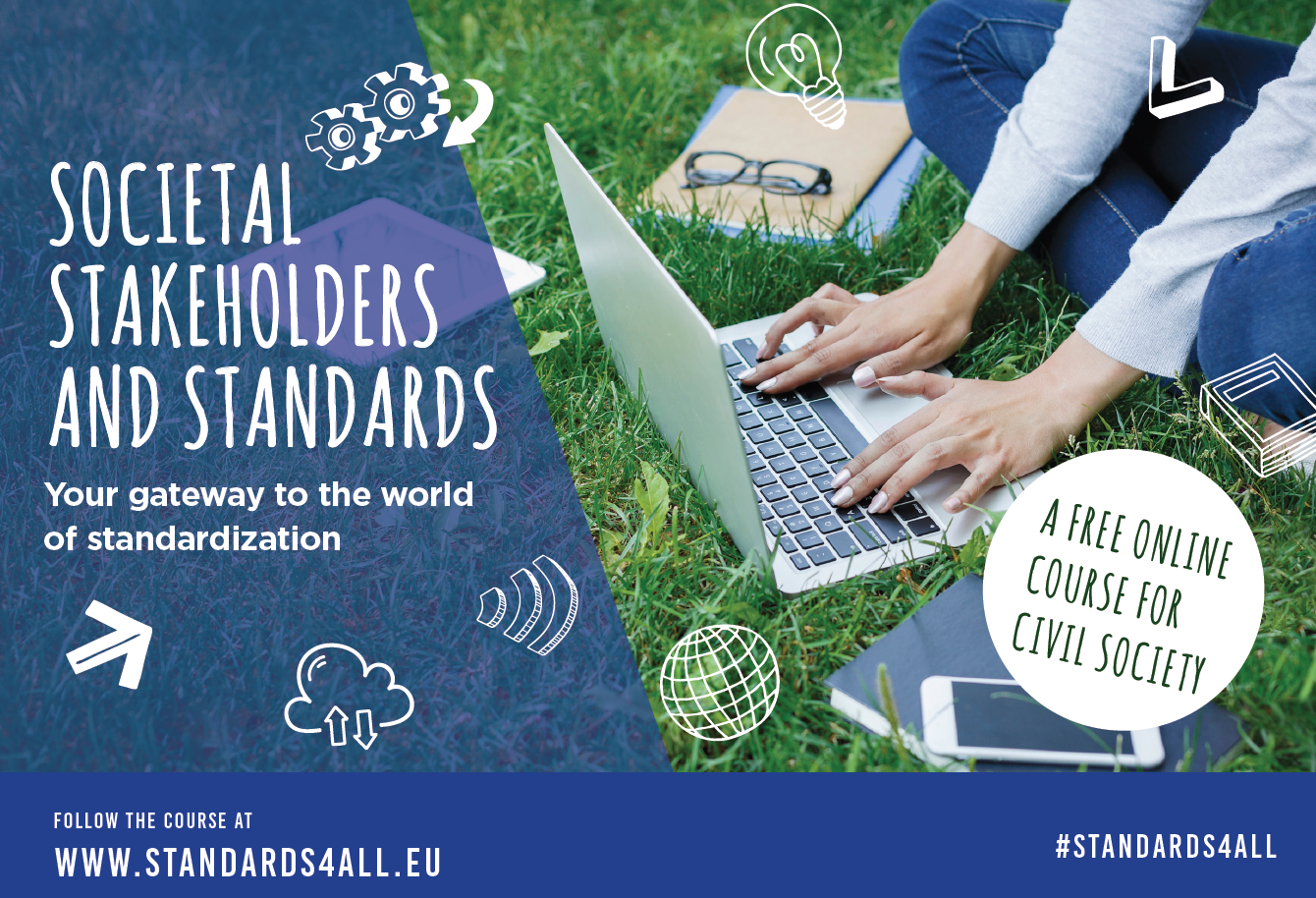 A new free online course which aims to explain the complex world of standards in clear and simple terms has been launched. It is designed to be used by everyone, regardless of their level of knowledge or their background.

Standards have a broad impact on society and contribute to making our everyday lives safer. In Europe, regulators have turned to standards to support the implementation of laws and policies, including in areas of public interest. This makes it even more important for civil society to engage and participate in standardization.

Three organisations have a special role in conveying the needs of civil society in the development of standards in Europe and internationally:

Build YOUR expertise, increase your knowledge and influence!

ANEC, ECOS and ETUC have joined with CEN-CENELEC to develop a free, interactive eLearning course that gives clear and straightforward information about standards and the standardization process in Europe, as well as at the national and international levels.

The course contains several modules to help users learn about standards, their development and the key role they play in protecting consumers, workers and the environment. It further demonstrates the importance for civil society to engage in standardization in order to improve, strengthen and add legitimacy to the European Standardization System.

If you want to discover the world of standards, this training is for you! Follow our course and find out why standards are relevant to you, and how you can participate in developing standards that benefit all!

The course can be found at the link: www.standards4all.eu.

The eLearning course is launched as part of the celebration of World Standards Day 2018, a day when the standards community pays collective tribute to the efforts of all experts involved in the development of standards worldwide. This year’s theme is ‘Standards meet the Future’, as today’s rapid pace of change, brought by a new generation of smart technologies, will need standards to help pave the way into a new era. But standards will ‘meet the Future’ only if they reflect the needs of civil society. Standards that reflect the needs and expectations of consumers, safeguard the health and safety of workers, and ensure environmental protection – beyond facilitating business opportunities – can also offer Europe an advantage on the global stage.

ANEC is the European consumer voice in standardisation, open to the representation of national consumer organisations in 34 countries. ANEC defends consumer interests in standardisation and the use of standards, and in the setting of policy or legislation that refers to standards. • www.anec.eu

The European Committee for Standardization (“CEN”) and the European Committee for Electrotechnical Standardization (“CENELEC”) are two officially recognized European Standardization Organizations under Regulation 1025/2012 on European Standardisation[1]. CEN and CENELEC develop European Standards (ENs) and other technical deliverables through a transparent and consensus-driven process to meet the needs of European stakeholders, such as industry and service providers, including SMEs, public authorities and regulators, academia, research centres and societal stakeholders’ organizations. CEN and CENELEC membership is composed of National Standardization Bodies and National Committees from 34 countries, whose national networks involves more than 100 000 technical experts from industry, business & commercial federations (including SMEs), research, consumer organizations, environmental groups and other societal stakeholders. www.cencenelec.eu 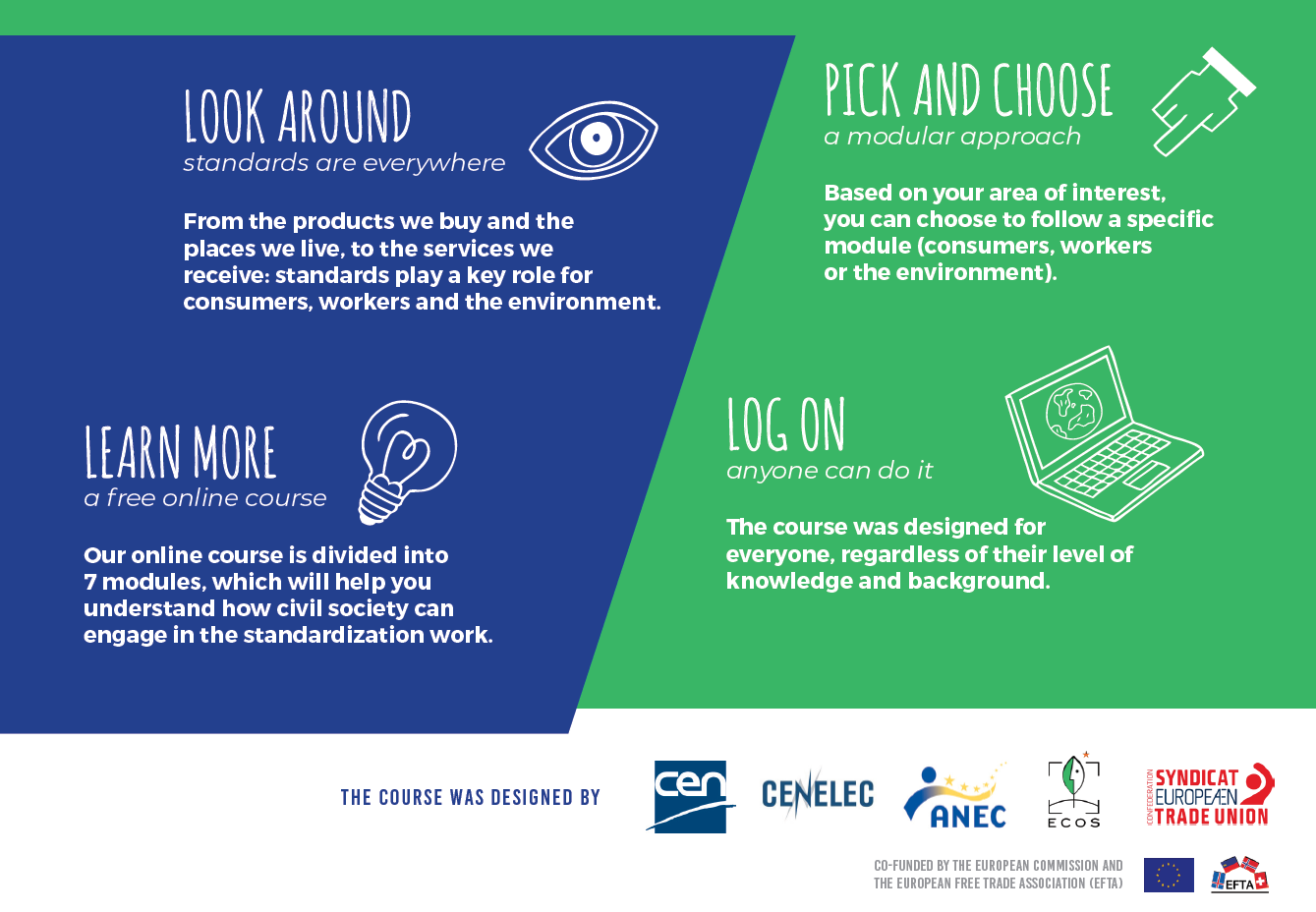