Statement to the EU-Ukraine Association Council 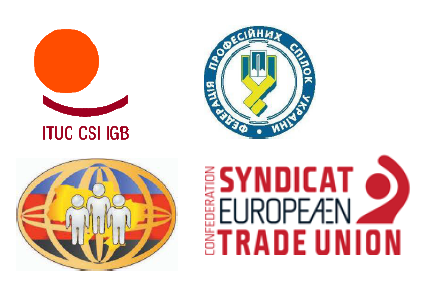 On the occasion of the EU-Ukraine Association Council that meets to assess the progress Ukraine has achieved in implementation of the EU-Ukraine Association Agreement, the European and Ukrainian trade unions condemn the recent violations of this Agreement by the government of Ukraine, which introduced a number of amendments to the labour laws without any consultations with social partners as required by national and international legislation.

The Ukrainian economy is in disastrous shape. Many industrial enterprises are on the verge of bankruptcy. Payments for external debt constitute one third of the budget. Millions of jobs have been destroyed. Poverty is growing. Wages are the lowest in Europe. At the same time, the salaries of state managers are a hundred times higher than those of average workers. Wage arrears amount to billions of hryvnia. Corruption is widespread, and the courts are dysfunctional. Millions of people leave Ukraine in search of better life opportunities abroad, including in countries of the European Union.

Addressing these pressing issues without proper social dialogue will only aggravate the situation and exacerbate social tensions. The Ukrainian and European trade union movements have condemned this approach of the government and expressed their concerns and indignation to the Ukrainian authorities (link). Further consultations were organised with the EU officials to provide them with correct and impartial information about reforms that the government pretends are EU-driven.

The All-Ukrainian Trade Union Assembly of 16 January adopted a joint declaration, the demands of which we fully support.

No legislative initiatives in the field of industrial relations can be introduced without proper and genuine social dialogue. Social dialogue is a key EU principle, and by developing and submitting amendments to the labour laws without proper consultation with the social partners, the government not only violates the Constitution of Ukraine and national legislation on social dialogue, consultations and the law on the Cabinet of Ministers, but also violates its obligations under the EU Association agreement.

- The expansion and encouragement of precarious employment, the drastic reduction of overtime pay, reduction of existing limitations to overtime work, abolition of some social guarantees and reduced protection for mothers with small children; and

In retaliation for trade union protests, state officials have started attacking and waging defamation campaigns against trade union organisations and their leaders in public. We condemn these attacks and call on the government to:

We call on EU leaders to make sure that the EU values and principles are placed at the heart of any dialogue with the Ukrainian authorities and that the progress of the implementation of the EU Association Agreement is assessed against the benchmarks of the following:

We share the aspirations for a European future of the Ukrainian people – aspirations for fairness and justice, equal treatment and equal opportunities, decent life, work and adequate incomes and social protection for all. We express our full solidarity with Ukrainian workers.