The European Trade Union Confederation (ETUC) calls on the UN International Labour Organisation (ILO) – which marks its 100th anniversary in June – to redouble its efforts to ensure decent work in a global economy radically changed by free trade and deregulation, climate change and digitalisation.

With 16 million unemployed and 21.5 million in working poverty in the EU, the ETUC is working to persuade the ILO to adopt a bold and forward-looking Declaration at its centenary conference in June to deliver a decent future of work.

“The world needs to work” said ETUC Confederal Secretary Esther Lynch “and it must benefit all those who do. In recent years those who make a profit out of other people’s work are taking an ever-larger share of the wealth and not living up to their responsibilities. Today work offers no guarantee of a way out of poverty.”

To achieve a strong Declaration and commitment to action the ETUC is taking part in a series of meetings aimed at helping to shape the ILO centenary conference:

“The ILO and the global community need to rise to the task of ensuring decent work in a future carbon-neutral, digital and automated global economy” added Esther Lynch, “and for all workers including those in precarious and non-standard employment.”

A report from the ILO on The Future of Work makes a number of important recommendations  including a universal entitlement to life-long learning, a Universal Labour Guarantee (of fundamental rights such as maximum hours at work and collective representation), and investing in decent and sustainable work (including incentives for job creation, digital infrastructure and supporting long-term investment).

The ETUC is working with the International Trade Union Confederation (ITUC) to achieve a positive outcome for the future of work from the ILO’s centenary. 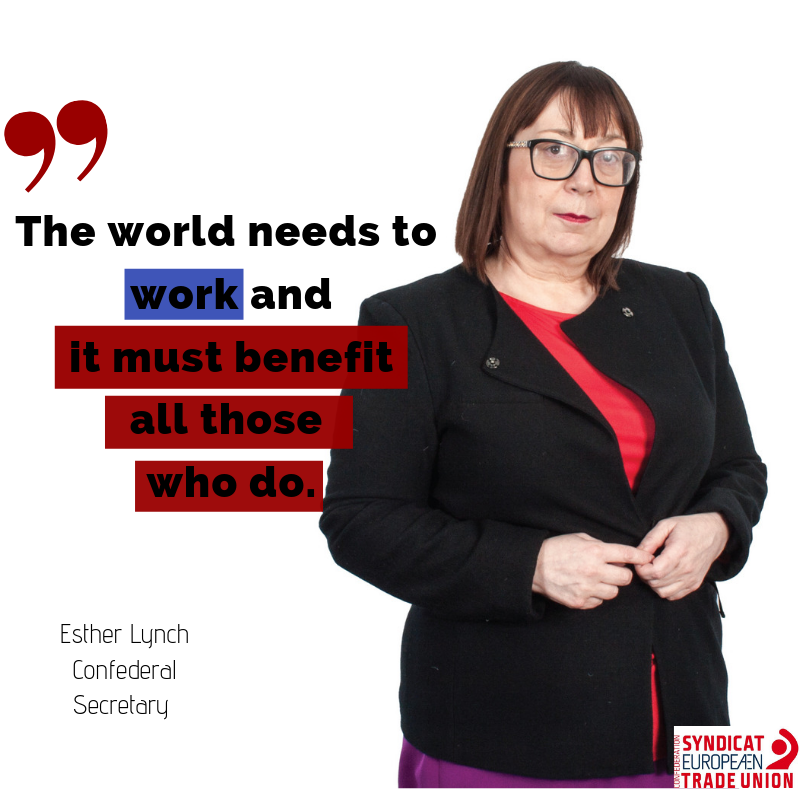