“Commissioner Schmit's proposal for a Directive is a positive step as it is the only way to achieve real change.

“The Directive requires member states to take action to promote collective bargaining, and have national action plans to increase coverage if less than  70% of workers are covered by a collective agreement. But workers are not guaranteed protection from employer reprisal when they join a union.

“The Directive requires member states to promote minimum wages that are adequate, but workers on minimum wages are not guaranteed the pay increases they need.

“Higher minimum wages and more collective bargaining can be achieved by amending the Directive.

“Trade unions will fight hard to secure the improvements needed from MEPs and Ministers.”

Key improvements that need to be made to the directive include:

National and European union leaders meeting at the ETUC Executive Committee tomorrow will discuss the Directive and how to respond.

More information on the ETUC’s proposals for the directive can be found here.

Background: the wage situation in Europe

Statutory minimum wages leave workers at risk of poverty in at least 16 EU member states and workers in six member states are worse off than 10 years ago. 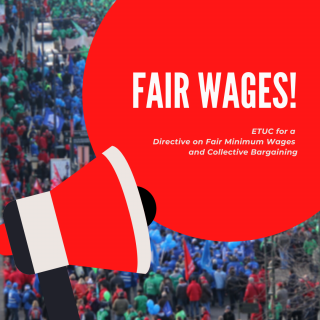