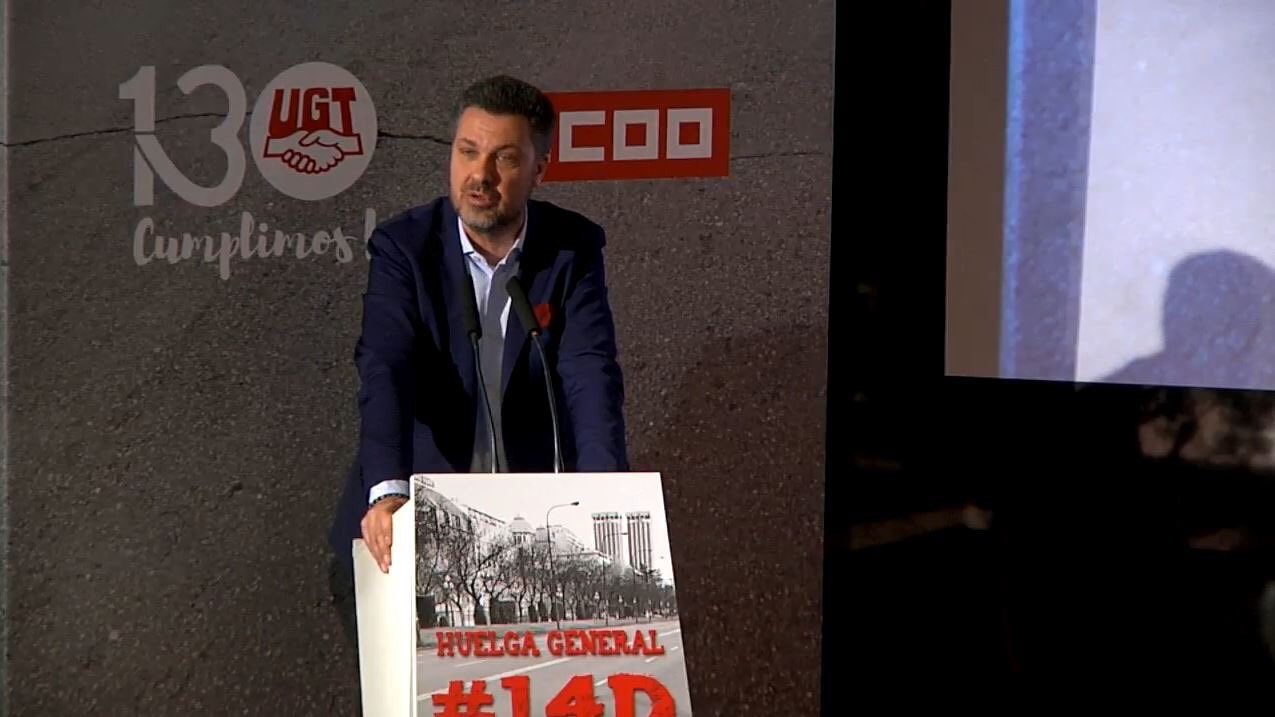 The warmest greetings from the ETUC and congratulations for the very important anniversary you are celebrating today.

The right to strike is a fundamental human and social right, and an essential tool for trade unions to build their power for achieving stronger rights and better working conditions for working people.

The right to strike has been recently under attack in several countries, particularly in Spain, and I would like to pay tribute to the extraordinary efforts you put in place to defend it.

Strike is not a crime! – was the slogan of our common battle, and we have to continue fighting to reaffirm such a right and the role of trade unions.

The event you are celebrating today is therefore very relevant for all of us and be sure the ETUC will be always on your side, mobilising with you to defend our rights and build together a better society, a better Europe.

This is nowadays more important than ever, since we are living through a very crucial moment for Europe and the European trade union movement.

The European elections and the ETUC Congress will take place next year.

They are spreading also among workers – but we would be wrong in blaming them – they are just worried about the future.

In fact, regions where such sentiments prevail are not the ones with more migrants – but with more unemployment, poverty, social exclusion – those more hit by crisis and globalisation.

It’s a responsibility of the trade union movement to defend democracy and the European project.

We have not been entirely successful in defending workers from crisis and austerity – in protecting labour market outsiders, such as young, precarious and non-standard workers.

We have to start from there, we need to put in place new strategies, we need to launch a trade union renewal.

To achieve all this, we have set 5 priorities – we want to deliver on, with your help.

First, we want to change the economic paradigm.

Moving from austerity and neoliberalism to a more progressive model.

It’s time to distribute wealth and profits to workers – to tackle inequalities and support sustainable growth.

We faced a dramatic drop in wages in the last decade – because of austerity and attacks on trade union power.

This hasn’t contributed to more productivity and competitiveness – on the contrary it has generated more recession and stagnation.

That’s why we launched our campaign for a Pay Rise for all European workers.

We need to address the wage divide within countries and between countries (East and West, South and North) – but also within multinational enterprises.

We need to use wage leverage to stop the brain drain and dumping – to stop precariousness and fragmentation in the labour market.

The best tool to achieve this is: stronger collective bargaining in sectors and companies.

After sustainable economy and wages – our third priority is just transition.

We as trade unions cannot simply follow these phenomena and intervene when the damage is done – in terms of job destruction and dismantling of workers’ protection and rights.

We need to prevent all this happening – we need to be part of the decision-making process – we need to shape the future.

To do this, we need EU and national resources available, investment, governance to set up a just transition process.

At the same time, we need to manage also the transformations in the labour market.

Being in touch with precarious – non-standard – self-employed workers.

Helping them – protecting them – organising and including them in the trade union movement.

This is also just transition, this is our major challenge – if we want to shape the future of trade unionism in Europe.

This brings me to the 4th priority, which is the need to reinstate the EU social model – hit by austerity and structural reforms.

We have achieved a great result with the Social Pillar – mainly thanks to the ETUC and our capacity for lobbying and negotiation.

But now it’s time to mobilise for implementation – to transform the 20 principles into law and concrete measures.

To achieve a Social Progress Protocol to be included in the EU Treaties and Law.

To launch a new Social Contract to reconnect Europe to working people.

Thank you very much indeed for your commitment and help – now it’s time to intensify our lobbying, to deliver on such initiatives before the EU elections.

Finally, it’s high time to change and deliver also on migration and mobility.

Shame on Europe and member states for their behaviour on refugees!

They have not been able nor willing to respect human rights – international conventions – basic human values.

And we are now back to the same tragedy – people again dying at sea.

With many governments refusing to sign the Global Compact on Migration and to revise the Dublin regulations.

We want a different Europe on migration – and we need to mobilise for it!

We need also to fight for integration, for equal treatment, against social dumping.

The only way to convince our members that migrants are not an enemy – is to provide everybody with a good job, a good salary, good social protection and rights.

We need to commit to this – and again, we need to be united in solidarity to deliver.

During recent years we have significantly strengthened our internal cooperation and coordination.

We have agreed on common policies by overcoming the existing differences between East and West, North and South.

We have created efficient networks and practices within the ETUC to involve and mobilise our affiliates.

And we have significantly increased our influence on institutions, at both EU and national level – by bringing the ETUC’s voice to the grass-roots, to the national level, where most decisions are taken.

We have succeeded in imposing, at least in some fields, our agenda.

Let me thank all of you, comrades of Commissiones and UGT, let me thank Pepe and Unai and all your leadership, for the great support you have secured to me and to the ETUC team in our battle in defence of European workers.

Now it’s time to mobilise again, and even more strongly, in the view of the ETUC Congress and the European elections.

We need to make our voice heard, by politicians and employers, and we need to show to our members that we can make a difference to them.

Having clear strategies and demands will help us in negotiating concrete results for workers.

But we will have also to mobilise for this.

That’s why we are planning a big European demonstration next spring, to make pressure on all decision makers and achieve a New Europe for Workers, as our Congress slogan says.

We want to shape the future of work.

And for this to happen, we need a strong trade union movement.

Trade unions able to cope with the challenges we have in front of us.

Trade unions able to anticipate the changes and to govern them.

Trade unions that participate in strengthening democracy and social progress in Europe.

With your help, in solidarity with each other, we will make it!

14.12.2018
Speech
In Trade Union rights
The event you are celebrating today is therefore very relevant for all of us and be sure the ETUC will be always on your side, mobilising with you to defend our rights and build together a better society, a better Europe.
Print