Women doing jobs requiring the same levels of skills, education and physical effort as jobs done by men are still being paid less despite over 45 years of EU equal pay legislation.

A comparison of wages in the manufacturing sector found that women producing white goods are paid significantly less than men making cars even though both jobs require the same competencies.

In Germany, women in the white goods sector doing manufacturing jobs of equal value to men in the car industry are paid on average €865 per month less (gross).

In Romania, women working in the white goods industry earn €244 less per month on average (net) then men in the car industry.

The examples – provided by ETUC affiliate industriAll Europe - highlight how deep-seated bias about the value of jobs predominantly done by women continues to be the root cause of low pay for millions of workers, including the cleaners and carers on the Covid frontline.

The ETUC and industriAll Europe are calling for the ‘binding measures on gender pay transparency’ promised by Ursula von der Leyen to enable workers and trade unions to access information on criteria for deciding pay levels to help them negotiate equal pay for work of equal value.

In doing so, the EU would be following in the footsteps of New Zealand’s government who in November passed an amendment to the country’s Equal Pay Act which ensures wages for women are “determined by reference to what men would be paid to do the same work abstracting from skills, responsibility, conditions and degrees of effort.”

Similar clauses were included in a 3,000-word model directive recently published by the ETUC to provide inspiration to the European Commission on how this can be achieved.

“It is unacceptable that women performing similar jobs in our industries compared to their male counterparts are paid less. Women workers across Europe, regardless of their sector of work, shouldn’t have to wait any longer for pay transparency and fair pay.”

“Many production workers across Europe have continued to work through lockdowns as their work was defined as ‘essential work’. They have kept goods flowing and many companies adapted production to fill urgently needed gaps in medical and other goods. We owe it to both men and women workers that the full value of their work is recognized.”

“Comparing the pay of women and men in the manufacturing sector shows clearly how women are paid less even when their jobs require the same levels of skill and physical effort as those of men.

“The Covid crisis has also exposed the deep-rooted bias behind wages for professions dominated by women, with carers and cleaners recognised as ‘essential’ despite being amongst the lowest paid.

“We need the European Commission to deliver on their promise of a pay transparency directive to ensure that men and women finally receive equal remuneration for work of equal value.” 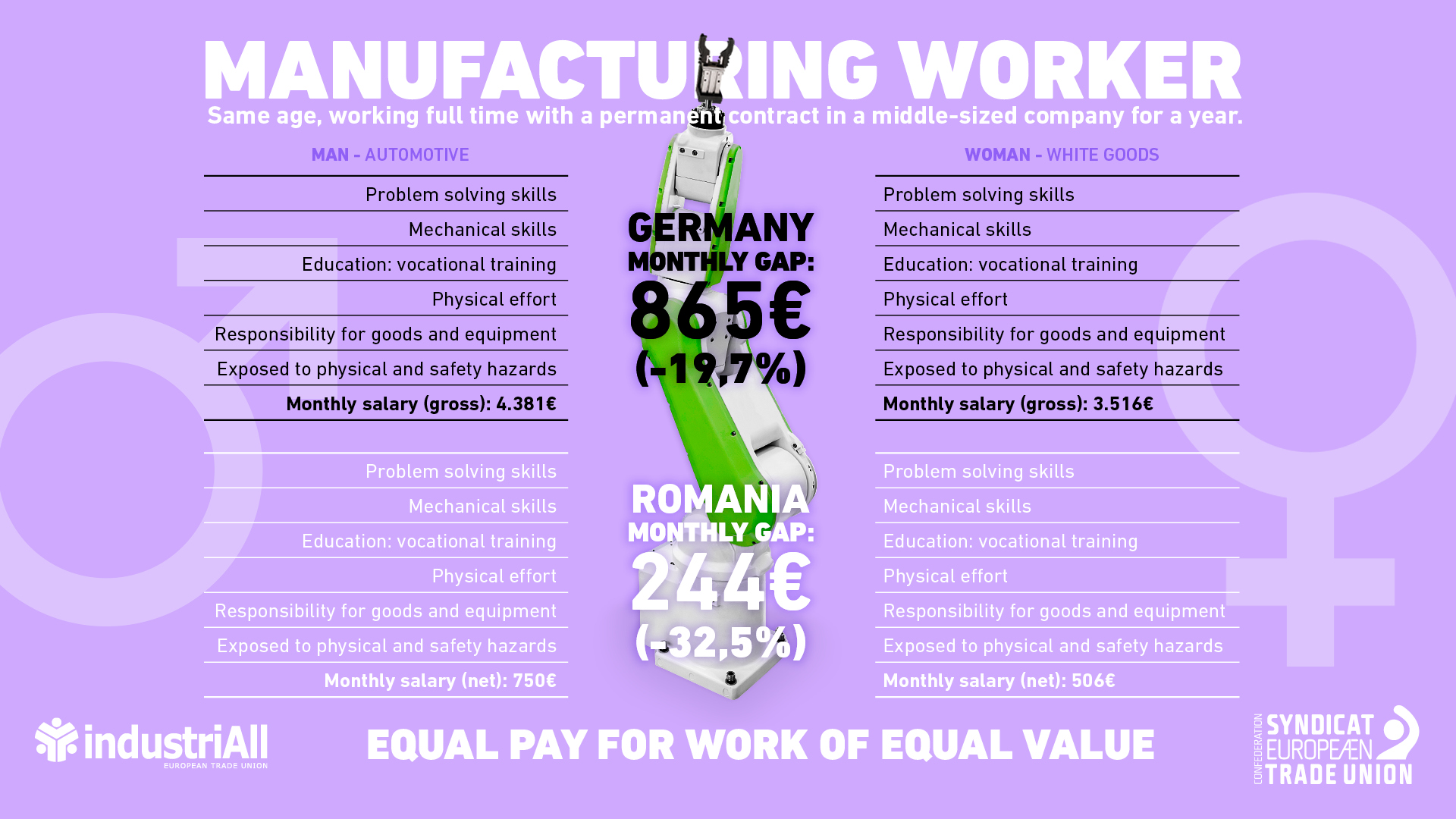