Greta Thunberg, the 16-year-old Swedish school student who started the ‘Friday’s for Future’ movement, has called for her peers around the world to join her to demonstrate outside national parliaments or local government buildings. Some 727 protests are scheduled across Europe, including another major demonstration in Brussels which will begin outside International Trade Union House.

A banner reading ‘No jobs on a dead planet – workers support climate action’ will be hung on the front of the building to show solidarity with the thousands of protestors expected.

Trade unions and their youth organisations stand with the students in calling on countries to fulfill their obligations under the Paris Agreement, which commits them to limit any temperature rise to well below 2 degrees (and pursue efforts to limit it to 1.5 degrees) this century by delivering a “just transition” to a green economy and society. The European trade union movement has been fighting for many years to build a socially fair low-carbon society: the ETUC and its affiliates call on the EU to adopt an objective to reach zero-net emissions by 2050.

Luca Visentini, General Secretary of the European Trade Union Confederation said “Congratulations to all young people who are taking action for our planet. Trade unions strongly support their call for more urgency and ambition in tackling climate change. We have a duty to leave future generations a living planet and a decent society. Trade unions know from our history that we cannot simply rely on politicians to deliver. Trade unions would not exist were it not for working people coming together to demand social justice. For that reason we salute and we support young people calling for climate justice and we encourage our young members to keep on supporting this movement.”

IndustriAll Europe general secretary Luc Triangle said: “We stand with the young people protesting today in calling on politicians to urgently deliver on their Paris promise of a just transition to a sustainable economy because there are no jobs on a dead planet. There is no doubt that climate change requires another industrial revolution and a just transition is the only way to ensure that doesn’t come at the cost of jobs and prosperity. It’s time policy makers stopped paying lip service to this principle and followed these young people in taking action.”

IndustriAll Europe recently published a policy briefing on how energy intensive industries can contribute to decarbonising the economy: https://news.industriall-europe.eu/content/documents/upload/2019/2/636848762829130521_BRIEFING%20-%20A%20just%20transition%20to%20a%20low%20carbon%20economy.pdf 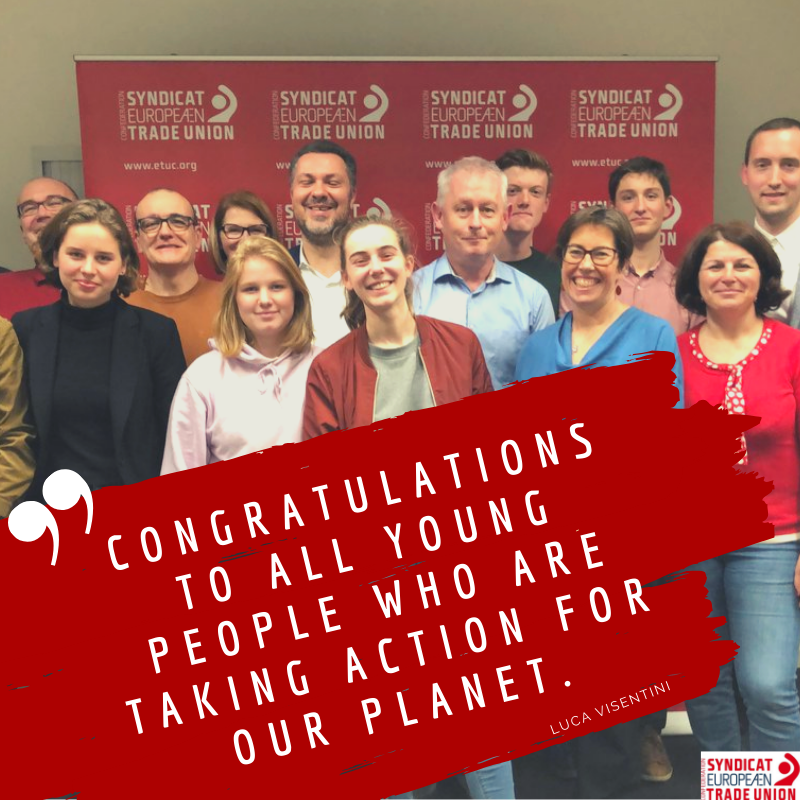