Commenting on 'The Rome Declaration', in which 27 EU member States "pledge to work towards ... a social Europe ... which ...promotes economic and social progress as well as cohesion and convergence...equality between women and men...rights and equal opportunities for all; ...which fights unemployment, discrimination, social exclusion and poverty" and refers to the "key role of social partners",  Luca Visentini, General Secretary of the European Trade Union Confederation (ETUC), who was present at the signing, said:

"The Rome Declaration offers some hope for the future of the EU. Good words on paper need to be put into practice. The test will come soon with the publication in April of proposals for the new 'European Pillar of Social Rights', in May with new economic policy recommendations, and later in the year at the EU Social Summit in Gothenburg."

"Social partners have significantly contributed to this new approach to the social dimension of the EU, with their joint declaration presented yesterday to EU leaders at the extraordinary social summit. The need for Social Europe and for a pay rise have been emphasised in the ceremony for EU60 today, and this is a great success for the trade union movement."

"Workers need to see concrete measures to redress the enormous damage done to living standards, and hope for the future, by the financial crisis and the disasterous years of austerity-for-some which followed." 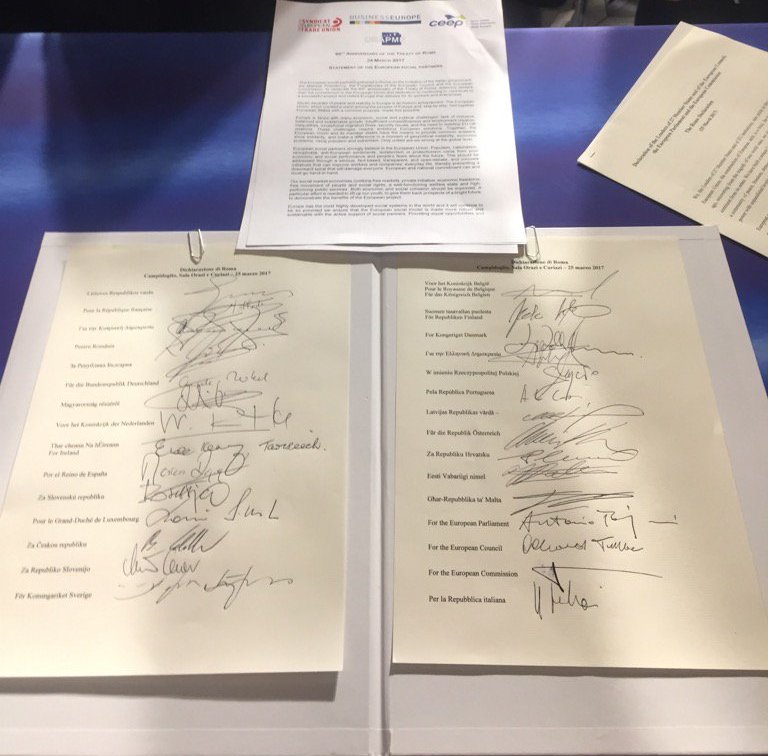