For a fair and just Company Law Package!

In the final round of negotiations on the company law package, Member States have to guarantee that the directive protects workers’ rights, tackles abuses and prevents the setup of letterbox companies. The Directive goes to the next round of ‘trilogue’ negotiations (between the three European Union (EU) institutions Commission, Council and Parliament) on 5 March, preceded by a meeting of member state diplomats (COREPER) on 1 March.

The European Trade Union Confederation (ETUC) calls on the Justice Ministers to agree with the European Parliament position on the following:

“It’s a simple matter of justice” said Peter Scherrer, Deputy General Secretary of the ETUC. ”If the EU is making it easier for companies to be mobile, they must offer protection to the workers’ involved. The right to information and consultation and to maintain board participation rights are frankly the absolute minimum, alongside stopping abuses of the to-be-made-easier-process leading to circumvention of workers’ rights, avoidance of tax or social security contributions.”

“Letterbox companies are already a major headache, European governments should not make matters worse. The Ministers should also consult their Employment colleagues on all the employment rights aspects of this draft directive.”

The European Parliament has already a position safeguarding worker’s rights and closing the loopholes in the European Commission’s original proposal. The ETUC calls on the Parliament not to give up the important improvements it has introduced in the Directive. Now it is up to the member states to reach a more reasonable and balanced position.

“We need a fair directive, not a bad compromise” added Scherrer.

The ETUC continues to stress the necessity not to approve the agreement reached on the other part of the so-called company law package (a Directive on the use of digital tools and processes in company law) until agreement is also reached on this Directive. 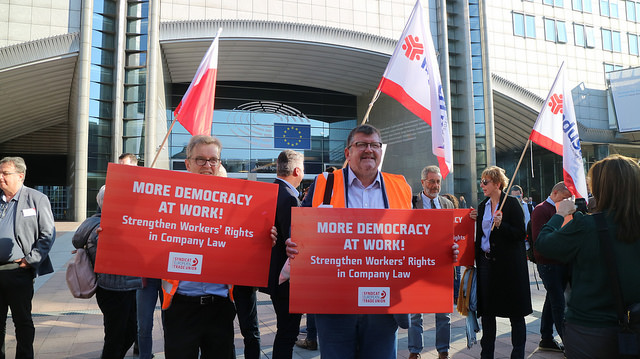