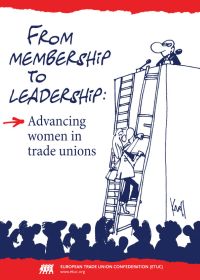 The European Trade Union Confederation (ETUC) congratulates the European Parliament on the adoption, yesterday, of three important resolutions on gender equality and women’s rights, focusing on the impact that the economic crisis is having on women, the elimination of gender stereotypes and the situation of women in North Africa.

At a time when we risk seeing a halt or, worse, a reversal in many of the gains made towards equality between women and men in the workplace and in society in general, the ETUC welcomes the attention that the European Parliament is giving to these matters and the broad cross-party political support given to these resolutions.

Representatives from the European Council were notable by their absence from the important plenary debate to mark International Women’s Day held prior to adopting these key resolutions.

ETUC Confederal Secretary Claudia Menne said: “The trade union movement has for some time been warning about the double impact of the crisis and austerity measures on women. We welcome the leadership the European Parliament has shown in its commitment to placing this matter on the political agenda. We also support the call by MEPs for concrete action at EU level to combat gender stereotypes and for the EU to do more to support women in North Africa, who were instrumental in the Arab Spring, in securing their rights. The ETUC calls on other European institutions and the member states’ governments to take heed of the Parliament’s messages and act on their recommendations.”