Trade unions are urging Ursula von der Leyen to name the date for a pay transparency directive as the Commission President marks a year in office without delivering her “100 day” promise to women.

President von der Leyen took office on December 1 last year on a pledge to “table measures to introduce binding pay transparency measures” within “the first 100 days of my mandate” in order to tackle the EU’s 15% gender pay gap.

It was just one of only four policies she prioritised for delivery before March 10 in her political guidelines.

But a full year after the new Commission began work, and 266 days after its self-imposed deadline, women are still waiting for action - and the promised measures have now been further delayed amid pressure on the President to abandon her promise.

Pay transparency measures – “passionately opposed” by employers’ lobbying groups – were due to be presented on December 15 but have now completely disappeared from the Commission’s latest legislative calendar.

It comes after the Commission cast the initiative into doubt in a draft work programme which said: “Anything of substance will inevitably mean more administrative burden for companies.”

Timeline of Commission delays over its pay transparency promise

In a bid to end the delay, the ETUC commissioned legal experts to draft a 3,000-word text for a pay transparency directive that the Commission can use.

Women in the EU will be waiting until 2104 for equal pay without action, our research reveals.

“The election of the first woman president of the European Commission on a pledge to prioritise pay transparency brought hope of real action to tackle the EU’s scandalous gender pay gap.

“With low-paid women making-up the majority of frontline Covid workers, it’s couldn’t be more important to address the systematic undervaluing of women’s work compared to that of men. We owe it to women who have worked through the COVID crisis to deliver equal pay for work of equal value.

“We still believe President von der Leyen wants to deliver on her promise but it’s clear the Commission is coming under considerable pressure to delay, water down and ultimately drop pay transparency.

“We call on the Commission to name a date for a directive that bans pay secrecy clauses and empowers women and their trade unions to find and fix the biases behind pay inequality.” 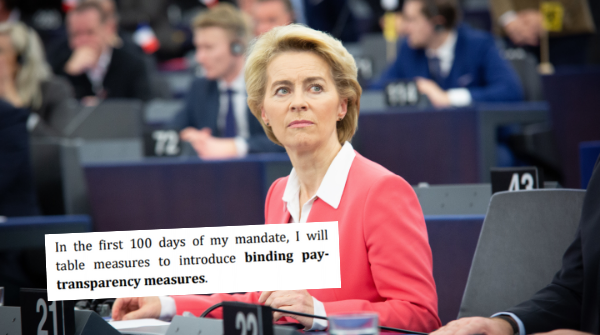