Over 10 per cent of the EU’s population are relying on the recovery fund to avoid or escape unemployment, trade unions have told national leaders ahead of a crucial EU summit.

The European Trade Union Confederation has written to the leaders of the EU institutions and all 27 heads of state to urge them not to further delay adoption of the 750bn Euro package needed to save and create jobs.

The ETUC reminds leaders that there are currently:

“Together these are over 60 million reasons to launch an EU Recovery Plan now. The Recovery Plan is probably the most important decision to be taken by the European Union for more than a decade and cannot be postponed again. Delaying it risks pushing millions into unemployment at a financial cost to governments far higher than funding the recovery.”

The ETUC also calls on EU leaders to defend certain red lines during negotiations on the package:

The full letter is attached. 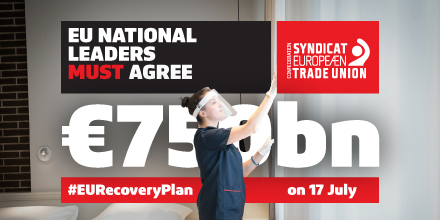