Mobilisation week - You've made it a real success!

Mobilisation week - You've made it a real success!

Large participation, great coverage and to the point contributions: The ETUC/ETUF week of mobilisation for more democracy at work.

The ETUC and European Trade Union Federations kicked off the week of mobilisation for Democracy at Work, on Monday 23 November, with social media actions and by sending a letter to European Commissioner Nicolas Schmit. With this third letter the trade union movement reminded the responsibility of the European Commission as guardian of the Treaty European law to:

Affiliates and EWC were invited to send a similar letter to their labour minister and to relay the ETUC ETUFs action via social media. 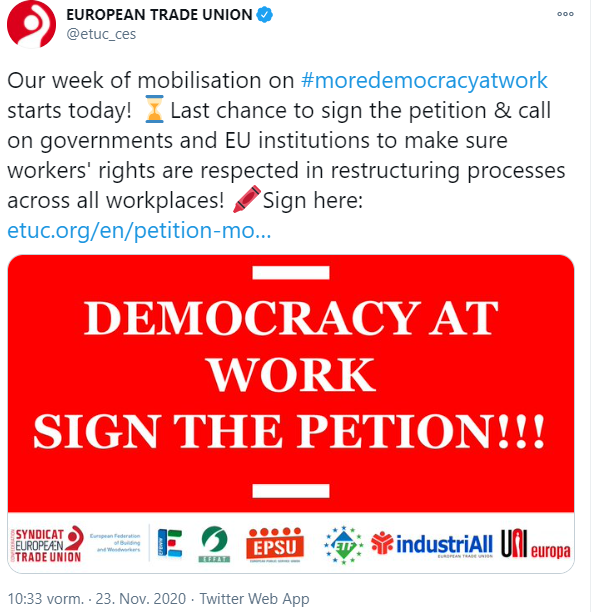 On Tuesday 24 November, IndustriAll Europe and EFBWW addressed the mobilization for Democracy at Work and passed on the key message of the petition during their executive committee meetings.

Wednesday 25 November was dedicated to empowering EWCs to fight for their rights to timely information and meaningful consultation. The ETUC and ETUF held a workshop on litigation with legal practitioners. More than 80 EWCs from all over Europe joined the webinar. We thank all the participants for their very valuable input and the thoughtful discussions. 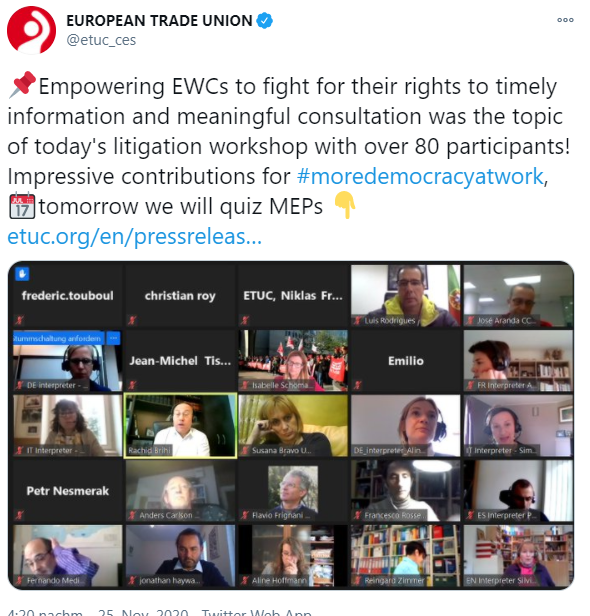 On Thursday 25 November, the ETUC and the General Secretaries of the European Trade Union Federations handed over the petition with more than 2 700 signatures to members of the European Parliament. The handover took place during an online event co-hosted by MEP Gaby Bischoff (S&D).

EWCs chairperson and EWC members presented their respective situations making the case for better enforcement and strengthening of EWC rights.

Several MEPs from different political groups took the floor and a total of 115 people joined the event. We look forward to an even closer cooperation with the European Parliament next year in the fight for more democracy at work. We want to thank everyone that took part in this week of mobilization for their endeavour and commitment. We especially thank all the European Trade Union Confederations for the good joint work this week. Keep up on the good work, together we will keep fighting for more workers’ involvement in Europe.