Madrid Declaration on 'The Rights of LGBTQI* People in the Workplace' 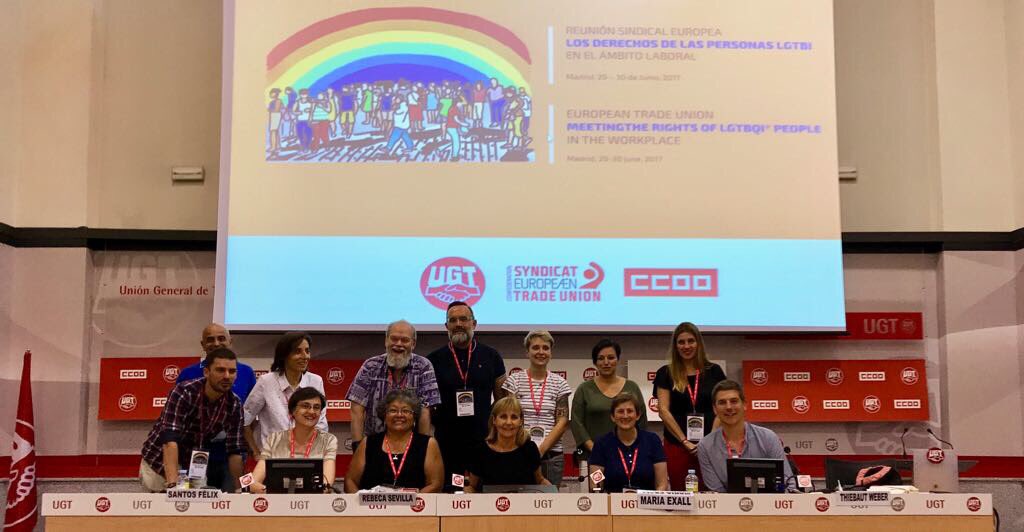 The European Trade Union Confederation celebrated the 2017 World Pride at a trade union conference, hosted and co-organised by the Spanish trade unions CC.OO and UGT, on ‘The Rights of LGBTQI* People in the Workplace’, which took place on 29-30 June.

The conference was an opportunity for the ETUC and its affiliated organisations, represented via the LGBTQI* rights trade union network, to strengthen their cooperation in the fight for human rights, trade union rights and equality for all workers.

They renewed their commitment to equal treatment and non-discrimination, respect and dignity for lesbian, gay, bisexual, trans-gendered questioning and intersex persons and workers (LGBTQI*), in the light of current events, including the aftermath of the crisis and the European Pillar of Social Rights. The momentum towards a more Social Europe is gathering force, and all workers, at all levels and with no exceptions, should benefit from it!

The Madrid Declaration, drafted and signed at the end of the trade union event, coinciding with World Pride, sets out current and forthcoming trade union actions to make Europe a better place for everyone, irrespective of their sexual orientation, gender identity or expression.

DECLARATION - THE RIGHTS OF LGBTQI* PEOPLE IN THE WORKPLACE

On the occasion of the 2017 World Pride, the European Trade Union Confederation and its LGBTQI* Rights Trade Union Network renew their commitment towards objectives of full equality and non-discrimination, and to seek that no-one within the workplace, on the labour market and the wider society will be bullied, harassed, discriminated (directly or indirectly) against or even killed on the basis of sexual orientation, gender identity, expression and/or family diversity. Trade union action must promote equality and contribute to eradicate LGBTQI phobia.

The ETUC and the LGBTQI* Rights Trade Union Network therefore:

- Call for the full transposition and implementation of the existing Directives, which trade unions monitor, support and promote, in ALL member states;

- Support the European Pillar of Social Rights and demand that its rights-based approach applies to all social and labour market policies;

- Call therefore on the Council of the European Union to finally approve the “horizontal directive”, thus complementing the existing EU legislative framework and guaranteeing substance to the Pillar;

- Stress the importance of awareness raising, formal and informal education and training initiatives, exchange of good practices on LGBTQI* civil and labour rights for social partners at all levels;

In recalling that LGBTQI* rights are also trade union rights, to be enjoyed by working people and guaranteed through collective bargaining and social dialogue, the ETUC and the LGBTQI* Rights Trade Union Network also

- Recognise the good work on LGBTQI* rights by many trade unions in campaigning for workplace rights and stress the need for continuing awareness raising actions across trade union organisations at all levels, including on discrimination linked to gender identity and/or expression;

- Encourage affiliates to include promotion of LGBTQI* labour and civil rights among issues for collective bargaining – within a broader strategy opposing all forms of discrimination at the workplace;

- Actively engage for European Social Partners to develop a joint approach against all discriminations and on equality and social inclusion measures for all workers;

- Stress the importance of trade unions’ supporting role to ensure affordable and effective access to courts in defence of LGBTQI* people.