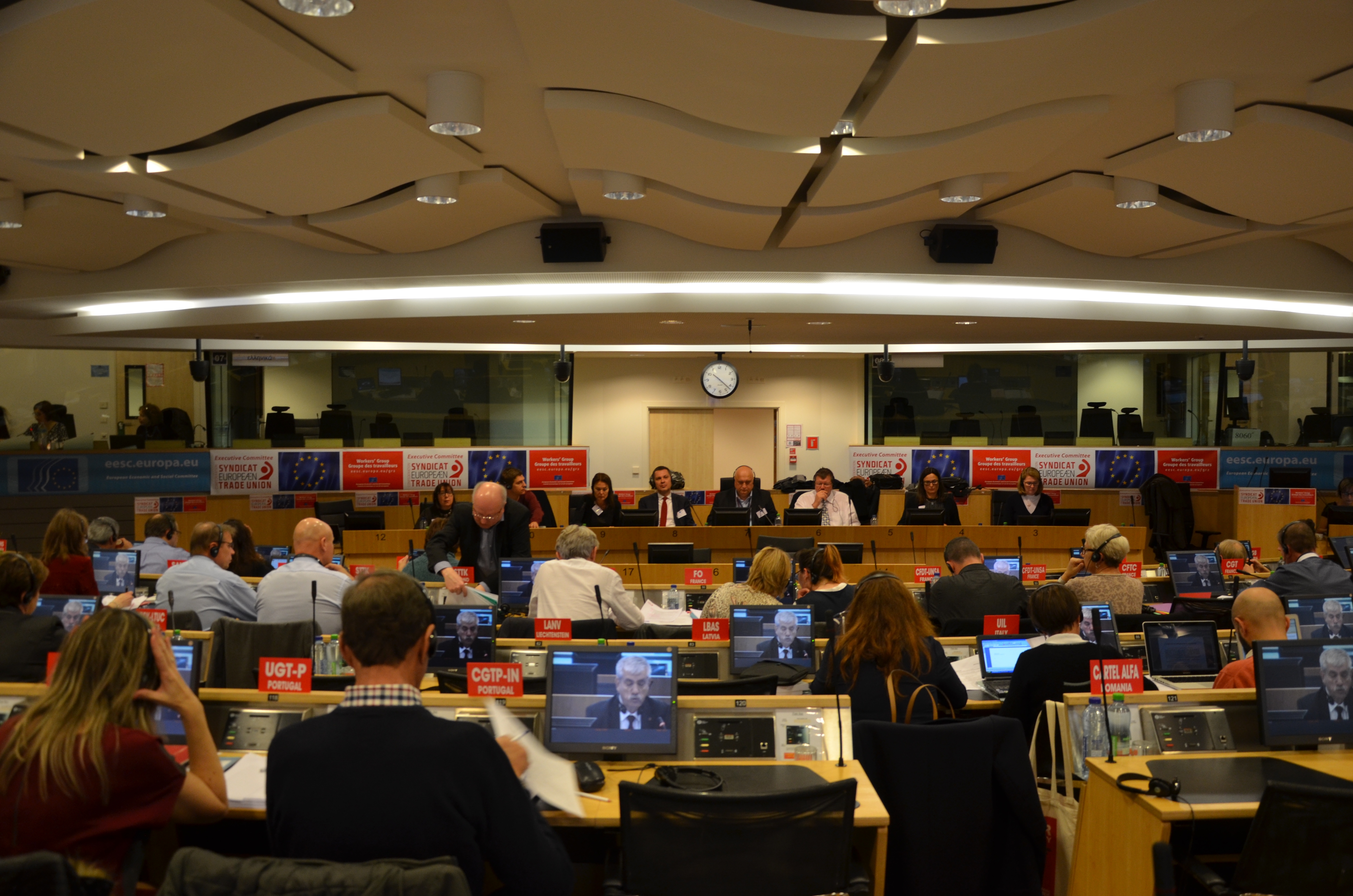 Adopted at the ETUC Executive Committee on 28-29 October 2015

On 21 October the Commission adopted a Recommendation for a Council Recommendation requiring euro area member states to establish national Competitiveness Boards. At the level of each (euro area) member state, these boards aim to:

b)    inform the wage-setting process by providing relevant information.

c)    monitor policies and formulate policy advice in the field of competitiveness.

d)    provide advice on the implementation of the Country Specific Recommendations.

The Commission’s Recommendation follows up on the so-called Five Presidents’ Report of June 2015, in which Commission President Juncker, along with the four presidents of other European institutions[1], called for the establishment of a euro-wide system of national ‘Competitiveness Authorities’. Independent experts would systematically “assess whether wages are evolving in line with productivity and compare with developments in other euro area countries and in the main comparable trading partners”. Moreover, they would also interfere with collective bargaining by requiring that “social partners should use the opinions of these Competitiveness Authorities as guidance during wage-setting negotiations”.

The ETUC notes that the Commission’s Recommendation does not go as far as the proposals put forward in the Five Presidents’ Report. The mandate of these ‘Competitiveness Boards’ (no longer called Competitiveness Authorities) is now to “inform” and “provide” relevant information to wage-setting processes. They would nonetheless be entitled to formulate policy advice, taking into account the broader euro-area and Union dimension.

Another noticeable shift is that (labour cost) comparisons concern ‘global’ competitors (in the short run) and not the other euro area countries.

At the same time however, serious objections remain.

Key objections of the ETUC

Competitiveness Boards are a dangerous solution addressing the wrong issue. With euro area exports exceeding imports by more than 3% of GDP, the euro area is not suffering from a lack of competitiveness. The euro area’s main problem is the (private) debt overhang inherited from a financial market-driven boom that went bust.

This cannot be addressed by trying to export our problems to the rest of the world. Squeezing wages will make matters worse by undermining internal demand and by triggering deflation. Meanwhile, export market gains will eventually be neutralised by currency appreciation or by weakening of the euro area’s trading partners’ economies.

The ETUC insists that European policy-makers abandon the narrative of (cost) competitiveness. Instead, they should embark on an expansionary and unconventional monetary policy financing a serious fiscal stimulus to ensure a meaningful and strong recovery, despite the lingering debt overhang.

Unbalancing an unbalanced governance system even further. The pillar of economic governance has been seriously strengthened over the past years. It now has a multitude of instruments at its disposal, ranging from the Fiscal Compact on controlling the draft budgetary plans to the macroeconomic excessive imbalances procedure. At the same time, the social pillar is languishing. This is showing up in a serious regression of social outcomes such as rising poverty and inequality rates. Establishing a system of Competitiveness Boards will contribute to a further unbalancing of the European Semester at the expense of social cohesion.

Social dialogue does not need another mainstream controller. While the Commission says it does not intend to intervene in wage-setting systems, its Recommendation is at the same time providing a possible basis to do so anyway, in the near future.

For example, its insistence on the fact that national Competitiveness Boards need to be statutory and grounded in national law is significant as it points to a legalistic approach to wage competitiveness. From there, we are only a hair’s breadth away from setting maximum wage standards for collective bargaining that are legally binding, or from questioning the validity of strike action related to bargaining outside the wage standards set by the Competitiveness Board. In a similar vein, the Commission’s earlier announcement that its future progress report intends to see “whether the adoption of binding provisions appears necessary” is also ambiguous. This ambiguity becomes worrying when one reads in the accompanying Commission Communication (“On steps towards Completing Economic and Monetary Union”) that “if necessary in stage 2 (…) common principles by means of a binding instrument will be presented”.

The ETUC therefore rejects these Competitiveness Boards. Numerous institutions already exist that give the usual mainstream policy advice on wages to member states, such as the IMF, OECD, European Commission, and the European Central Bank. We do not accept any institution interfering with the autonomy of the social partners.

Getting the concept of competitiveness right. Wages and labour costs are but one item in a long list of factors influencing competitiveness, and certainly not the most important one. What really drives competitiveness, as was shown by recent IMF work[2], are innovation, quality products and services, research and development, education and training, availability of good public infrastructure and networks. Moreover, it can be shown that competitiveness and productivity rise in countries where strong social dialogue, industrial relations, social protection and cohesion are in place.

This is even more valid when, as is the case in the Commission’s Recommendation (see point 3 above), global competition is concerned. It is an illusion to think that member states can compete with low-wage countries and emerging economies such as China by cutting wages. It is even more of an illusion to use wage policy as a substitute for exchange rate policy to offset appreciation of the euro exchange rate. This only results in depressed domestic demand and deflation danger.

The ETUC is concerned that the Recommendation will affect existing bodies with similar tasks. Some countries have institutions, sometimes tripartite, that have a broader mandate, for example to provide economic analysis. It would be unacceptable if such institutions were reformed to fulfil these new requirements.

The ETUC also objects to the Commission's generally technocratic approach to policy-making, in other words allowing so-called independent experts to have responsibility for highly political issues (also in other areas such as 'better regulation'). Employers and workers alike are the first to be exposed to competition. Any discussion on competitiveness should therefore include the social partners.

Prevent mission expansion by the backdoor by amending the Recommendation. In no event must these boards be used as a means to undermine or inhibit collective bargaining, wage setting and the right to strike. To prevent Competitiveness Boards from being transformed into wage overlords, the text of the Commission’s Recommendation needs to be substantially improved and clarified. The ETUC will put forward a shortlist of key amendments seeking changes in the Recommendation. Such amendments will aim at:

[1] Presidents of the ECB, Euro-group, European Council and Parliament

[2] IMF World Economic Outlook April 2015 finds that deregulating labour markets has no impact on productivity performance while investing in research and development and education promotes productivity.

[3] The concept of a ‘wage safeguard clause’ includes the need to protect minimum wage setting at national and sectoral level along with collective bargaining and refers to the European regulation on ‘Macroeconomic excessive imbalances’ from 2011. In that regulation, it is stated that the regulation should be in compliance with article 152 of the Treaty and should take into account the national practice and institutions for wage formation.  It also stated that (based on article 28 of the Charter of Fundamental Rights, their functioning should not affect the right of workers (…)  to negotiate and conclude collective agreements at the appropriate levels or to take collective action in accordance with national law and practices. A third element of such clause would be to refer to article 153-5 stipulating the principle that Europe has no competence on pay, the latter safeguard however is not explicitly taken up in the regulation on Excessive Macroeconomic Imbalances. In the draft Communication, the two first elements of the wage safeguard clause are in but only at the level of recitals, not in the main body of the text which implies they have little or no legal value.