ETUC declaration on the Paris agreement on climate change 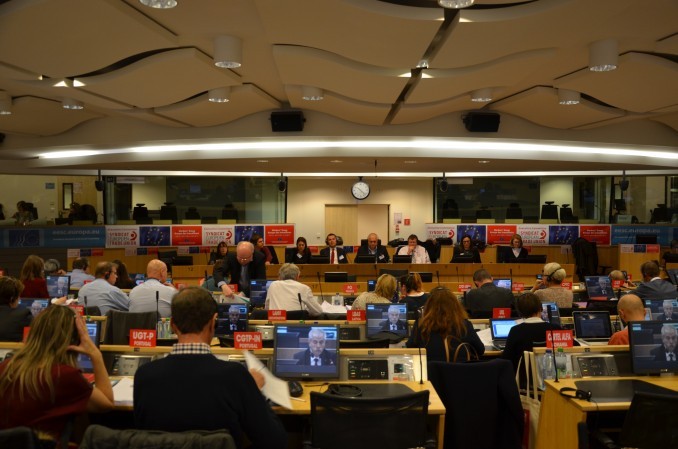 The COP 21 has delivered a universal agreement which will frame the long term action on climate change. The ETUC welcomes that agreement which concludes a long and complex negotiation process. Giving to the world a global instrument to tackle climate change is a major political breakthrough even though, as stressed below, this agreement is in many respects not as ambitious as we would have wished.

The ETUC welcomes the collective commitment from countries to hold global warming well below 2°C above pre-industrial levels and to pursue efforts to limit the temperature increase to 1.5 °C above pre-industrial levels. Setting these goals, clearly confirms that the world economy is now entering into a new era.  The core message of this multilateral agreement is unambiguous: reaching a global zero emission before the end of this century must be the shared ambition of humankind.

The ETUC welcomes the commitment from countries to communicate every five years their “nationally determined contributions” in order to present the efforts undertaken to reduce their emissions, bearing in mind that the ambition of the objectives will have to increase over time. The ETUC hopes that the “transparency framework” as well as the “global stocktake” will help to maintain the political pressure on countries to make their individual efforts more consistent with the collective objectives they committed to.  The ETUC also expects countries to increase over time the transparency and comparability of their contributions in order to create the conditions for a fair sharing of effort between all economies.

The ETUC would like to express its concerns about several shortcomings in the Paris agreement.

First, as acknowledged by the text itself, there is a worrying ambition gap between the collective ambition on the one hand, and the aggregate effect of the individual contributions on the other. Ascribing to the world a collective objective of keeping global warming below 1.5°C does not make sense if the individual contributions lead us to 3°C.  Bridging this gap must be an absolute priority for countries in the coming years, notably by tackling emissions sources which are not covered by the Paris agreement, like those coming from international transport.

Secondly, the Paris agreement is really vague about finance. The Paris agreement itself does not mention any specific goal or calendar, whereas the accompanying COP decision invites developed countries to continue their mobilization through 2025 while postponing to 2025 the adoption of a new quantified collective goal. Given the scale of the challenge ahead and the pace of the change observed, especially for vulnerable countries, waiting until 2025 to take a decision on the pathway to mobilise finance is a major source of disappointment. Countries, that have the capacities to do so, should urgently and significantly scale up the provision of finance to tackle climate change and its consequences in the poorest and most vulnerable countries.

Thirdly, the Paris agreement has failed to secure a clear commitment from the Parties that they will design and implement their climate policies with full respect for human rights and promoting a just transition for the workforce as well as decent and quality jobs. The reference inter alia to human rights, to gender equality, to intergenerational equity, and to just transition and decent work in the preamble of the text is indeed a significant acknowledgment of the importance of these principles in the context of climate action, but is not enough to ensure the wide public support that long term climate action will require. Tackling climate change requires a change of society, and this must be done in cooperation with people, not at the expense of their rights.

The Paris agreement has now framed what the global action against climate change will look like in the future. Keeping in mind its strengths and weaknesses, the ETUC and his affiliates will work to transform the political success of COP21 into a long term success for the planet and for workers and their communities. In the implementation of the Paris agreement, the ETUC will continue to defend a just transition towards a low-carbon economy which will maintain and create quality employment, promote workers’ participation and social dialogue, provide training for workers, strengthen social protection systems, and respect workers’ rights.