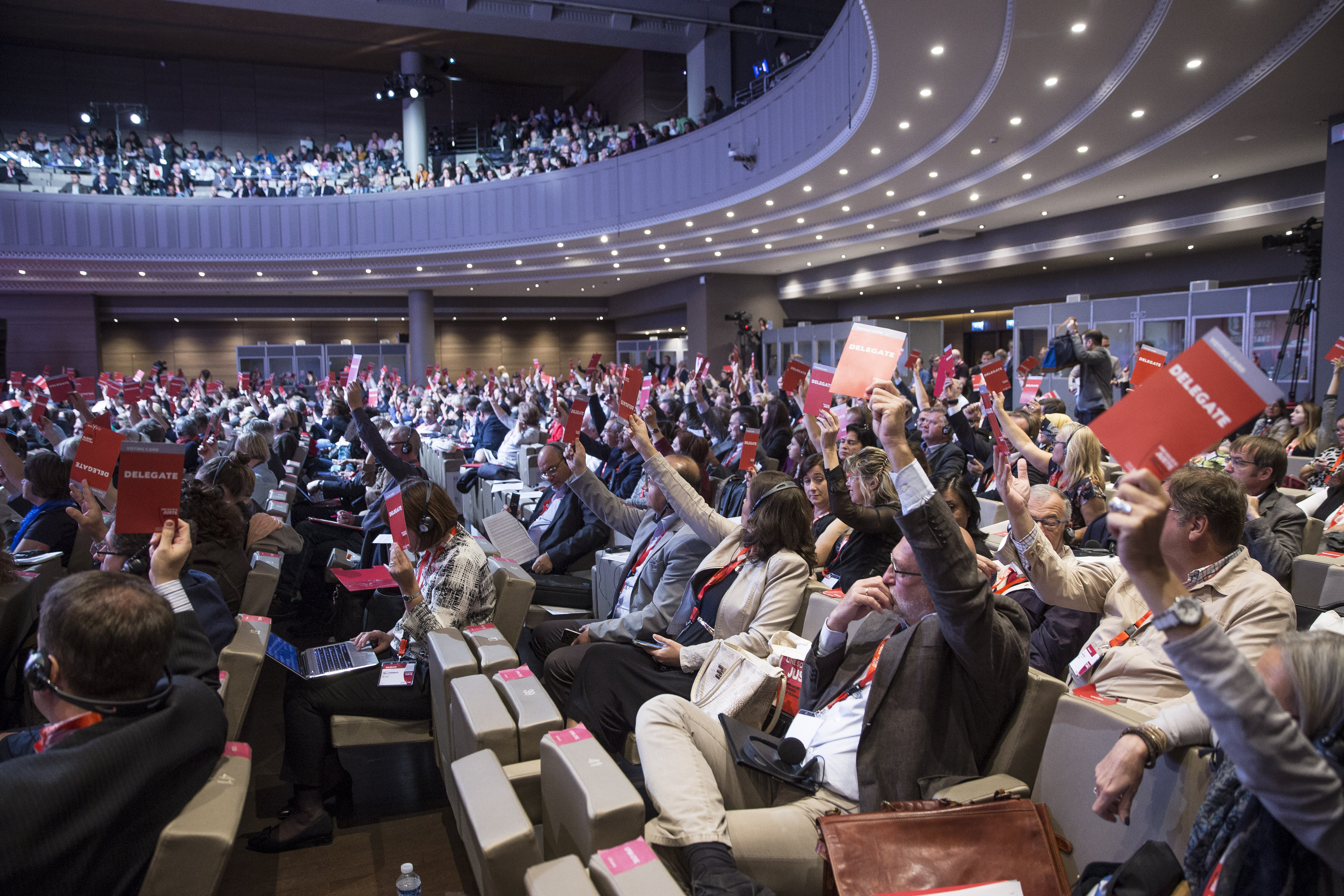 Congress notes that there will be a referendum on Britain’s continued membership of the European Union at some time in the next two years. The British government is currently seeking to renegotiate the relationship between the EU and the UK, and the British Prime Minister will be raising the issue at the European Council in October.

While the British trade union movement supports a European Union that delivers economic prosperity based on social justice, civil and human rights, equality for all and rights at work, the British government is seeking the dilution or even disappearance of EU wide social protections, not only as they apply in Britain but potentially across the EU as a whole. Concessions to the British government at this time will only serve to reinforce the increasing domination of neo-liberal ideology within many member states of the European Union and will inevitably prejudice the EU’s historic high standing within the labour movement. While already intensifying the crisis in Greece, forcing the marketization of our public services and overriding public policy positions of democratically elected governments, the EU must oppose any attempts to further alienate working people.

Protections for women and working parents; part-time, temporary and agency workers; in situations of redundancy and information and consultation; and a range of health and safety rights, including limitations on excessive hours and the creation of a work-life balance, are all under threat. Congress strongly rejects the attempts being made by the British Prime Minister to use the renegotiation process to undermine workers’ rights, to foster divisions around migration, and to promote a Europe for financial and business elites only.

Congress believes that Conservative attempts to obtain an ‘opt-out’ from EU-wide protections for UK workers, seeking to water down rights – especially the Working Time Directive and the Temporary Agency Workers Directive – and to impose a moratorium on future employment rights is wrong and counter-productive. Working people in Britain, faced with the prospect of a Europe based on insecurity at work and flexibility on employers’ terms, will have little enthusiasm to vote and be even less likely if they do, to vote to stay in the European Union.

UK Government attempts to restrict benefits for migrants coming from other parts of Europe would herald an attack on everyone’s in-work benefits both in Britain and across the EU. Some employers will always try to use new entrants to the labour market to drive down wages, and we believe the EU has a positive role to play in preventing this exploitation by providing a core of EU wide fundamental rights and labour standards, including the right to collective bargaining and the protection and enforcement of collective agreements. Congress believes that the only effective and acceptable ways to address concerns about free movement are to provide working people with the security against exploitation and undercutting that strong unions and decent rights at work, robustly enforced, would provide; and to expand access to public services and housing, using EU funding to follow migrants so that services can adapt to population changes.

Since the UK Government announced its plans for the EU Referendum, the TUC has campaigned and lobbied to expose the Government’s anti-worker rights agenda; to press employers to accept the need for a high level of workers’ rights as the quid pro quo for access to the single market; and to persuade other European Governments to reject the agenda of worse rights for working people, including freedom of movement, that the British Prime Minister is more or less openly advocating.

Congress welcomes what the ETUC and its affiliates have done in solidarity – and in their own interests - to ensure that their politicians understand that no concessions will satisfy the British Prime Minister’s Eurosceptic backbenchers or UKIP, and that such concessions would also undermine support for the European Union in other countries.

Congress commits to campaign and lobby against the UK Government’s attempts to further water down Social Europe.

Congress agrees that the ETUC should work closely with the TUC, European Industry Federations and national affiliates to press Governments, Members of the European Parliament and employers across Europe to reject attempts by the British Government to water down workers’ rights either in the UK or at European level.

Workers will not back or support a Europe that fails to protect and enhance the position of working people and civil society, seeks to negotiate secret deals like TTIP and CETA without reference to the values or needs of Europe’s citizens or one that solely works in the narrow interests of global corporations and finance capital.