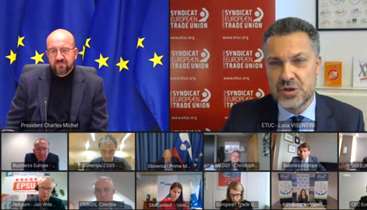 [To be checked against delivery]

Colleagues from the Social Partners,

After a year and a half of the pandemic, it’s really time to transform Europe's recovery into long-term sustainable growth, supporting more and better jobs, as for the title of the meeting today.

To do so, we need, first of all, to protect people’s health. A high rate of vaccination is fundamental for the economy to restart and for a safe return to work.

We reiterate our demand to the Commission and Member States to positively contribute to the global debate about patent waivers; and strengthening the productive and technological capacity in all countries.

We emphasise the need to continue improving investment in health and public services, not only in a situation of emergency, but in a structural way, within the recovery strategies of the EU.

We also ask you to put health and safety at work at the core of your policy agenda, and to implement ambitious legislative reforms in this field.

Paving the path for sustainable growth means first of all creating quality jobs.

Workers and trade unions in Europe cannot accept that we return to the same jobless recovery that we had before the pandemic.

The COVID outbreak has forced 23 million workers into unemployment and 40 million have been suspended from work.

We strongly welcomed the measures for labour protection that were put in place by the EU and Member States. We ask you to prolong them until it’s necessary and to turn them into more permanent support schemes for the future.

But now what matters the most is to make sure that every single euro of public money that is invested in the recovery is linked to the actual creation of quality jobs, in a way that is measurable and can be monitored – this requires a clear conditionality, not just a soft recommendation.

To be clear, we cannot accept that public money goes again just towards profits, and not to workers and society.

This time we cannot accept that the few jobs created are again precarious, not protected, underpaid.

And we cannot accept that there is no redistribution to working people and increased inequalities, while taxes on corporations are pushed downwards and tax evasion and avoidance are still too high.

For this not to happen again, the rules of our economic governance have to change, in order to facilitate investment and make sure that the protection of the environment and social justice become an integral part of the Stability and Growth Pact, the Semester, and the Next Generation EU.

We look with great sympathy at the recent EPSCO discussion about the introduction of Social Imbalances Procedures.

And we would like to remind all of us, that at the Porto Summit we have agreed that we would have gone beyond GDP, towards an economic model that is at the service of people’s wellbeing.

It’s time to take responsibility and action – in this context, trade unions will participate very proactively to the public consultation that the Commission has launched yesterday on the review of the fiscal rules.

We all agree that nobody must be left behind, but what does it mean in practice?

Trade unions support the objectives of the Green Deal, and we welcome the Just Transition Fund and the announced Recommendation on the social and employment aspects of the climate transition.

However, I want to reiterate that offering training and social assistance as a compensation to workers who are going to lose their jobs, is not enough.

A real just transition implies anticipating change, massive investment in quality job creation in the same communities where jobs are going to disappear.

It requires the EU to reform its internal competition rules and build strategic energy and industrial policies.

It requires environmental and social conditionalities to be embedded in all the EU, national and local spending regulations.

It requires a governance, a Just Transition Framework based on social dialogue, collective bargaining and workers participation.

The EU Social Partners are considering putting Just Transition at the core of their Social Dialogue work for the oncoming years, and we expect the same from the institutions.

A sound just transition is one of the fundamental elements of the reconstruction of the European Social Model, which has been disrupted by the austerity policies of the past.

It's time to deliver on the important ongoing legislative initiatives on Minimum Wages and Collective Bargaining, Pay Transparency and Health and Safety.

But it's also time to speed up other directives, such as the ones on Platform Work and on Due Diligence, building on existing legislation at national level.

On Platforms in particular, it's very important to recognise the presumption of employment with the reversal of the burden of prove, as it was ruled by most Court cases so far.

It's also important to extend the scope of this legislation to all non-standard workers in the digital and traditional economy, and to exclude collective bargaining for self-employed from competition law.

We expect strong initiatives for the implementation of the EPSR, based on the Action Plan adopted in Porto, but also initiatives to strengthen Social Dialogue, Tripartite Dialogue, as well as collective bargaining and workers participation at all levels.

This is essential to reinforce European democracy and build a fairer and more inclusive Future of Europe.

Too often Social Partners’ involvement is too poor, particularly at national level, too often trade unions are under attack from illiberal governments.

What happened a few days ago in Italy, where the building of the major trade union CGIL has been attacked by fascists and anti-vaxxers, shows that democracy is at risk in Europe.

We expect you, the EU and the national institutions, to actively promote democracy, to improve our involvement, and to protect us.