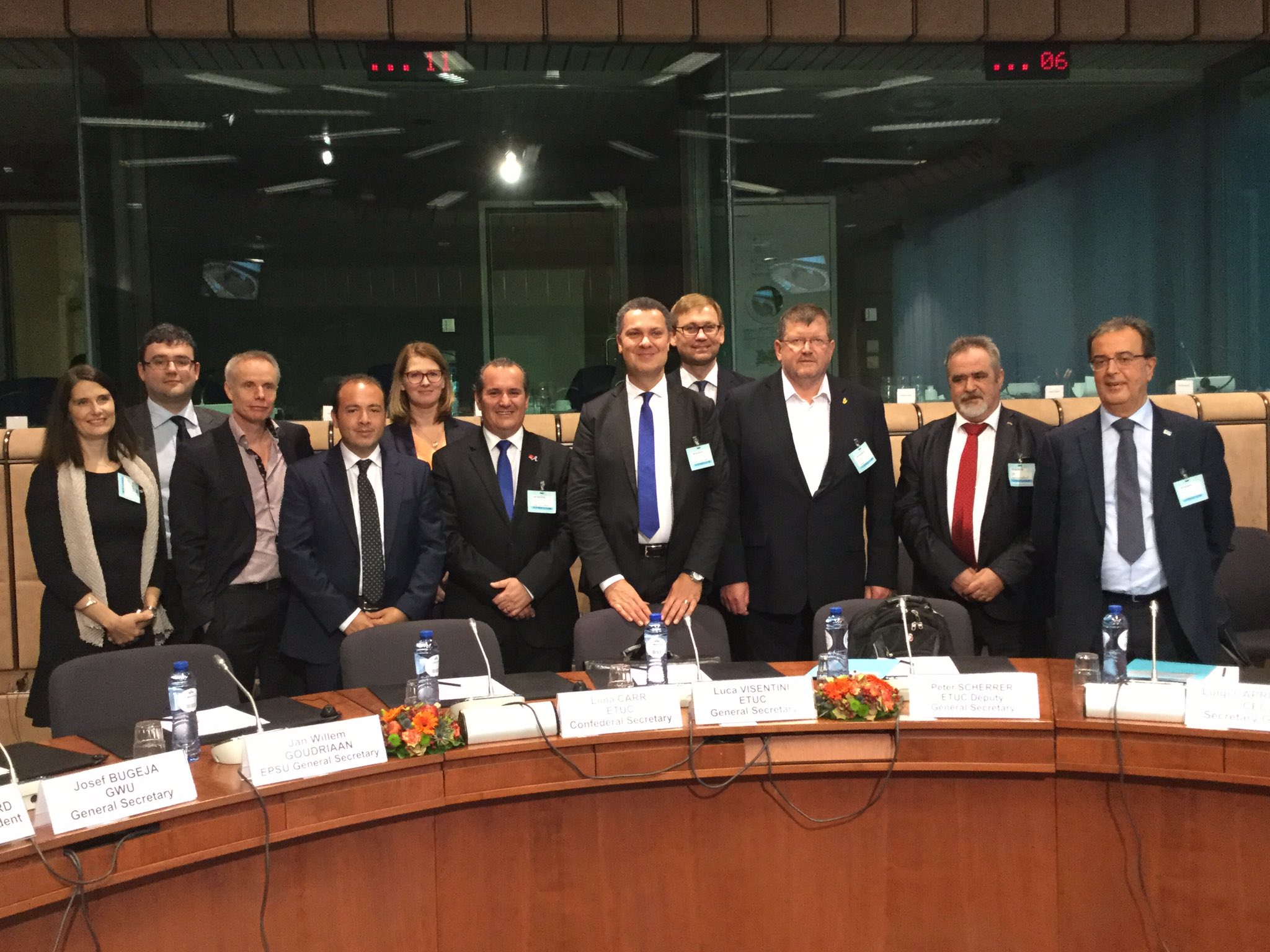 Europe is facing extraordinary circumstances, and needs ambitious replies to the needs and concerns of its citizens.

Social partners want to be on board for this discussion.

This was the main objective of the quadripartite declaration we signed few months ago – now it’s time to put it into practice, and the best way is to align our dialogue with what is going to be addressed by leaders tomorrow.

We are disappointed by the poor results achieved by Member States at the Bratislava summit.

We appreciate that a road map is now in place, and that it will end up in a white paper to be discussed in Rome on 25 March.

We would like to know how you will involve us in this process – no results can be achieved without listening to the organisations representing economy and labour market.

Also on Brexit, we would like social partners to be involved in the negotiations.

In our joint statement delivered today, we are in favour of the UK keeping access to the single market, but with full respect of the four freedoms, particularly freedom of movement for workers.

And trade unions would like in particular to make sure that the social dimension, and the European Pillar of Social Rights, are included in the white paper and in the roadmap launched in Bratislava.

The social emergency in Europe is the main reason for discontent and distrust of citizens.

If we don’ address this, we won’t be able to defeat anti-European attitudes.

The EU in recent years has reacted to the global crisis by focusing on budget constraints and exports – but it has not resolved any of the problems of our economy – instead it generated poor recovery, stagnation and deflation, unacceptable levels of unemployment and precariousness.

Can we all together recognise that we need to rebalance this approach and that a change is needed?

To achieve this, urgent measures are needed.

First of all, an extraordinary plan for investment.

Public investment should be reinforced, as the only effective way to trigger private investment too.

Your Investment Plan, dear Jean-Claude – especially now that the second phase has been announced – has to be redirected towards the countries and sectors most in need, and the amount of available public resources has to be significantly increased.

Most Member States cannot invest, because of the Stability and Growth Pact – so we think it has to be reformed, by introducing a stable and transparent ‘golden rule’ for flexibility, excluding from deficit and debt targets productive and progressive investment.

We need a fair and transparent basis for all governments to boost sustainable growth.

I listened very carefully to what you said in the EESC Jean-Claude, and I agreed on almost everything – except one point, when you said that it’s not up to the EU to invest.

You can invest, if you want – you can support transnational projects, as you did in the past.

These projects can be financed by the European Investment Bank, which has already the mandate to issue bonds in the markets.

Additionally, the current revision of the Multiannual Financial Framework should be exploited to set up a real autonomous EU budget and even an EMU Treasury.

I remember that when you were President of the Euro Group, you were a supporter of Eurobonds – and we highly appreciate your efforts to trigger a sound investment policy.

We also recognise the huge difficulties that you, and Donald too, face in the Council – but be sure that if you will continue being ambitious, we will be on your side.

The European economy is based for more than two thirds on internal demand – without relaunching consumption we cannot recover.

The only way to do it is to increase purchasing power of people via a pay rise.

Real wages have been lagging behind productivity for years in all European countries – we have an enormous gap to be filled.

Increasing wages benefits the economy, supports productivity, and doesn’t harm employment –if it is based on capacity of social partners to deliver proper industrial relations.

Collective bargaining is a win-win solution for competitiveness, and social partners need to be helped in delivering it – via recommendations, funding, but in some cases also national legal frameworks.

In Eastern countries I’ve heard several institutional representatives stating that they are fed up being low wage and cheap labour countries.

They have opposed the revision of Posting because they wanted to keep their competitive advantage – but maybe also because they don’t agree in seeing equal treatment being applied in the West only.

What about workers in Volkswagen plants in Slovakia, performing 85% of German productivity, but earning 25% of the German salary?

Can we accept these levels of inequality and unfair competition?

This is the reason why, beside a pay rise in line with productivity, we also want to launch a process for wage convergence – to be managed by social partners via collective bargaining, and to be supported by public authorities at EU and national level.

This should be the method to be followed for the Social Pillar.

Recommendations in the framework of the Semester, compulsory funding for capacity building, legal frameworks and legislative processes, where needed – these should be the tools in the Commission proposal.

The European Pillar of Social Rights is a great initiative.

And we want to make sure it is not a paper exercise, it becomes a set of concrete proposals that make a difference in improving working and living conditions.

This is the only way to make people believe again in Europe as an advantage, not as an enemy.

Efficient unemployment benefits, minimum income systems, better standards for pensions, sound social protection – also for precarious and non-standard workers, youth and skills guarantees, fair mobility, portability of rights – these are the things that can talk to people, tackle their fear and anger, and prevent citizens from looking for a scapegoat.

The Social Pillar is an opportunity to reinforce and reform the European Social Model –not an obstacle to competitiveness and economic growth.

Countries with high wages, strong social dialogue and collective bargaining, sound social protection systems, are the ones that perform better in the economy.

It is time to rebalance economic governance with social governance, the European Semester with a Social Semester – we have to come back to the ‘social market economy’ that Jacques Delors put at the core of the single market.

To do that, we need two preconditions.

First, that the Social Pillar becomes part of the Bratislava roadmap – and for this we ask you to come with your proposals in time for the summit in Rome.

And second, that sound social dialogue, industrial relations and workers’ participation are implemented.

I come back to our quadripartite declaration to reaffirm that we want to make it work.

We are taking responsibility to implement our work programme, to develop our joint projects, to boost capacity building of our members – and, although with some difficulties, to achieve bilateral agreements.

But we need support and a consistent approach from all of you.

We ask Member States to help social partners to develop well-functioning social dialogue and industrial relations – we ask the European institutions not to frustrate our efforts – and we ask employers to go further in engaging in negotiation.

Let me remind you that the hairdressing social partners still wait for your commitment to move forward on the implementation of their revised agreement.

Citizens deserve a Europe that protects – you said, Jean Claude, in your speech in the Parliament.

This is exactly the Europe we want.

A Europe that is able to put in place a series of policies which can make it stronger in the global arena.

But also a European Union that can convince member states and citizens to take their own responsibility, and to come back to their values of peace, solidarity, respect for fundamental rights.

We cannot accept that Europe is addressing the drama of refugees simply from the angle of security and border control – neglecting the duty of saving lives, welcoming and relocating people in need, integrating them in the society and labour market.

I just came back from a trade union mission to Turkey last week.

We cannot accept that Europe keeps its commitments with an almost-dictator, closing its eyes to regular violations of rights.

We think that more than 6 billion euros should be used to integrate refugees in Europe and cooperate with origin countries.

Please at least look at what is happening in Turkey now – 106.000 workers dismissed or suspended from the public administration, including teachers, doctors, journalists, judges and persecutors – with no hope to find another job even in the private sector.

This is about violation of human, democratic and workers’ rights – I appeal to you not to ignore it.

We trust you to make things change – and we are on your side to build together a better Europe for people.

20.10.2016
Speech
In Economic governance, Migration, Turkey
We need to invest in material and immaterial infrastructures, just transition towards green and digital economy, innovation and research, education and training, social infrastructures and public services.
It is time to rebalance economic governance with social governance, the European Semester with a Social Semester – we have to come back to the ‘social market economy’ that Jacques Delors put at the core of the single market.
Print