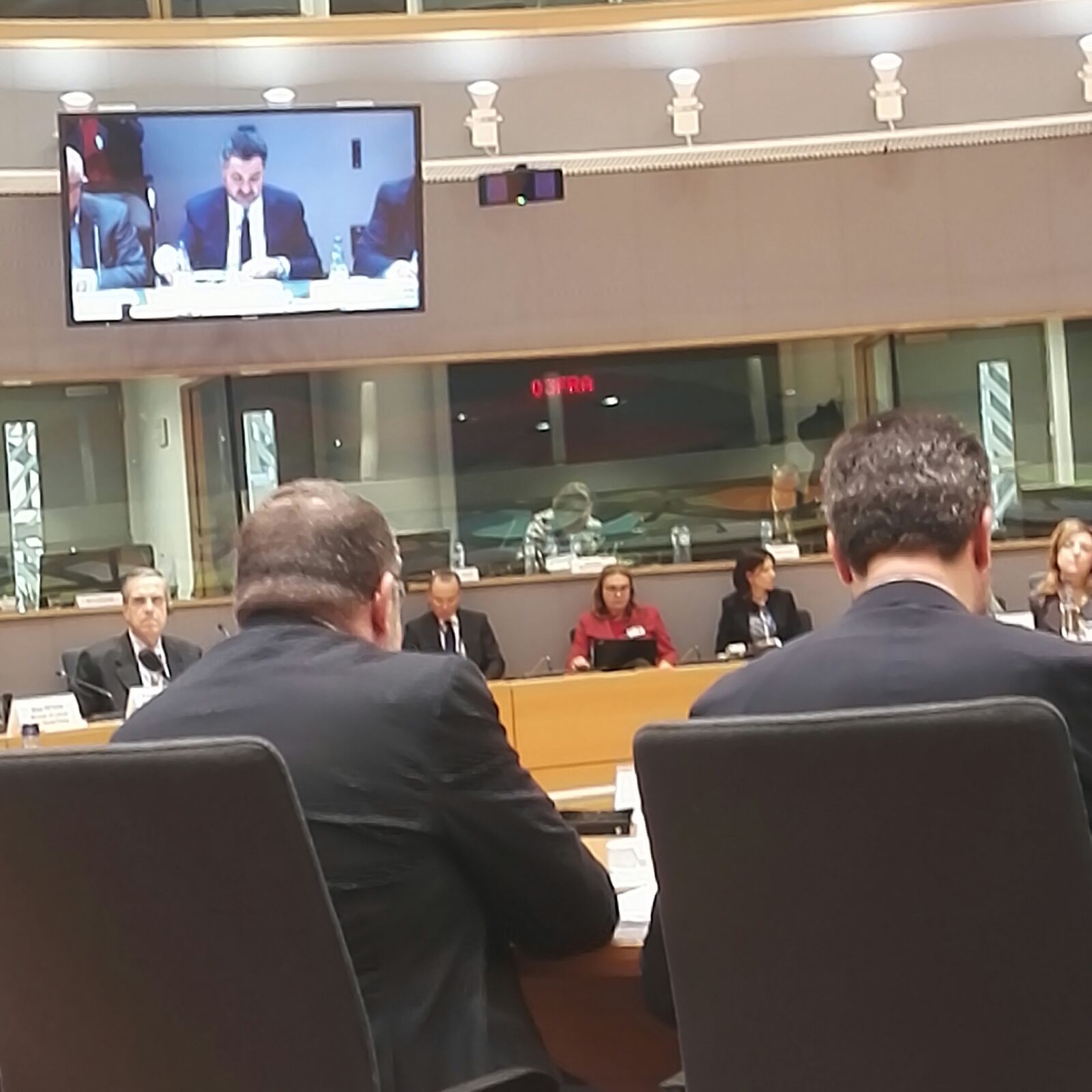 We acknowledge that the economic situation and employment rates in Europe are improving.

But we also see that unemployment is still too high, most of the new jobs created are precarious and poorly protected, and social exclusion and inequalities in the labour market and society are damaging people’s trust and feeding populism and anti-European sentiments.

Recent election results have been revealing in this respect, although we welcome the deal in Germany and the renewed Franco-German cooperation.

We insist again on the need to stop austerity, to boost public and private investment to create the high-quality jobs Europe needs, to support a significant increase in internal demand through pay rises and upward wage convergence, and to address inequalities and social exclusion through an ambitious and effective implementation of the European Pillar of Social Rights.

We have appreciated the change in the EU policy approach, shown in the last Annual Growth Survey and Joint Employment Report, together with the recently published country reports, recognising the need for more progressive macroeconomic policies, including support for investment in people and wages growing in line with inflation and productivity.

Now it’s time to turn this new narrative into reality, by including these elements in the Country Specific Recommendations to come in May and making sure that the Social Scoreboard which accompanies the Social Pillar becomes a basis for a more social European Semester.

To achieve this, Labour Ministers' voices should be more listened to by Finance Ministers, and economic and social policies should go hand in hand, instead of remaining separate or even in conflict with one another.

The role that social partners can play in this context is very important, but we need the Commission and Member States to make stronger efforts to improve our involvement in the Semester, particularly at national level.

The EMU Package is not unconnected: a better functioning EMU is essential to improve economic growth together with social cohesion.

The ETUC has welcome the measures proposed by the Commission in the Package, and we encourage the Council not to block it, but instead to implement it rapidly and substantially.

A European Monetary Fund and an EU Finance Minister have a great symbolic value, but even more important are the tools that would allow Europe to cope with asymmetric shocks and to protect and incentivise investments, particularly public ones.

Limiting the EMU reforms to the Banking Union only, would again give citizens the wrong message that banks count more than people.

Europe needs a plan for our economy and labour market, that allows us to deal with the challenges of Industry 4.0, digitalisation and automation, climate change and moving to a low carbon economy, globalisation and free but sustainable trade.

Coherent policies have to be put in place, particularly for the industrial and energy sectors – our production and jobs must be protected from dumping, while respecting the rules of an open economy and global competition.

Workers affected by these changes must be supported in adapting their skills or finding new and high-quality jobs opportunities – investment in lifelong learning and communities at risk is essential to ensure that nobody will be left behind.

We reiterate our demands for a European Industry Policy, and for the European Globalisation and Adjustment Fund to be transformed into a European Transition Fund – by broadening its scope, making it less bureaucratic and more easily accessible, changing its role to manage the restructuring process, instead of intervening with a purely compensatory approach after the damage is done.

An in-depth reform of the EGF is linked to the forthcoming discussion on the new Multiannual Financial Framework.

We don’t want to enter into the very political discussion about the size of the EU Budget after Brexit, although we endorse the Commission’s proposal of a 1.1x % of GNI budget, with the future EMU budget lines possibly coming on top.

What is even more important for us is:

We would like to draw your attention to the joint position the social partners have delivered on some of these issues today.

The MFF and the EU Budget, the Semester, and more generally a progressive and well-coordinated EU/EMU economic policy are the fundamental elements for the implementation of the Social Pillar.

We much appreciated the commitment national leaders made in Gothenburg, in proclaiming the Pillar as the foundation for restoring the social dimension of the EU, the ‘Triple-A’ social Europe announced by President Juncker.

Now it’s really time to deliver concrete results for EU citizens and workers, and I would like to warmly thank the Commission, particularly Jean-Claude, Marianne and Valdis, together with all your teams, for the great work you have done in transposing the principles of the Pillar into legislative and non-legislative initiatives, to be finalised before the end of your mandate.

We urge all actors in this room, including ourselves as social partners, to make every effort to achieve this goal.

The revision of the Posting of Workers Directive was positively agreed in Trilogue two days ago, and now it has to be approved by the EPSCO in June, to avoid problematic bottlenecks by maintaining the compromise already reached and thereby accelerating the lex specialis on road transport.

We are at your disposal to help to find reasonable and balanced solutions on the Work-Life Balance and the Transparent and Predictable Working Condition Directives. We expect to achieve the adoption of these two Directives before the European elections, bearing in mind that working people wouldn’t accept any further breakdown of initiatives which are so important to achieving greater equality and protection in the labour market.

In particular, the Working Conditions Directive and the Recommendation on Social Protection are closely linked, if our objective is to cover so-called labour market outsiders: precarious workers, platform workers, freelancers, self-employed.

These groups, although each with its own specific conditions, deserve the same level of rights and protection as other workers, including in terms of pensions and equal remuneration. To achieve all this, some changes are needed in the proposals, notably when it comes to the definition of worker.

Finally, we welcome the idea of establishing a European Labour Authority, and we urge the Commission and Member States to be ambitious in defining its scope and architecture.

We need an authority which makes a difference in tackling abuses and frauds, in solving disputes and establishing a level playing field in the context of free movement. While we acknowledge that the Authority´s spending has to be kept as little as possible, this should not jeopardise the fact that European and national social partners must be fully involved in its governance.

My last words are on social dialogue.

We regret the Commission’s decision not to bring to Council for legislation the recent social partners' sectoral agreements. We appreciate there are negotiations going on for a possible Action Plan for hairdressers and we hope for a positive outcome.

For the agreement on central government administrations, we do not see any solution at the current stage and we are very concerned about it. We invite all parties involved to take further steps to resolve the situation and ensure that workers in the public sector enjoy the right to information and consultation, just like workers in the private sector.

At cross-sectoral level, we recognise the efforts the Commission has put into relaunching the European social dialogue.

I would like to particularly welcome the adoption of the European Quality Framework for Apprenticeship by the EPSCO, which we hope will be confirmed by the Council tomorrow. We are also happy that we managed to agree on a European partnership for integration of refugees in the labour market, and we are fully committed to supporting the shared principles and actions.

Unfortunately, we see that very little has been done to follow up to the Quadripartite Declaration for the relaunch of social dialogue we signed two years ago.

Of Member States, because the level and quality of social dialogue at national level is still too poor: we need more in terms of tripartite dialogue on reforms, of involvement in the Semester, of capacity building of national social partners and support for collective bargaining and industrial relations.

Our responsibility as European social partners is to negotiate a concrete and ambitious work programme, starting from some of the points I’ve mentioned, like the Semester, the MFF, Industry Policy, Digitalisation and transition management.

And talking about possible cooperation, I must conclude with wages.

I won’t repeat all our arguments backing the necessity of a discussion on wages: the need to increase salaries to boost demand and growth, to catch up with advances in productivity, to reduce inequalities, close the gender pay gap and improve inclusion in the labour market.

What I want to ask all of you around this table today - Commission, Member States, employers - is to be open to dialogue on this theme, and to start a frank discussion on the issue of the wage gap in the EU Single Market.

And I want to invite all of you to a conference the ETUC is organising on 26th June in Sofia, the day before the Bulgarian Presidency initiative on the Social Pillar.

Our conference will be the opportunity for social partners, multinational enterprises, Commission and governments to address the issue of wage convergence.

I hope you will accept our invitation.

Thank you very much.

21.03.2018
Speech
In European Semester, European pillar of social rights
We insist again on the need to stop austerity, to boost public and private investment to create the high-quality jobs Europe needs, to support a significant increase in internal demand through pay rises and upward wage convergence, and to address inequalities and social exclusion through an ambitious and effective implementation of the European Pillar of Social Rights.
Print