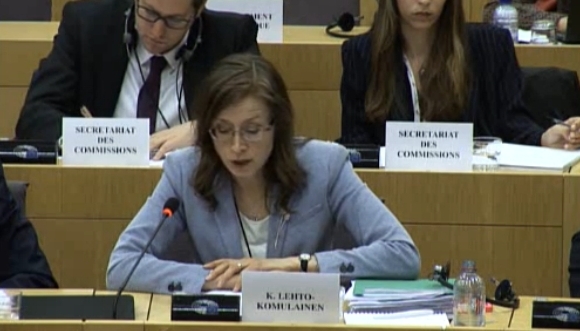 Mr. Chairperson, Members of the Committee, Ladies and Gentlemen,

I represent trade union members. They pay their taxes. They have witnessed cuts in public expenditure and cuts in salaries. They continue to pay their taxes. It is fair that they can also see multinational companies paying their due taxes. This a matter of coherence and fairness in society. The ETUC expects the EU to deliver tangible results to tackle tax avoidance and fiscal dumping/fiscal shopping. This is the way to regain the trust between people and the EU.

I have three main points: 1) our general support for the CCCTB; 2) our amendments to the CCCTB and 3) our demand on the common corporate tax rate.

POINT ONE: THE ETUC´S GENERAL SUPPORT

Our trade union members are interested in figures that show how big is the amount of lost taxes.

We demand three major amendments: two of them concern the scope of the directive: Firstly, concerning the threshold and secondly, concerning the geographical scope. Our third amendment concern a fast implementation of the CCCTB. Let me go through them:

According to the proposed directive, once the CCTB is implemented, which is scheduled to the end of the next year, the CCCTB should be implemented. Remarkably, there is no timetable provided.

We underline that only with the CCCTB would the use of transfer mispricing on intra-group purchasing within the EU be eliminated. (N.B. Tax avoidance through accounting codes arbitrage i.e. picking the national accounting code which allows the highest profit maximisation would still be possible even in the case of CCCTB being in force if there will not be EU standardisation on this matter– and Professor Murphy has raised this issue well. But profit shifting through transfer mispricing would be tackled by the CCCTB.) Its extension to third-party States is therefore legitimate.

To fight against tax avoidance and fiscal shopping effectively, we therefore demand a rapid implementation of the CCCTB.

The European Union and its citizens deserve a common, consolidated and non-avoidable corporate tax base and a common corporate tax rate. It is a matter of coherence and fairness. It is my pleasure to thank Professor Murphy for his valuable research on this subject-matter[1].

[1] Just let me refer to two pieces of research calling for such standardisation:

04.05.2017
Speech
In Financial Market / Regulation/ Taxation
I represent trade union members. Theypay their taxes. They have witnessed cuts in public expenditure and cuts in salaries. They continue to pay their taxes. It is fair that they can also see multinational companies paying their due taxes. This a matter of coherence and fairness in society.
Print