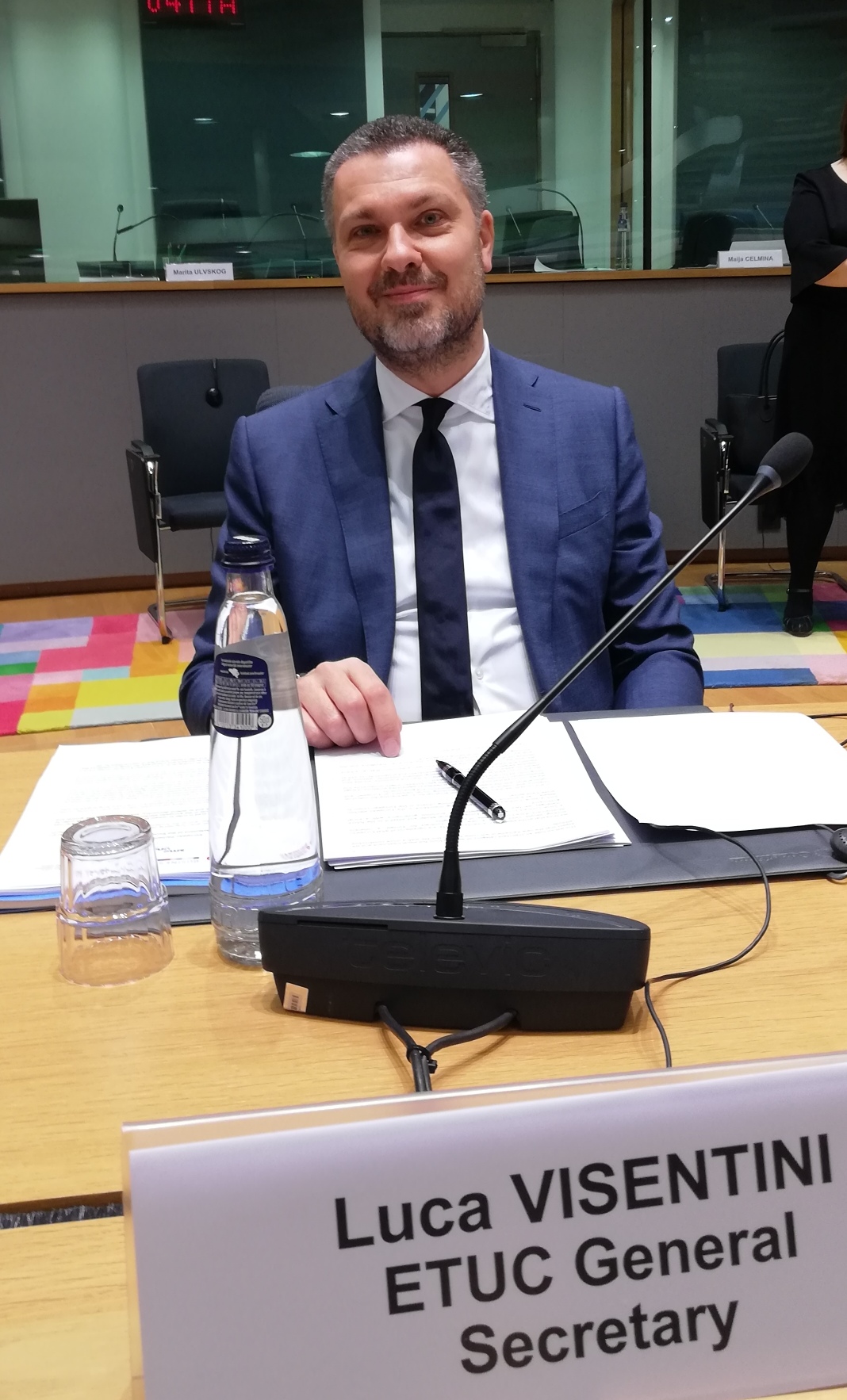 This Tripartite Social Summit takes place two months before the European elections, and we all bear the responsibility to launch a positive message to European citizens, workers and businesses:

The message that it’s worth going to vote to defend democracy in Europe and reaffirm European values – that the European Union is able to deliver concrete results, which can make a positive difference to people’s lives.

This has not always been the case over recent years – the effects of the crisis, the still high levels of unemployment, inequality, poverty and social exclusion, have seriously weakened citizens’ trust in the European project.

To convince them not to vote for anti-European, far-right, nationalistic parties, we need to show that we can relaunch and strengthen the European Project, making the Europe that protects a reality for people.

The European social partners have delivered a very powerful message on this, with our joint statement for the European elections, which we have circulated to all of you and we have published yesterday

We have also asked Prime Minister Dăncilă, and Presidents Tusk and Juncker, to invite the European social partners to a consultation at the European summit in Sibiu.

Previous experiences, like in Rome and Gothenburg, have shown that social partners can bring a very effective and positive contribution to proposals for the future of Europe.

We therefore ask you to positively consider our request.

Being two months before the European elections, also gives to this TSS the task of making an assessment of what has been delivered during the current European Parliament’s and Commission’s term, and what is still to be finalised in the economic and social areas.

We are very worried not to see any real step forward in the EMU reforms, especially when it comes to the measures for protection of investment and for support to social-friendly reforms, including tools to tackle the impact of macroeconomic shocks on employment.

This is even more critical, if the end of quantitative easing by the ECB is accompanied by a tightening of fiscal requirements for member states and no further flexibility is considered for making the Stability and Growth Pact more fit for purpose.

All the efforts put in place by the Commission to boost investment over the last three years risk being frustrated, if Member States keep postponing those important decisions.

I urge you – avoid making the Sibiu summit a lost opportunity.

We ask you to be ambitious, including on the European budget and Multiannual Financial Framework.

We understand it will not be approved before the elections – but I would like to reaffirm our demands:

Last but not least, the involvement of social partners in each stage of the MFF cycle must be preserved – together with funding for capacity building at national level.

The role that social partners can play, through bipartite and tripartite social dialogue and collective bargaining, is essential at European, national and sectoral levels.

As you know, the European social partners have agreed on their new work programme for social dialogue 2019-2021.

It focuses on very important issues, such as digitalisation, improving the performance of labour markets and social systems, skills, psycho-social risks at work, and circular economy.

In particular social partners will negotiate an agreement on digitalisation, which can have relevant consequences on EU and national legislation and practices.

We ask you to help social partners to implement our work programme – the Commission does a lot in terms of financial support and involvement, but national social dialogue and social partners participation in the Semester process is still absolutely insufficient in many Member States.

Here it comes your responsibility to create a positive environment and conditions for social dialogue to reach its potential.

The MFF, the Semester and social dialogue are, together with legislation, essential tools for the implementation of the European Pillar of Social Rights.

Huge work has been done at European level since the proclamation of the Pillar – many important relevant legislative tools have been delivered.

we are particularly satisfied with the revision of the Posting of Workers Directive, the Work-life Balance Directive, the establishment of the European Labour Authority, the Recommendation on Access to Social Protection, the new legislative framework on carcinogenic substances at work.

And we welcome the agreement reached in Trilogue yesterday on the revision of Regulation 883 on coordination of social security.

Although compromises always leave all negotiating parties dissatisfied about something, this deal was desperately needed to complete the legal framework for fair mobility of labour in Europe.

I would really like to thank the European Commission, the Parliament and the Romanian Presidency for the efforts put in place to deliver many of these initiatives before the European elections.

Efforts are still needed to make sure that information, consultation and workers’ participation rights are fully respected in the Company Law package and the Insolvency Framework Directive – to avoid another missed opportunity to introduce more democracy at work.

And attention needs to be given to the transposition of the Whistleblowing Directive, in particular to ensure that workers blowing the whistle have the right to be properly represented by their trade union in the internal procedure.

Finally, we regret that there is no chance to finalise the extension of the revision of the Posting of Workers Directive to road transport workers, since the Mobility Package is still stuck in the European Parliament.

This will exclude an important category of workers from full equal treatment and we expect that the new Parliament will come back to this file with a more constructive attitude.

We think that all the elements I’ve mentioned so far are ingredients of what European working people need most: a new Social Contract for Europe, a coherent development of the European Pillar of Social Rights.

A Social Contract to restore our European Social Model and adapt it to the future challenges we face, while completing the economic governance with a social governance.

Such a Social Contract is getting increasing importance in the European election debate – as a promise to rebuild trust among citizens in the European Union to protect and deliver.

In this context, we want to reiterate our proposal for a “partnership for industrial relations and collective bargaining”, involving social partners at European and national level, with the support of the Commission and governments.

We are convinced that such a partnership is needed to address the problems of wage developments in Europe, and particularly the gaps between wages, productivity and living costs, particularly between East and West.

We are convinced that social partners together, in their full autonomy, are the best placed to address these issues, by developing efficient industrial relations and collective bargaining, which can foster competitiveness and productivity, as well as equality and redistribution.

We reiterate our proposal to the employers to open a discussion that can achieve positive results in the common interest.

And we count on the European institutions, the Romanian Presidency and the incoming ones, to help social partners to deliver it.

20.03.2019
Speech
In Economic governance
This Tripartite Social Summit takes place two months before the European elections, and we all bear the responsibility to launch a positive message to European citizens, workers and businesses: the message that it’s worth going to vote to defend democracy in Europe and reaffirm European values – that the European Union is able to deliver concrete results, which can make a positive difference to people’s lives.
Print