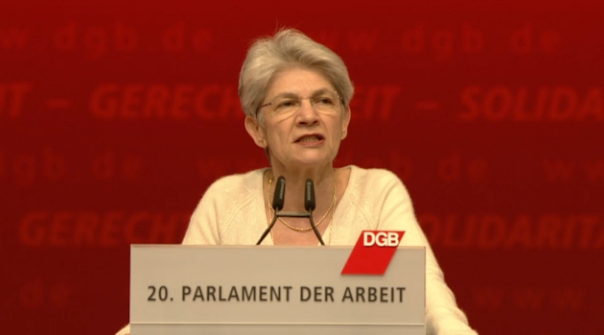 I would first like to congratulate you on electing Reiner Hoffmann as Chairman of the German Trade Union Confederation.

There was no applause in Brussels or elsewhere in Europe when Reiner left Brussels. But we quickly realised that he was not gone for good and that we had not lost him. And now he is back again and, as a Member of the Executive Committee of the ETUC, he will be making life difficult for myself and the Secretariat.

Dear Reiner, I wish you the very best of luck. We are looking forward to working with you and the DGB.

The events in Ukraine and the war in the former Yugoslavia should remind us of the fact that the Europe we have now is the result of two horrific wars, blind nationalism and barbarous fascism and totalitarianism.

Europe is more than just the European Union. We need peace and cooperation throughout the whole of Europe.

Send the tanks back to their bases.

Sit down at the negotiating table.

Borders in the European Union are not lines of demarcation. They are open borders. This has now become part of daily life in Europe and something we are accustomed to. As is the case with many other things that Europe has given us.

However, the European Union is being increasingly viewed as an institutional construct, which is becoming increasingly alienated from European citizens. Europe needs a wake-up call, new impetus and different policies.

So, what needs to be done?

Democracy, work and solidarity – these are part of the foundations of Europe.

The drastic cure of neo-liberalism and the battle cry of “austerity” will not heal the patient, but instead make him even sicker than he already is.

The situation in the countries hit by the crisis has got even worse.

Unemployment is on the rise.

Social welfare systems are being undermined.

Increasing numbers of people have no, or only limited, access to health care.

Increasing numbers of young people are leaving the school benches and going directly to park benches.

Twenty six million people are unemployed. That’s is ten million more than in 2008.

If unemployment were a State, it would be the seventh biggest Member State in the European Union.

We are not taking the easy way out. We are not saying that public debt is a virtue.

We are saying that Europe’s future depends on investment to create more growth.

Investment in infrastructure, research and development.

In education and training, in high-tech and in the environment.

This will provide jobs and stability. This will put the European social model back on track.

Both the ETUC and the DGB have put forward proposals in this area.

For instance, the introduction of a financial transaction tax.

That would improve public finances.

It would be good for social justice.

It would be bad for financial speculation.

And that, ladies and gentlemen, is the way it should be.

It proposes something that ten Eurozone governments are considering introducing, i.e. a stock exchange transfer tax. But not a financial transaction tax. So there is room for improvement there.

Trade unions are not being populist when we say that the cost of the crisis is being borne by those who did not cause it.

The System, which strangely enough is called the finance industry, is still to this day earning money from the crisis.

We need to kick-start our industrial policy in Europe – rather than kick-start the so-called finance industry once more.

On 25 April, at its last meeting before the elections, the Economic and Monetary Affairs Committee of the European Parliament presented a report on tax fraud, tax evasion and tax havens. This report provides a good foundation for a realignment of European policies.

The next European Parliament elections will take place on 25 May.

Europe’s claim to be a democracy must be measured against the yardstick of the competences that are granted to the Parliament.

That includes who is to be the next President of the European Commission. Europe’s citizens must make that choice in the elections.

Rather than the Heads of State and Government doing so behind closed doors.

Progress has been made. Parliament has grown in confidence.

But there is still plenty of room for more.

We want a Europe of Citizens.

That is more – much more - than a Europe of Governments.

We want a European Civil Society.

This includes not least a strong and integrated European Trade Union movement.

This cannot be conjured up overnight. It takes time.

However, we must make sure that we do not let the clock run down.

Europe must come out of the bunker in which Heads of Government and Ministers all too often make their decisions.

The only way to achieve this is by further strengthening the European Parliament.

The negotiations on a transatlantic free trade agreement need to be in the public domain and subject to parliamentary scrutiny.

Issues such as European social standards, labour rights and intellectual property rights are not negotiable.

And, as a Frenchwoman, allow me to say the following:  if it says Camembert on the label – it must be Camembert inside the package.

Recent election results and trends in some Member States are alarming.

More and more people are embracing ideologies of the past.

These ideologies strive to turn back the wheels of time and break Europe up into its individual national components.

Opinion is being stirred up on the back of deceitful xenophobia and even racism.

The Front National is calling for France to give up the Euro.

The United Kingdom Independence Party wants the UK to leave the European Union.

And – unsurprisingly – Mr Berlusconi’s business model is based on ‘German bashing’.

His most recent gaffe, where he alleged that Germans denied the existence of concentration camps, is shameful.

This was said by someone who has on his list of candidates for the European elections a certain Alessandra Mussolini, who takes a great deal after her Grandfather.

And who said: ‘I’d rather be a fascist than a queer’.

I ask the European People’s Party: how much longer are you going to put up with this in your ranks?

After my welcoming speech, there will be a round table discussion on the issue of European Works Councils.

That adds to the quality of your Congress and sends out a clear signal.

There are currently around 1,000 works councils and around 20,000 people sitting on works council across the European Union.

The information and consultation rights of workers are extremely important.

They contribute to economic democracy.

This comes in the form of direct and tangible social dialogue.

This is the nuts and bolts of trade union activity in Europe.

The 2011 ETUC Congress in Athens gave us the task of focusing on the issue of the ‘Europeanisation of co-determination’.

Co-determination, ladies and gentlemen, was a controversial topic for many years within the European Trade Union movement.

Its critics mistakenly thought it amounted to collaborating with management.

That it was a breach of the ‘pure model’.

This view has significantly changed over the years.

It is clear that a carbon-copy transposition of one model across the whole of Europe is not possible.

What is also unacceptable, however, is to use Europe to dismantle a model that has proved its social worth over the years, as is the case with the German co-determination model.

A Reflection Group that we set up submitted a discussion paper at the end of April, in which the following topics are addressed:

However, this is not yet a done deal.

This proposal still needs to be discussed at length in the competent committee.

The Execute Committee will then take a final decision on the matter.

Since the Grand Coalition came into government, some steps in the right direction have been taken.

The forthcoming introduction of a nationwide minimum wage,

– these are also victories for the DGB and its affiliates.

This is important not just for Germany, but for Europe too.

We now hope that the government will relax its position on the configuration of the EU’s anti-crisis policy.

A policy that is beholden to austerity will lead to Europe’s ruin.

What we do not need is a further dismantling of the welfare state.

Cohesion and solidarity – these are basic trade union principles.

Determination and the ability to act.

To achieve this, we need a strong and committed DGB.

Thank you for putting up with my French accent without complaining. This shows that you are good Europeans.

15.05.2014
Speech
In Precarious Work, Economic and Social crisis, Employment, Social protection
The next European Parliament elections will take place on 25 May. Europe’s claim to be a democracy must be measured against the yardstick of the competences that are granted to the Parliament. That includes who is to be the next President of the European Commission. Europe’s citizens must make that choice in the elections.
Rather than the Heads of State and Government doing so behind closed doors.
Print