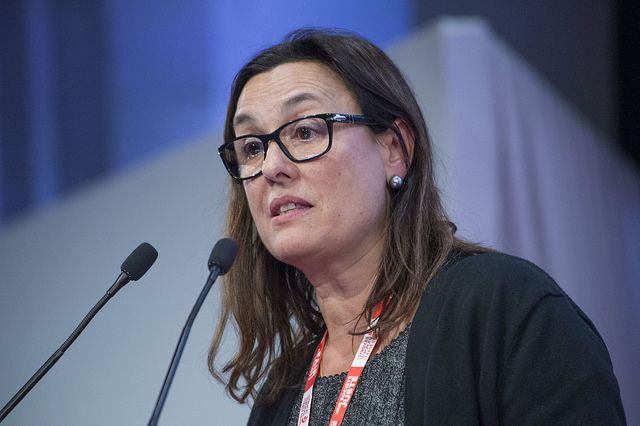 First of all, thank you for inviting the ETUC to your conference, and for inviting me as a new confederal secretary.

Congratulations to Therese and Vivian, the conference chairs.

I think is a good idea to pay tribute to all the Irish women who have dedicated their lives to fighting for equal opportunities, and for better lives for future generations. We need to continue this work.

I promised to say: ‘I am Esther Lynch’s colleague; we work together in Brussels’. She is a strong woman, full of brilliant ideas, and I am happy to be close to an important person for your union and for your conference. I will go back home with your good wishes and embraces.

It is the first time that a Spanish trade unionist has been elected as an ETUC confederal secretary, and I think it is the first time for Ireland too. We are a new team, and for that reason we bring fresh ideas, but we also need time to gain more experience.

Europe is facing a complicated situation, and women are suffering double punishment because of the crisis and the impact of austerity policies, and because of gender discrimination.

Yesterday I was informed about the situation of the 999 Irish company teleworkers who are payed below the minimum wage and suffer harassment at work. A big majority of the workers are women. This is unacceptable, and the trade union movement condemns these bad working practices, and is campaigning against them.

The social cuts and the reduction in social investments, as well as in gender and equal opportunities policies, have produced a step backwards in different European countries.  In all parts of the island of Ireland, as in Spain, Greece, Portugal, Italy, and Eastern European countries. But I am convinced that the solutions are not national, the solution must be European. The geographical definition of North/South is now a moving concept, and there is a south in each city. In Finland, for example, they have industrial problems, and trade unions are organising strikes for the first time in years.

The ETUC is the voice of all European unions, and works to ensure that the voices of all women in the EU are heard and listened too. With this objective, we have urged the European Commissioner responsible for gender, Vera Jurova, to draw up a new European Strategy for Gender Equality. We have the support of the ETUC affiliates, and the majority of EU governments have sent letters to the Commission calling for a new strategy. I have sent an open letter demanding: “why is the Commission alienating half of the population?”

Let us see what happens. We will continue to pursue this demand as an essential part of our own strategy.

The EU has a clear duty to act for gender equality. Art.2 of the Lisbon Treaty says that the European Union shall promote equality between women and men.

The ETUC is pursuing gender equality externally, by lobbing the EU institutions and negotiating with the employers (when possible); and internally, by strengthening gender equality within trade unions. The Paris 2015 Congress resolution give us the mandate to propose a statutory amendment to be discussed during the next mid-term conference, aimed at improving the gender balance in the ETUC.

HOW will we do this? By integrating gender mainstreaming into all ETUC policies.

We also have the priorities from our work programme:

They will be updated in a new work programme this year, including new challenges.

Yesterday I was in Dublin at Eurofound. They are finishing a very interesting piece of research that will put numbers and figures on the cost of the gender employment gap. In Europe, 370 billion euros per year.

You can imagine what we lose in terms of growing the European economy, public investments, and investment in social protection.

The 8 March 2016 annual survey focuses on gender segregation in the labour market. It is necessary to continue using 8 March as an opportunity to challenge and monitor the evolution in different countries.

In your conference you will be dealing with motions regarding important tools to reduce social exclusion and inequality: parental leave, paid leave, and work-life balance - one of the key elements in our negotiations with the employers.

Colleagues we must be positive. Often trade unions are like Sisyphus, climbing the mountain every day, and then doing it again. But we must keep climbing.

04.03.2016
Speech
In Gender equality, Speeches
Women are suffering double punishment because of the crisis and the impact of austerity policies, and because of gender discrimination.
Print