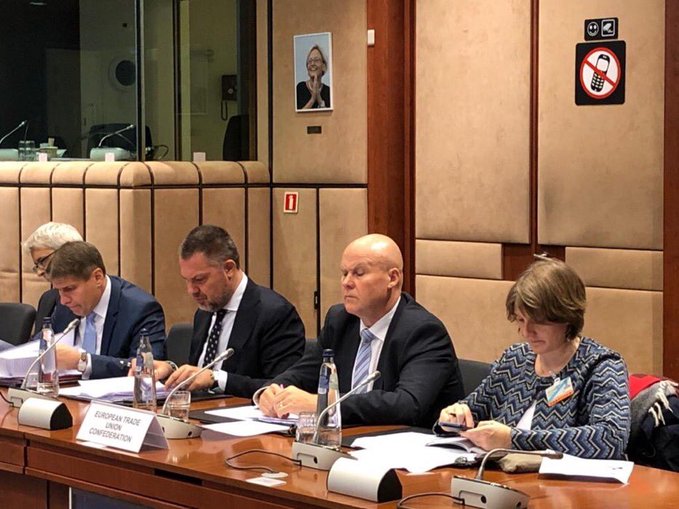 Colleagues from the social partners.

I do not like to be a pessimist, but the situation is grim.

The global and European economic forecasts have been revised downwards.

Inflation is still very low, despite all the efforts made by the ECB.

We had finally started to have some breathing space as we were recovering from the 2008/2012 crisis. Now the growth prospects are reported to be weaker than last year.

Also looking at the employment figures and claiming all is positive would be misleading.

Statistics show that there are more people in jobs than in 2008 and unemployment levels have decreased, but the reality is different, since the number of working hours in comparison to 2008 has not increased at all.

This means that the quality of work has deteriorated. Non-standard work has increased drastically and has overtaken standard work.  We see more people who are in part-time or temporary work against their will, their only alternative is unemployment.

At the same time, the level of real wages in Europe has gone down together with internal demand, while profits have continued to increase, creating high inequality in wealth distribution. Despite stagnating productivity, due to such a depression on wage dynamics, wages still lag behind productivity developments in many countries, particularly in the East. Such divergence is detrimental for the competitiveness of our economy and the cohesion of our societies, and this is one of the main causes of the success of populistic forces.

Net public and private investment levels as shares of GDP are still lower than they were in 2008.  At a time when we are borderline to a recession, we need to boost confidence.  It is, for this reason, we strongly recommend that public investment is not calculated in the country deficit.  Many Eurozone countries can, and need to, inject a fiscal stimulus; they have the capacity to do so.  This public investment needs to be channelled into the social space.

Indeed, public investment is needed to reskill the many workers who will be affected by the digital and ecological transformation.  Investment is also needed to create quality job offers in competitive and innovative sectors, so as to compensate for the job losses that will inevitably result from climate change, digitalisation and automation, globalisation and international trade. We need to make sure that nobody is left behind.

The ECOFIN Council is going to meet jointly with the EDUCATION Council tomorrow. It’s very good that Ministers discuss how to leverage on skills to accompany workers through the transitions. Therefore, improving the economic performances and delivering better working and living conditions for all.

But the Ministers should not make the mistake of thinking that continuous training will be enough, unless it is strictly connected with public and private investment, economic and social governance at all levels, and full involvement of social partners in managing these transitions.

Just transition shall go hand in hand with the urgent need to address the downward wage spiral and disparity in Europe.  Upward wage convergence is not only necessary to ensure that workers have quality jobs.  It is a stimulus to our internal market and one of the tools to reduce the spread of populism in Europe.

The ETUC welcomes the Commission's proposal to implement a European Unemployment Reinsurance.  This will be a good economic tool and a strong improvement in the governance of the Economic and Monetary Union. We need to implement this proposal soonest.

The ETUC also welcomes the announced legal initiative for minimum wages in Europe; a decent living wage is not a privilege but a must.  ETUC looks forward to being part of this discussion and reiterates that pay setting is first and foremost a matter of negotiation amongst the social partners.  Establishing or reinforcing well-functioning sectoral collective bargaining in every member state, is the best way to achieve a decent wage for all and upward wage convergence within and between countries.

I shall be very frank with you: the institutions sitting around this table made a mistake in the last decade by recommending cuts in wages and dismantling collective bargaining in Europe in an austerity environment. We welcome the fact that you started recognising it.  Now it’s time to be consistent with this new narrative and change the policy about pay and industrial relations, by giving back to social partners their power and prerogatives.

To achieve all this, ladies and gentlemen, we, the social partners need to be properly involved in the economic governance: this is the only way for us to bring our contribution to setting a more sustainable growth model. This is the reason why we have been insisting for years on the need to improve the format and effectiveness of the Macroeconomic dialogue. This has partially been achieved, but we can do more in terms of preparation and in-depth analysis.

We also need to link up the debate we have here twice a year with the discussion the Finance Ministers have in ECOFIN the Eurogroup and enter regular structural dialogue with the ECB governance bodies.   We had welcomed the invitation to the Informal ECOFIN we received from the Romanian Presidency, we also had some very useful technical meetings with ECB in the past.   But all this has not been repeated.

Finally, if any controversies on the economic assessment, not even on the policies to implement, should arise, it would be of utmost importance to organise ad-hoc technical meetings to be sure we share a common basis for discussion.

In conclusion, we would like all of you to create occasions for more structured dialogue between your institutions and the social partners, similarly to what we have with the European Commission.  Be sure we will always come to you with constructive ideas and proposals and that this will positively contribute to your decisions for shaping an economy that serves people.

08.11.2019
Speech
In Economic governance
Also looking at the employment figures and claiming all is positive would be misleading.
Statistics show that there are more people in jobs than in 2008 and unemployment levels have decreased, but the reality is different, since the number of working hours in comparison to 2008 has not increased at all. This means that the quality of work has deteriorated. Non-standard work has increased drastically and has overtaken standard work. We see more people who are in part-time or temporary work against their will, their only alternative is unemployment.