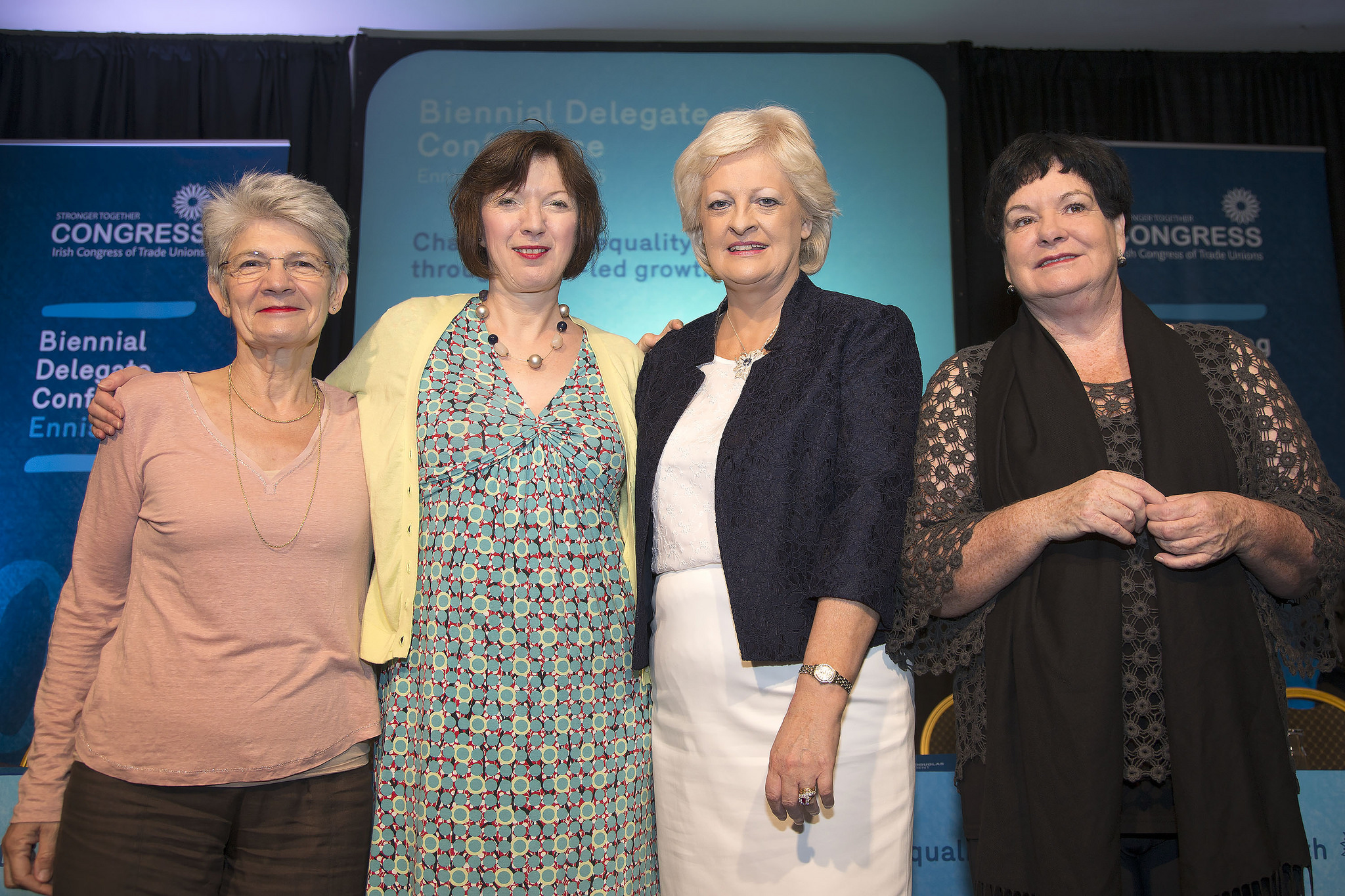 Speech given by Bernadette Ségol, General Secretary of the European Trade Union Confederation

I am honoured to address you once more – for the third and last time as ETUC General Secretary- at your Biennial Delegate Conference.

Over that turbulent period, Irish working people have borne the brunt of massive and unfair austerity policies.  But you have been strong.  You have been resilient.  The Irish trade union Movement has, as always, faced and moved forward.

I would wish today to repeat here the admiration for you of the whole European trade union Movement.

And you have been well led. I would like, again, to thank David Begg for his uncompromising pro-European stand, for his solidarity, as well as for his thoughtful contribution to our Executive Committee and the help he has given me personally.

The storms over Europe have of course not abated.

The last years and the last weeks have been a tragedy for the Greek people. Things have gone from bad to worse for them.  Their No in the referendum, means No, no more of unbearable austerity, enough, basta.

People in Greece and our trade union want to stay in.  We support them.  Politicians must recognise the failure of their policies and the damage it did to people.  A sensible solution must be fount which puts the interest of people first.

The ETUC always said that austerity was no solution for growth or for lowering the debt.  We proposed concrete solutions: our social compact; our New Path for Europe investment plan.

But the reality is that workers’ conditions are the only adjustment factor under current policy.  And the adjustment is through the low road.  The austerity misery path.

On top of the austerity agenda, we face the deregulation agenda which results from it.  We are told that “Better Regulation is the solution to our economic ills.

But instead of making EU legislation more effective, this ‘better regulation’ – known as REFIT - is erecting new barriers to proper legislative procedures.

Which brings me from REFIT to TTIP.

I must say that even after all these years I still have difficulties in navigating through the alphabetti spaghetti that constitutes Brussels-speak – and you don’t want to hear the French translation.

So, the Transatlantic Trade and Investment Partnership with the United States, about which I know you are particularly concerned.

This is not essentially a trade deal.

We would have few problems with it, if it were. The ETUC supports trade that is fair, creates decent jobs, and is integrated into active labour market policies that help reconvert to better jobs.

But much of the TTIP agenda is about standards. It’s about bringing European and American standards more closely aligned to facilitate trade.  We don’t mind the avoidance of duplication if that is the objective.  We don’t mind a common approach on where seat belts in cars should be anchored – though even on this I understand that there are differences because Americans usually come in larger sizes than do Europeans.

The fact is that regulations do not come out of thin air.  They have a purpose; to protect our citizens.

We are absolutely clear that European standards are not to be lowered but improved.  Decisions about setting them must be conducted through obscure democratic procedures, not committees of unelected regulators.  And regulation; standard-setting; must not be frozen or chilled in the kind of consultative arrangements that American companies are clamouring for. The kind of arrangements reminiscent of REFIT.

The ETUC has set its red lines:

·      First: Strong and enforceable labour standards including but not limited to the fundamental ILO conventions.  We think that health and safety for example should be included too.  We also want the text to make clear that the US should ratify the many conventions it has not – but that in any event they should all be fully implemented everywhere and for everyone in the United States. The Commission next week will be tabling its opening proposals during the tenth round of negotiations.  We have pressed our positions.  But, as we expect further proposals to be tabled later in respect of enforcement and the involvement of the social partners in monitoring – which are two key issues for us – we will have to come back to them during the course of the negotiations;

·      Second imperative: the guaranteed exclusion of our public services, in the wider sense, from market opening. That should be ensured through a positive list that leaves no ambiguity as to what is on the table; and

·      Third, no Investor-State Dispute Settlement mechanism. The beleaguered ISDS: “an affront to democracy” as your General Secretary succinctly put it the other day, that gives foreign investors special privileges to sue governments. That is a no-go area that even Commissioner Malmström described as “toxic” although she still wants to reform it.  We say: it just cannot be reformed. Accept that, and move on.  There are alternatives to protect investors without discrimination and they should be considered carefully.  At the same time, investors have responsibilities to their workers, consumers and the environment and these should be made clear in TTIP.

Some people say that we are motivated by anti-American sentiments in taking a strong stand on this. We are not. The fact is that we are working closely with our sisters and brothers in the AFL-CIO, who share our views.

The report of the INTA committee was adopted by Parliament yesterday.  It is positive on labour rights and public services but, unfortunately largely ignores public concern about special legal treatment for foreign investors.  The vote keeps alive big business and big business only hope for special privileges.

But this is not the end.  TTIP will not be concluded this year and we must, with your help, continue to lobby MEPS and Governments.

I would also like to mention another trade agreement.  CETA.  The agreement with Canada.  The provisions on labour standards in CETA are not backed by material consequences if breached; and it does not fully guarantee protection for our public services.  It also includes ISDS.  This is bad in itself, but it can also serve as a Trojan horse for the 80% of American companies operating in Europe that have Canadian bases from which they could launch ISDS cases. We oppose CETA on those grounds.

President, in an increasingly interconnected world of globalised value chains, the battle for standard-setting is crucial.  And however much Europe can improve – and it can – we are still the envy of the world in this respect at least.

We must fight hard together to maintain European standards, and its social model in particular.  This is now facing another insidious threat. As you know the Government of your British neighbours is seeking to renegotiate its terms of engagement with Europe.  Although David Cameron has been evasive about exactly what he wants, it is clear that regulation, in particular of the labour market, is a target.

I of course welcome the joint statement you have agreed with the TUC warning that attempts to undermine and weaken worker protections will be opposed by your two organisations, and indeed by the whole European trade union Movement.

The threat isn’t just to British workers.  If Cameron succeeds, I can well imagine others trying to follow suit and an unravelling of the rights we have fought so hard to gain over the years.

It seems that at the recent European Council, the British Government conceded that there could be no treaty change before their referendum takes place, but that they want a legally-binding guarantee that changes will be implemented in the following years. Of course any treaty change will in particular necessitate a referendum here, and I need not tell you what that could lead to.

There is one point that I expect my successor will be raising with you if events go down that route.  We are adamant that any change in the Treaties should include a Social Progress Protocol that ensures that fundamental rights cannot be trumped by economic freedoms. This approach is backed, at least, by the Swedish Government. I think that European citizens are much more likely to vote for this than Cameron's anti-worker and anti-social approach.

I earlier payed tribute to David Begg.  I now turn to his successor.

Patricia, I know you will be a great leader in our European trade union community, and I wish you all the best for the future.

The ETUC Congress in Paris in September will be electing a new team and I hope and expect your own Esther Lynch will be elected as an ETUC Confederal Secretary. This will be the first time that an Irish representative will be part of the elected secretariat. This will be another sign of the high esteem in which the Irish Congress is held.

All of you will contribute, as our own Congress motto puts it, to: A Fair society – Quality jobs and workers’ rights - for Europe.

I wish you a good and forward looking Congress.

10.07.2015
Speech
In Economic and Social crisis, REFIT, TTIP
Over that turbulent period, Irish working people have borne the brunt of massive and unfair austerity policies. But you have been strong. You have been resilient. The Irish trade union Movement has, as always, faced and moved forward. I would wish today to repeat here the admiration for you of the whole European trade union Movement.
Print