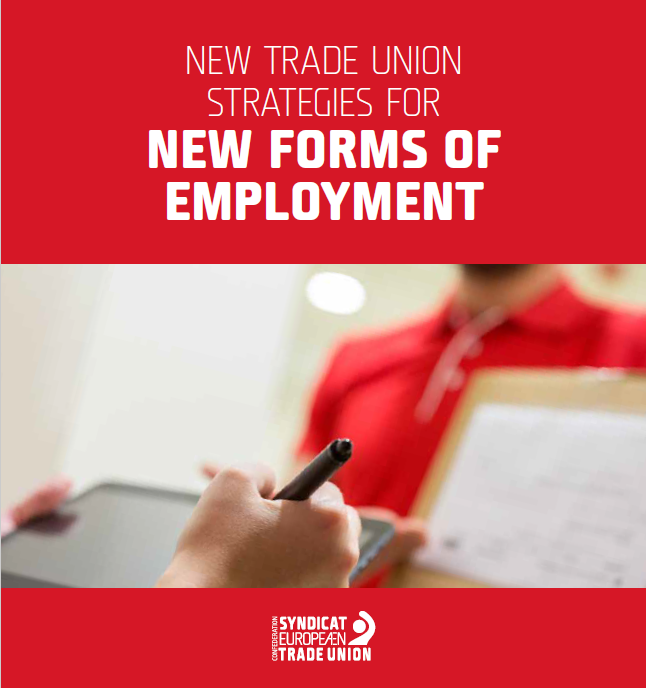 Circular to all ETUC member organizations.

The ETUC is pleased to send you its new report, ‘New trade union strategies for new forms of employment’, which you will find enclosed.

The survey was commissioned by the ETUC and carried out by Professors Countouris and De Stefano to explore options for new legal conceptual frameworks implied by the rise of ‘new forms of employment’, and in particular from the growth of forms of work that fall outside traditional labour and social security protections.

The research has generated original data in the form of national reports from Austria, Belgium, France, Italy, Sweden, Spain, Germany and the UK. We therefore would like to thank those unions and national legal experts who provided feedback and material to the authors.

Starting with the question “who is a worker?”, the report identifies similarities and differences between the countries covered by the survey. In a following part, after a comparative perspective on the various legal status of self-employed workers, the researchers test national laws against various labour scenarios. The findings show that the self-employed category is increasingly populated by a heterogeneous group of workers with a weak position in the labour market which prevents them from having a strong organisational autonomy or independence in the marketplace.

The report also tackles the collective labour rights of self-employed workers as well as legal obstacles to collective bargaining due to restrictive interpretation of antitrust law.

In a final part it examines the various proposals and debates on this issue at national and EU level and as a conclusion it puts forward a proposal for a new “personal work relation” to be potentially supported by unions. This proposal defines the personal scope of application of labour law (broadly understood as including individual and collective labour law - therefore encompassing the right to organise and bargain collectively - but also employment equality law) as applicable to any person that is engaged by another to provide labour, unless that person is genuinely operating a business on her or his own account.

This extensive report will provide you with a useful insight and a comparative perspective on the situation of self-employed workers across Europe. This is even more important in view of the upcoming European elections, where the protection of all workers regardless of their status should be put at the centre of policy making.

The flyer and the report are available at the ETUC and online. Please let us know if you wish to receive paper copies.