The ETUC is backing calls by Belgian unions for undocumented migrants to be given work permits in a bid to end a hunger strike by more than 400 people in Brussels.

The group of undocumented migrants, many of whom have been forced to work in the shadow economy for up to a decade, began the action on May 23 to highlight their request for regularisation and their condition is deteriorating rapidly as it enters a fourth week.

The FGTB and CSC unions, together with Belgian employers’ organisations, have today proposed that their government gives undocumented migrants work permits for shortage occupations. The joint op-ed in the La Libre newspaper points out:

“Employers in Brussels, but also in Flanders and Wallonia, are searching desperately for electricians, plumbers, bakers, butchers, stonecutters, lorry drivers and nurses. The Covid crisis has created acute shortages in sectors that were already facing structural labour shortages.”

It comes on the same day as the ETUC and European employers’ organisations met with the European Commission to press for better protections for undocumented workers under the Employers Sanctions Directive.

It follows a report by the EU Agency for Fundamental Rights on the implementation of the directive which found that member states aren’t doing enough to stop exploitation and concluded: “Workers do not know their rights or how to complain, and even when they do, they may not receive compensation due.”

The ETUC called on the Commission to ensure employers who exploit undocumented migrant workers face proper sanctions and that workers can raise violations without fear of being deported, receive proper compensation when they have been denied wages and given residence permits.

“The hunger strike in Brussels is first and foremost about human rights, of undocumented workers seeking to be respected. They have lived here for years and sometimes decades, their children are in schools with ours, but they live in fear of being detained and deported and work for €3 to €5 an hour.

“They are cooks, bakers, mechanics, waiters, cleaners or agricultural, construction, care and domestic workers. They cannot even make a complaint about being underpaid or worse - undocumented woman workers are harassed or sexually assaulted - because they would lose their job and risk deportation.

“The Belgian government must show some basic humanity and work with trade unions and employers on the practical solutions put forward to end this strike before somebody dies. Across Europe, we need a fundamental change in migration policy which prevents rogue employers using vulnerable people as cheap labour by creating regular routes to live and work.

“Regularisation stops the wages and working conditions of both migrant and local workers from being undercut. The only people who lose out are rogue bosses and racist politicians.” 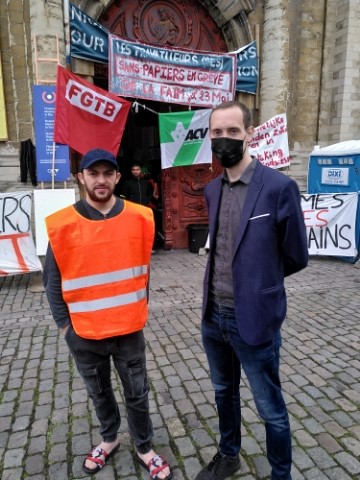