Time to deliver on women's rights: YES to the work-life balance directive!

For International Women’s Day, on March 8, trade unionists across Europe are calling for a swift adoption of the proposed EU Directive on work-life balance.

EU legislation in this field will strongly enhance women’s employment opportunities and enable a more equal take up of family-related leave by couples.

If adopted the new Directive will strengthen rights in many member states, according to a study* commissioned by the ETUC:

“It would make a real improvement to the lives of working women and carers if the work/life balance directive was adopted” said Luca Visentini, General Secretary of the European Trade Union Confederation (ETUC). “But some Governments are resisting it. We strongly urge member states not to put budgetary or subsidiarity concerns before gender equality and workers’ rights.”

“New rights would stop some women from giving up work, reduce care costs falling on health and social services, enable working fathers to take their fair share of responsibility, and boost gender equality” said Montserrat Mir, Confederal Secretary of the ETUC. “Governments and companies should give working parents and carers a helping hand, not stand in the way of making it easier to reconcile work and family life.”

The draft work/life balance Directive was published by the European Commission in April 2017, it follows the failure of EU Governments from 2008-15 to agree to extend maternity leave, and is due to be discussed by Employment Ministers on March 15.

According to Eurostat, the main reason for women in Europe for not to work is that they must look after their children or relatives with long-term illnesses. Studies show that women in Europe spend twice as long on domestic chores than men – even if the men are unemployed and the women are in work.

ETUC video on the Directive https://www.youtube.com/watch?v=L5SNVD03SRU&t=6s 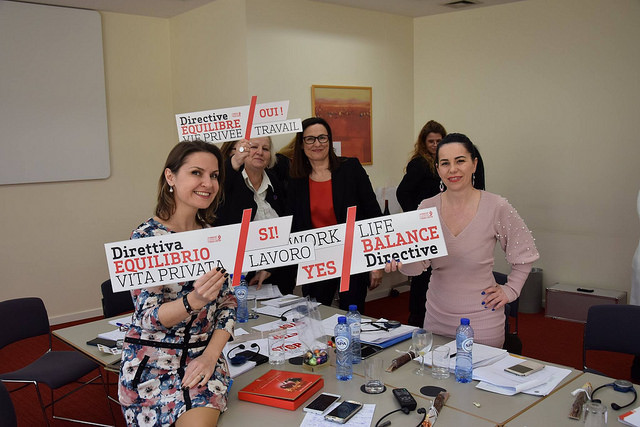