"Safe at Home, Safe at Work" - Briefing on the ETUC project

Prioritise social dialogue between employers and unions, in jointly agreeing policies, procedures and awareness raising amongst managers and workers.

Ensure that women are in senior negotiating positions, as this has been shown to be critical to getting issues of violence against women and sexual harassment onto bargaining agendas, particularly in male dominated sectors.

Produce guidance, model workplace policies and train workplace representatives to negotiate agreements and policies to tackle violence and sexual harassment at work and the prevention of domestic violence at work.

Ensure that safety and health and wellbeing at work initiatives include a strong focus on the causes of and solutions to harassment and violence against women work, by taking into account gender inequalities and discrimination.

Give information and support to workers experiencing sexual harassment and domestic violence.

Highlight the economic and social case for tackling violence at work, including the business arguments that tackling violence against women can help to improve workplace relations, enhance wellbeing at work, retain workers, reduce absence from work, increase motivation and productivity.

Training and awareness raising for union representatives, leaders and supervisors.

Data on violence against women at work

One in six workers across Europe report having been subjected to acts of violence, harassment and unwanted sexual attention (Eurofound). Sexual harassment at work range from 3% of workers in Belgium, between 4% and 20% of workers in Denmark, and between 16% and 20% in France.

Denmark has one of the highest reported rates of sexual harassment in Europe, with 80% of women respondents stating that they had been sexually harassed (in places not confined to the workplace) at some point in their lives and 37% had experienced sexual harassment in the previous year (European Fundamental Rights Agency).

A survey in Ireland found that there had been a 14% increase in the number of cases of bullying of nurses and midwives reported over the previous four years, and 6% of respondents said they were bullied daily.

In Germany, 52.2% of the women interviewed had experienced sexual violence and harassment either in a public space, at work or in the private sphere.

A report by the European Transport Workers’ Federation (ETF) on workplace violence against women transport workers, reveals that women working in the sector are subject to high levels of abuse, threats, intimidation and offensive behaviour. Responses from more than 1,400 women transport workers from across Europe show that: 63% of the respondents have experienced at least one recent act of violence; 25% of the survey participants believe that violence against women is a regular occurrence in the transport sector; 26% believe that harassment is considered to be ‘part of the job’ in transport.

In relation to third-party violence, estimates range from 2% to 23% of all workers; this rises to 42% of those who work in direct contact with the public, many of who are women. A union survey in Bulgaria found that over half of women transport workers experienced violence from passengers. Health workers are another group reporting high rates of third-party violence in Bulgaria and in the education sector in Denmark there was a 50% increase in physical violence against teachers by pupils. In the hotel and catering sector, a survey by 3F found that 24% of workers had experienced sexual harassment at work, mainly from clients. The Netherlands Working Conditions Survey 2011 found that 24% of workers were exposed at least once to some form of third-party violence from people such as customers, clients, students and passengers.

Collective bargaining is an important mechanism for agreeing measures to prevent and address violence against women at work, either as part of agreements that address violence against all workers, or in relation to specific issues, such as sexual harassment at work. In many EU Member States, violence and harassment against women at work has largely been addressed as a wellbeing at work issue, often as part of safety and health policies or under specific initiatives addressing violence and harassment of all workers.

ETUC study has collected evidence of nearly 120 agreements and workplace policies in the eleven country case studies, 80 of which address violence and harassment at work, with a particular focus on sexual harassment at work.

Domestic violence is a relatively new trade union and bargaining issue. However, some unions are negotiating agreements and workplace policies to enable victims of domestic violence to remain in work. Evidence shows that domestic violence often involves significant levels of coercive control, resulting in victims having to take sick leave or leave their jobs. Measures such as temporary paid leave, counselling, support, initial safety planning, changes in work location or parking spaces, and providing information about specialist domestic support organisations and protection orders in cases of stalking in the workplace, are some of the ways that trade union representatives have supported victims and negotiated measures for their protection and temporary leave, particularly when they leave a violent partner.

ETUC study has collected evidence of over 40 examples of CBAs and workplace policies on domestic violence at work in the eleven country case studies.

Raising awareness and campaigning to end violence against women

Many trade unions are actively campaigning to end violence against women. Partnerships between trade unions and NGOs have been an important part of this work. Examples of union awareness raising programmes include: 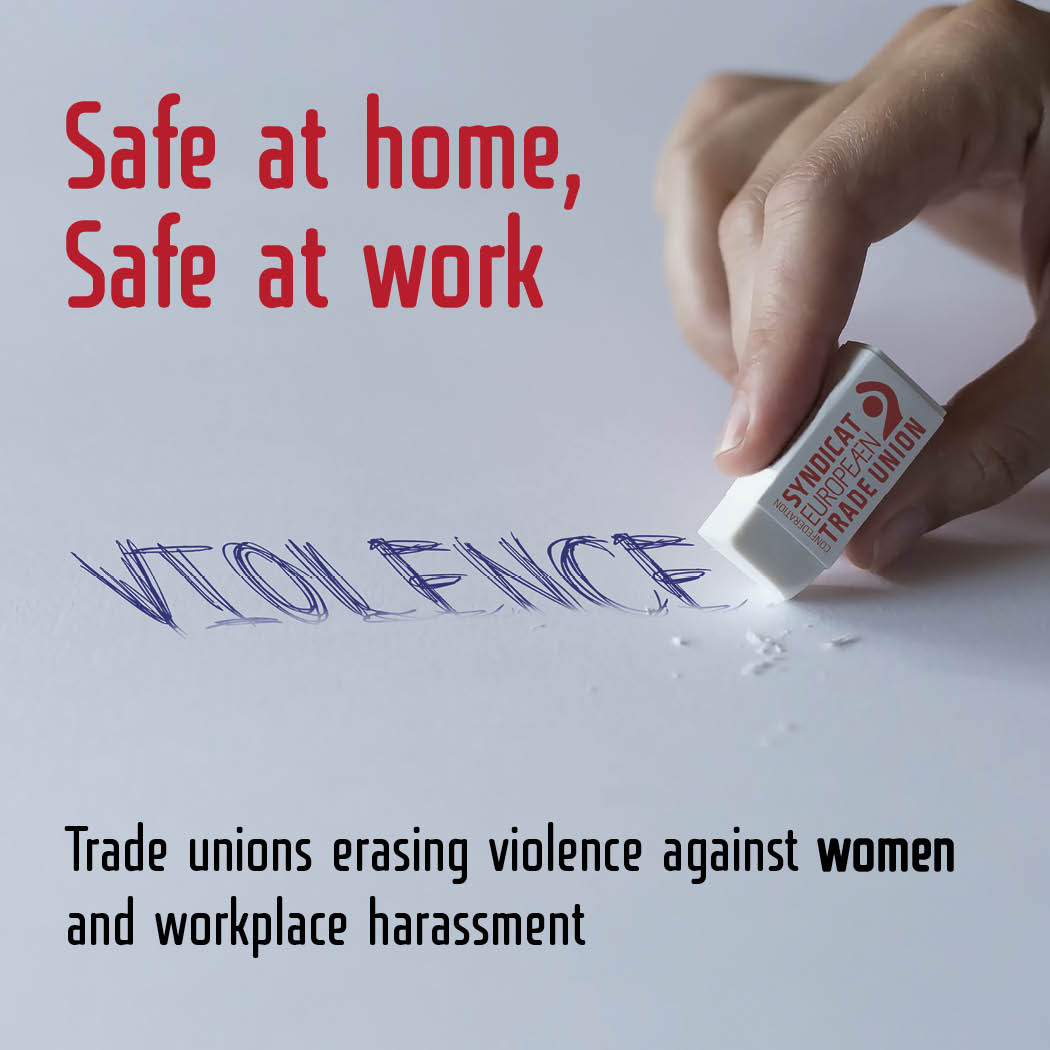