A Partnership Agreement between CEN (European Committee for Standardization) and ETUC (European Trade Union Confederation) will serve to strengthen the representation of workers within the European Standardization System. The agreement means that ETUC has the possibility to nominate representatives who will participate in the work of CEN Technical Bodies at European level. In this way, trade unions can directly contribute to the development of European Standards relating to the health and safety of workers, the delivery of services, and other issues of relevance to employees.

The Partnership Agreement between CEN and ETUC was officially signed by Elena Santiago Cid, Director General of CEN and CENELEC, and Bernadette Ségol, General Secretary of ETUC, at the CEN-CENELEC Management Centre in Brussels on 22 May 2015. Under this agreement, ETUC is recognized as a Partner Organization of CEN at European level. This means that ETUC may participate (with observer status) in the CEN Annual Meeting (General Assembly) and in meetings of the CEN Technical Board. ETUC may also nominate observers to participate in the work of CEN Technical Bodies (including Technical Committees and Working Groups).

Welcoming the Partnership Agreement between CEN and ETUC, Elena Santiago Cid, Director General of CEN and CENELEC, said: "In CEN and CENELEC we are committed to ensuring that all relevant stakeholders can be involved in the standards development process. Within CEN, various Technical Bodies develop and adopt a wide range of European Standards and other deliverables that contribute to protecting the health and safety of people at work. Therefore, it is important that workers’ representatives should be given opportunities to contribute to the process of drafting these standards – both at national level, through CEN’s National Members, and also at European level, through the partnership between CEN and ETUC."

Bernadette Ségol, General Secretary of the ETUC, said: "The ETUC has often underlined that many of the areas subject to standardization have wide-ranging effects on workers and should thus be channelled through democratic decision-making procedures rather than private standardization committees. However, the ETUC recognizes that working conditions are among the major societal challenges that standards can help to address on the condition that trade unions can effectively participate in standardization arenas. As such, the ETUC warmly welcomes the signature of this Partnership Agreement with CEN as an important step towards strengthening trade union involvement in European standardization." 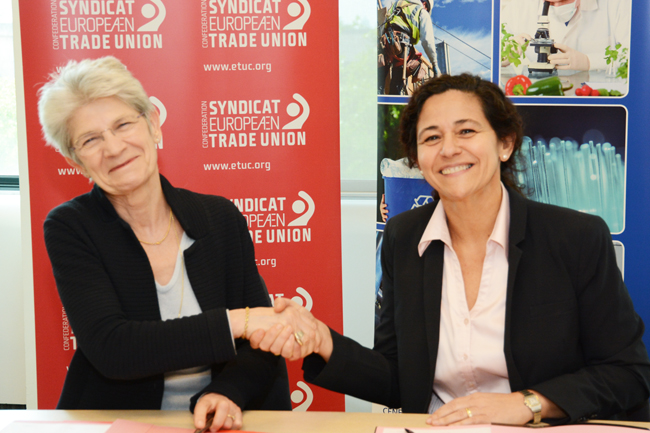