No Jobs on a Dead Planet

Trade unions leaders also took part in a photo action ‘no jobs on a dead planet’ in a spectacular 3D image of ice and drought. Photos can be found at https://www.flickr.com/photos/etuc-ces/sets/72157648370930738/ - and details on who took part at /no-jobs-dead-planet-0

“As trade unionists we want ambitious climate and energy targets with a just transition for workers and their communities to a low-carbon economy. The positive and negative job impacts have to be managed fairly, and workers must not be left behind by technological change.”

“The new President of the European Commission says he wants Europe to be the world’s number one in renewable energy – but he won’t achieve that with a 27% target that is not even binding on the member states.” 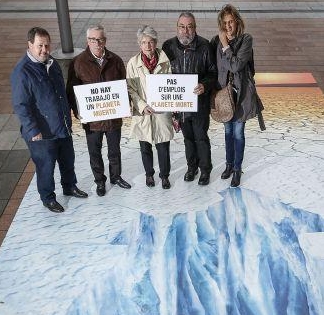