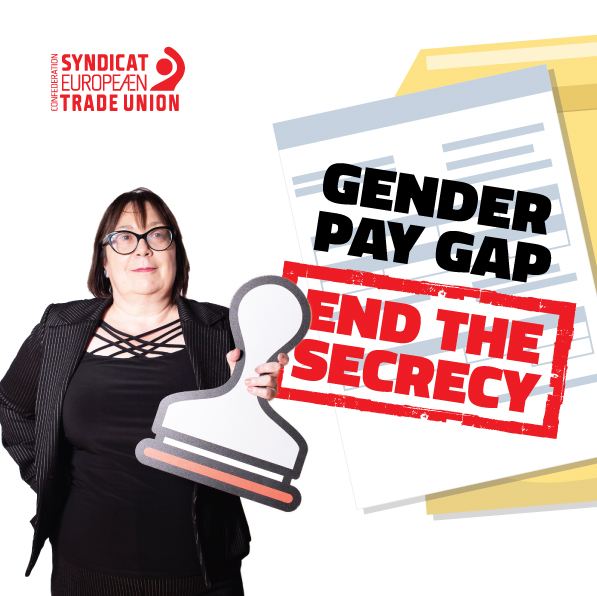 Just one fifth of adverts on Brussels’ biggest job websites are transparent over pay, a trend that is contributing to Europe’s 16% gender pay gap.

The ETUC analysed 100 job adverts on the Eurobrussels and Euractiv job websites in the first part of February and found just 19 of them gave details of a pay grade or pay range.

Most gave no details of what remuneration candidates could expect, while others stated that they offer a “competitive” package based on experience.

These practices open the door to gender bias and discrimination, sometimes unconscious, and have contributed to a gender pay gap which ranges between 28% in Estonia to 8% in Romania.

A requirement on employers to be transparent about pay scales in job adverts is among measures which the ETUC wants the European Commission to include in a pay transparency directive.

Other important measures include:

- Banning pay secrecy clauses in contracts
- Compulsory annual pay audits (including all bonuses) backed up with fines for non-compliance
- The right of workers to request pay data of colleagues, including gender pay information
- Support for collective bargaining as the best way to eliminate the gender pay gap
- Preventing employers hiding behind privacy, data protection or administrative burden to avoid pay transparency

The ETUC will stage a theatrical visual action outside the European Commission’s headquarters between 12pm and 1pm tomorrow (25/02) to highlight our demand to “end the secrecy” over pay.

“The principle of equal pay for equal work has been enshrined in the European treaties since 1957 so it’s high time to make this a reality. But our research shows once again that voluntary measures to close Europe’s scandalous gender pay gap have failed.

“That’s why we need make gender pay transparency compulsory in both the private and public sector to unmask the undervaluation of women’s work which lays behind this persistent inequality.

“The problem starts from the moment that employers post job adverts without being transparent about pay, which opens the door to sometimes unconscious discrimination against women.

“The binding pay transparency measures promised by the new Commission should start with requiring all job adverts to include a pay scale, ban pay secrecy clauses and introduce compulsory gender pay audits in order to finally end the gender pay scandal.”