Industry 2030 report is a step towards just transitions

Climate change and digitalisation are among challenges which must be dealt with in a socially fair way according to a new EU report on the future of industry.

The European Commission is today publishing ‘a vision for the European industry until 2030’ – the final report of their high-level roundtable set up in December 2017 which brought together unions with employers and experts to prepare an EU industrial policy.

The comprehensive report puts European industry on a path to an “innovative, sustainable, competitive and human-centered collaborative economy [that] respects planetary boundaries.” It proposes an action plan which includes massive investment in innovation on digital and zero or low-carbon technologies, a commitment to fair and rules-based international trade and to social inclusiveness that leaves no worker or region behind.

It also proposes to foster a culture of ‘social dialogue’ (negotiations between unions, employers and government) to all levels, which unions consider to be essential to achieve a socially fair transition. A co-ownership and inclusive governance for transformation is proposed with a focus on ethics in human-centric and trustworthy Artificial Intelligence, an open standard for the industrial Internet of Things, human-centred technology and an integrated approach to industrial competitiveness across various policies, including environmental and climate policies.The report puts industrial policy at the top of the agenda for the incoming European Commission and sets the scenes for the next Commissioner with responsibility for industrial policy.

Luc Triangle said: “This report is the result of intensive collaboration process which has resulted in many of our proposals on the future of industrial policy are reflected in this document. The voice of industrial workers has been listened to about the deep transformations that industry faces over the next decade, such as digitilisation and climate change. “Only if all workers and all regions are involved in the transition, and see a future for themselves and their children, will European industry be able to successfully meet the challenges of the 21st century.”

Peter Scherrer said: “After working on a European vision for our Industry in 2030 we have to turn it with the strong support of the EU member states into reality. It‘s the national policy makers who must act with a real European spirit.”

Isabelle Schömann, ETUC Confederal Secretary, added: “The report stresses the need to build an inclusive environment for a sustainable and socially fair industrial transition, where workers and their representatives have an important and active role to play in particular through social dialogue”. 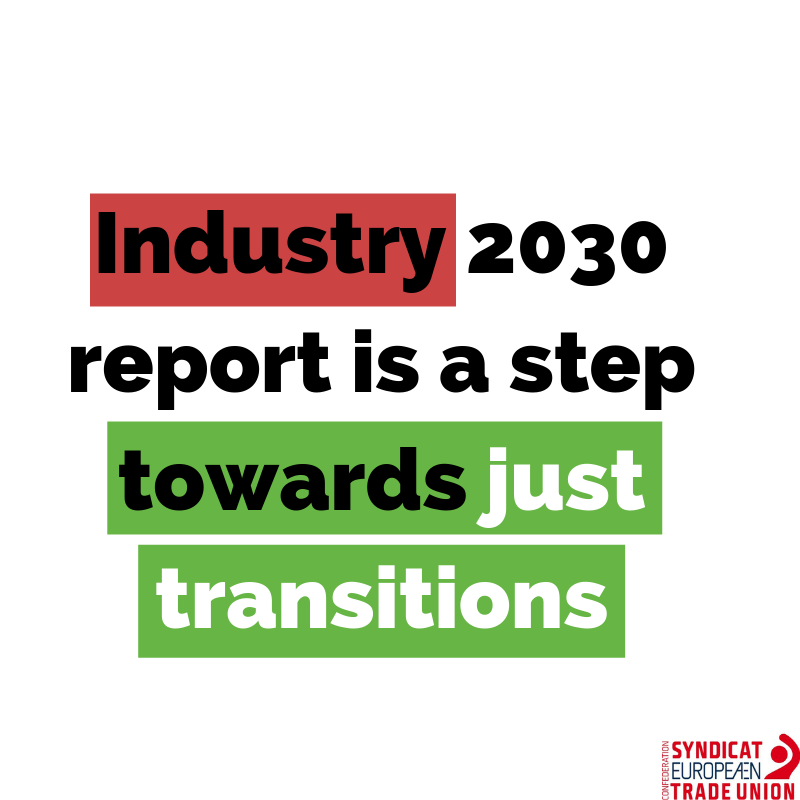