But the Commission must now put its money where its mouth is and refinancing the successful SURE job support for 2021 to ensure that all member states can maintain support measures as requested.

The Commission’s economic forecast for winter 2021 shows there is “light at the end of the tunnel” with strong economic growth returning in the second half of this year. The forecasted growth of 3.7% – 3.9% could be even stronger if there is an “ambitious and swift implementation” of the EU Recovery Plan, the report predicts.

However, the number one risk identified to a recovery is the duration of economic support measures in member states. The forecast says:

“This forecast assumes that supportive policies will continue in general as long as official containment measures pose serious limitations to business activity. A premature withdrawal of such support measures remains an important downside risk”

On the consequences of withdrawing support, the forecast adds:

“A delayed recovery increases the potential for permanent scars to the fabric of Europe’s economies and societies, predominately through bankruptcies and higher unemployment.”

EU unemployment – 16 million - is already up by 2 million compared to the previous year.  Today’s report says the “impact of the pandemic has been more severe than indicated by the traditional measures of employment and unemployment.”

“Today’s forecast shows job support measures are working and must be kept in place until a real recovery begins. Ending support now would cause mass unemployment and be a tragedy when there’s finally light at the end of the tunnel.

“But 90% of the EU money set aside to finance job support schemes in member states has already been allocated. The European Commission must refinance its SURE scheme if all member states are going to be able to follow its advice and keep support in place until the recovery begins.” 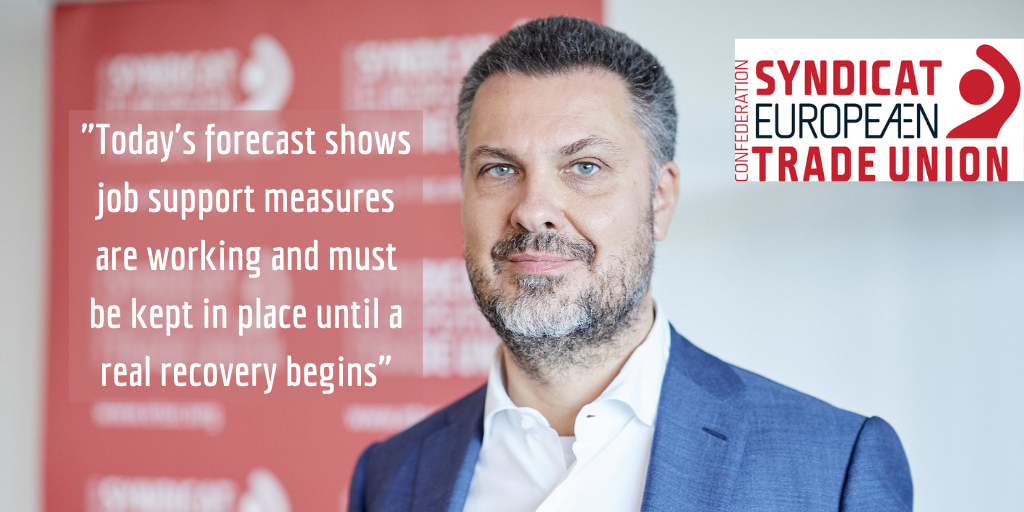