As the EU-Georgia Association Council prepared to hold its third meeting in Brussels (2 December), trade unionists from both sides demanded action to improve industrial relations and advance the rights and interests of working people in Georgia.

“Social dialogue, a pillar of the European Social Model, is not functioning properly in Georgia,” noted Luca Visentini, General Secretary of the European Trade Union Confederation. “There is no functional labour inspection to monitor enforcement of legislation, including on health and safety. Maternity protection is insufficient, and the minimum wage of 20 Georgian lari (€7.5) in the private sector is humiliating.”

“There are no national level collective agreements, the government pretends to carry out dialogue,” added Irakli Petriashvili, President of the Georgian Trade Union Confederation. “There is a growing number of labour conflicts about working conditions and respect of rights of workers, particularly in the state-owned enterprises. The government has yet to demonstrate that it is indeed ready to advance EU values and principles in Georgia and to promote a decent work agenda.”

While recognising the positive influence of the association process on Georgian economy and democratic reforms, the ETUC and GTUC called on the Georgian government to:

Note to editors: Luca Visentini is also General Secretary of the Pan-European Regional Council of the International Trade Union Confederation (covering trade unions from both EU Member States and other European countries) and Irakli Petriashvili is President of PERC . GTUC is a member organisation. 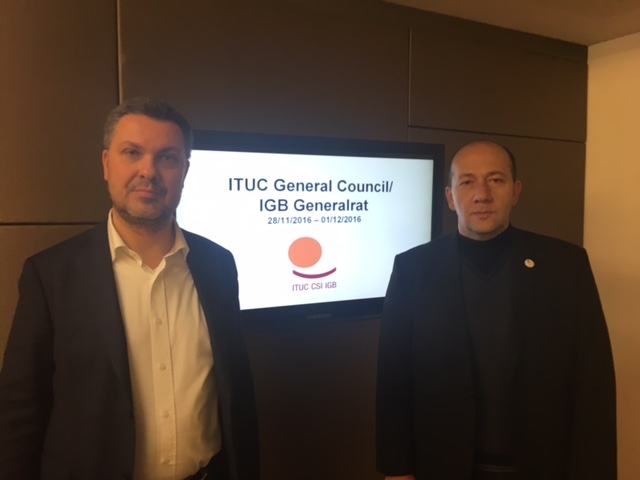