Major court rulings against the exploitative employment practices of platform companies this week show the urgency over EU action over this broken business model.

The UK’s Supreme Court ruled today that Uber must treat its drivers as workers rather than self-employed, throwing out the company’s fourth and final appeal in a legal battle which began in October 2016.

It follows a judgement on Wednesday by a court in the Netherlands against Deliveroo. In a case brought by ETUC affiliate FNV, Amsterdam’s Court of Appeals ruled that Deliveroo’s food delivery riders are employees and must be treated as such.

That was the third major court defeat suffered by Deliveroo in the past two months. In Spain, Deliveroo is to pay 1.3 million euros in social contributions following a Barcelona Court ruling establishing that 748 Deliveroo’s riders were falsely self-employed. In Italy, the Court of Bologna ruled in favour of a complaint about the fact that Deliveroo’s algorithm, Frank, discriminated workers’ and restricted their access to working slots following absences for strike, or for health or care reasons.

Trade unions have also secured victories over Uber, Globo and Temper since November. The clear trend in rulings is already seeing some platform companies voluntarily giving workers contract. In France, Just Eat plans to hire 4,500 riders in 30 French cities by the end of 2021. Meanwhile, trade unions have successfully negotiated collective agreements for couriers in Denmark, Austria and Sweden.

But the need for European level legislation is clear and the European Commission will next Wednesday launch a consultation on the “working conditions of platform workers.”

“For the last decade, platform companies have exploited loopholes in labour law to make big profits by flouting their obligations to give workers contracts with proper pay and conditions. It is not only unfair to workers, but to the vast majority of business who play by the rules and citizens who depend on well-funded public services.

“Trade unions are successfully challenging platform companies in the courts across Europe and their business model based on exploitation becomes more unsustainable with every ruling.

“But while judgements create important legal precedent, they sometimes only deliver justice for individuals or small groups of workers when platform companies continue to exploit millions of workers.

“It is clear that a European-wide initiative is needed to end this scandal once and for all, and to stop it spreading to other services or sectors. We do not want to be campaigning in the future for the rights of Uber ambulance drivers or Uber nurses.”

The ETUC is calling for EU action to ensure:

Legal clarity from the European Union would also be helpful, particularly to prevent large platforms threatening to leave EU member states where national regulation of platforms is being debated. 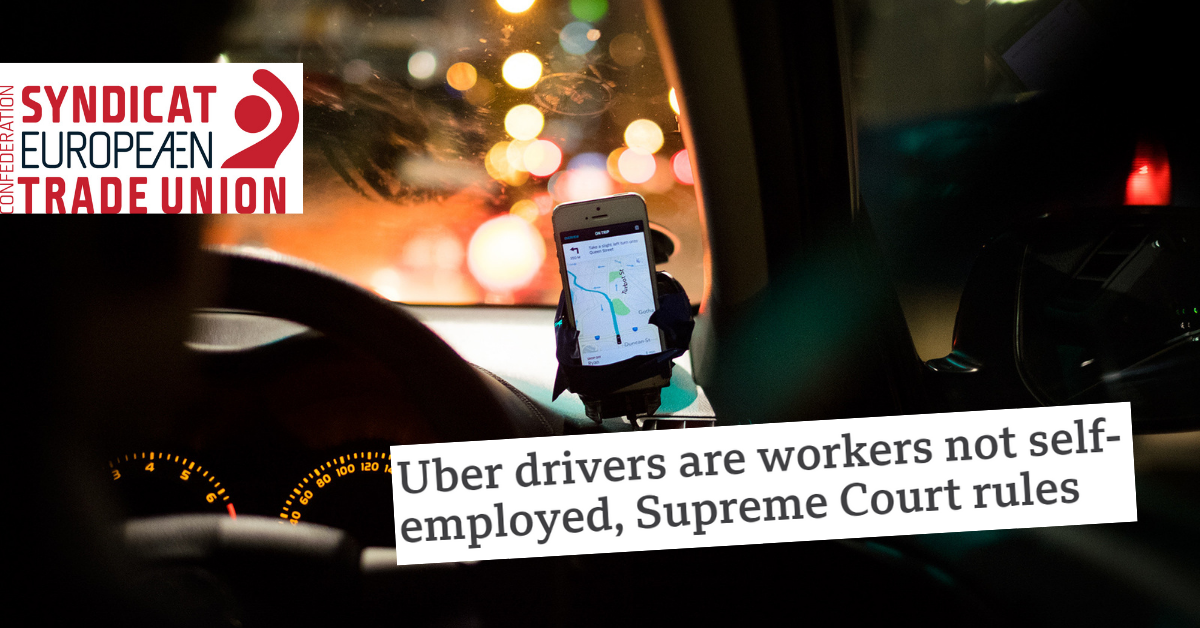