Japan is the EU’s second biggest trading partner in Asia, and together the two blocs account for more than one-third of world GDP, so the stakes are high.

“The EU-Japan trade deal must allow for the social partners and civil society to be involved in monitoring and enforcing agreed international labour standards, including ILO Conventions and the Decent Work Agenda,” declared RENGO General Secretary Naoto Ohmi.

Trade unions are also demanding greater transparency and disclosure of documents. “Negotiators must conduct their work as openly as possible, in order to secure public support for an eventual deal. We need a mechanism for consulting the social partners on the progress of the talks,” said Naoto Ohmi.

“Essential public services must be explicitly excluded from the agreement, to protect them from privatisation by profit-seekers and the erosion of social, environmental and health standards in the countries concerned,” added ETUC General Secretary Luca Visentini.

“The ETUC also rejects the setting up of Investor State Dispute Settlement mechanisms (ISDS), which give foreign private investors special privileges in relation to governments. Standard-setting must remain in the hands of democratically elected lawmakers.”

Note for editors:
EU-Japan Free Trade Agreement negotiations were launched on 25 March 2013. The 15th round of talks starts on Monday 29 February. 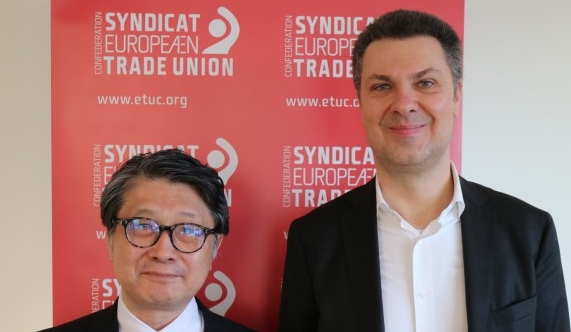