ECtHR ruling on right to strike

The European Court of Human Rights (ECtHR) today stated that the right to strike takes precedence over the ‘economic freedoms’ of the single market.

The ECtHR held that Article 11 of the European Convention on Human Rights which protects the right to strike had not been breached by Norway’s Supreme Court when it ruled unlawful industrial action by dock workers to protect their pay and working conditions.

But in contrast to the Norwegian Supreme Court, the judgement states that the freedom of establishment for businesses is not equal with the right to strike and therefore cannot take precedence over it. The ECtHR indeed argued that this freedom is not a counterbalancing fundamental right to freedom of association but rather only one element amongst others to take into consideration when assessing at national level the proportionality of a strike action.

This is an important ruling for the European trade union movement, as it establishes a clear hierarchy of rights with those of workers taking precedence over economic freedoms. This has long been a contentious issue within EU law, following the European Court of Justice's judgments in the Viking and Laval cases, which the ECtHR has now clarified for the first time.

Already before the ECtHR judgement, the ‘Holship’ case been described as “one of the most significant cases in European labour law so far this century” by European labour law expert John Hendy QC. It centres a dispute in the port of Drammen between dock workers and a company, Holship Norge AS, which sought to break an agreement on pay and working conditions which had been in place since 1976.

The agreement based on ILO Convention No.137 provided set rates of pay and minimum periods of employment in an industry which has previously been dominated by casual labour hired by the hour. It also gave priority of employment to registered dockworkers and ensured each of Norway’s ports was served by a permanent pool of qualified dock workers appropriate to the size of each port.

Cargo company Holship Norge AS, the Norwegian entity of a Danish company, decided to breach this agreement by hiring casual labourers. In an effort to uphold the agreement, the Norwegian Transport Workers’ Union (NFT) organised a boycott of Holship Norge AS ships. The Norwegian supreme court and the EFTA court ruled the boycott unlawful as it would breach the company’s freedom of establishment.

This is part of a trend in rulings placing the interests of business over the rights of citizens and which risks rolling the clock back on workers’ rights by decades. The NFT and the Norwegian Confederation of Trade Unions (LO), with the support of the ETUC, referred the case to the ECtHR.

“Today’s ruling is a step towards a fairer balance in favour of the human rights to strike and collective bargaining for fair pay and working conditions as opposed to the narrow individual interests of business.

“Dock work among the worst paid and most insecure way to earn a living in Europe before trade unions won collective agreements and Norwegian dockers were right to refuse to return to the brutal conditions of the 1970s.

“Failure to do so would not just have set the clock back on workers’ rights in Norway but have provided a loophole that could be exploited by irresponsible employers everywhere.

"However, the outcome of the judgement in practice still leaves too much discretion to restrict human rights with reference to mainly economic arguments.

“This case sets out the choice facing Europe: an economy built on quality and well-paid work through collective bargaining or a race to the bottom in wages and security that would undermine Europe’s social model and hugely increase inequality. 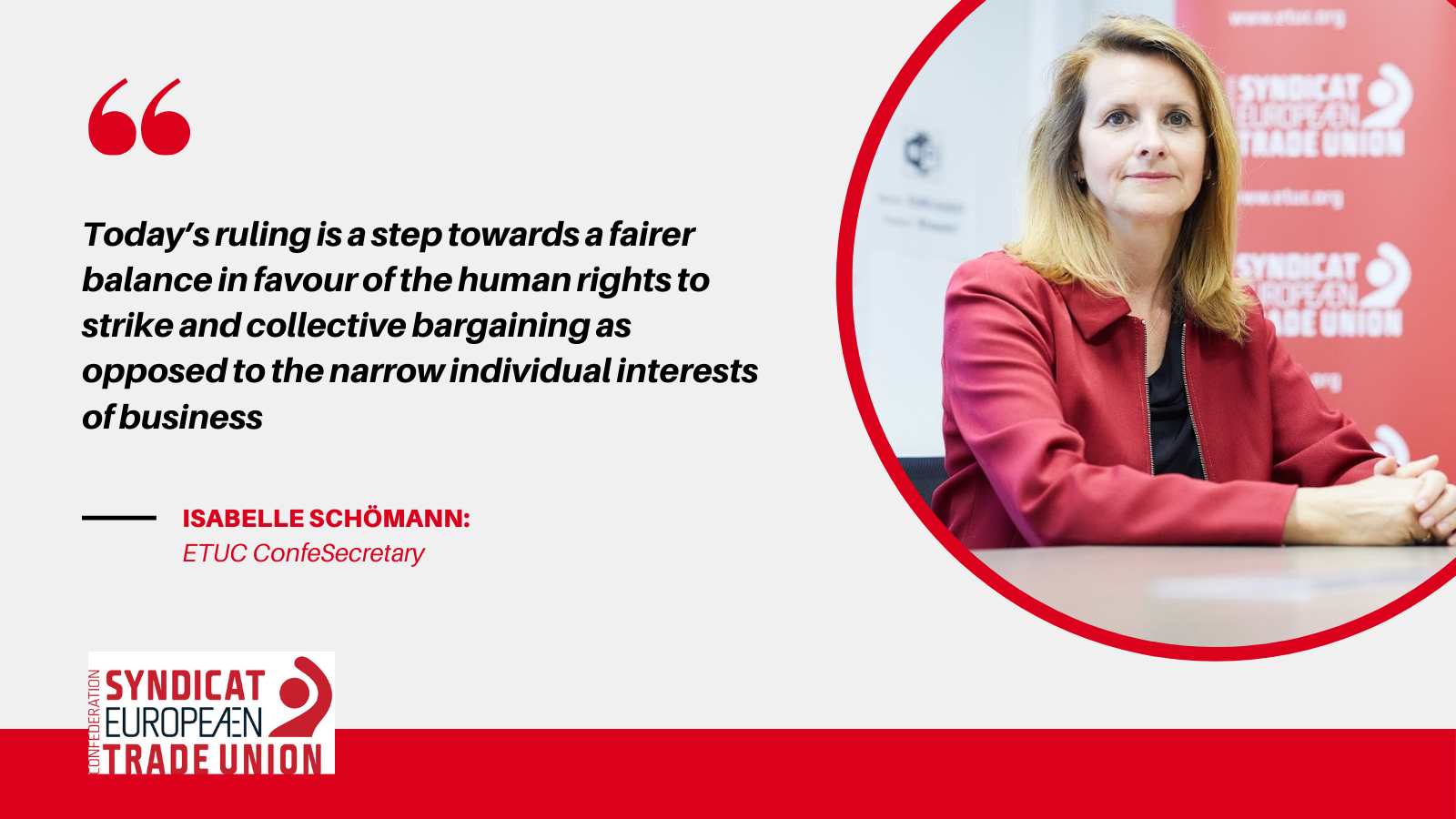