ETUC general secretary Luca Visentini and UGT general secretary Pepe Álvarez, who also spoke on behalf of the CCOO, held an online meeting with Commission vice-president Valdis Dombrovskis to discuss his recent comments regarding Spanish government plans for progressive labour and pension reforms as part of its national recovery plan.

The planned labour reform would reverse a 2012 law, passed by the previous Spanish government as part of Commission-mandated austerity measures, which pushed down wages by ending sectoral collective bargaining in favour of weaker company level deals and increased unemployment by making work more precarious. The result was an increase in poverty and inequality.

In today’s meeting, union leaders sought guarantees that Spain’s recovery plan would not be subject to austerity conditions that are not part of the Commission’s Recovery and Resiliency Facility and would go against its social objectives.

Afterwards, Mr Visentini said he felt reassured that the Commission had abandoned any politicised intervention and was committed to the promises made to citizens at the Porto summit last month about how Europe will raise living and working standards through stronger social rights.

“The Commission’s interference in Spain far oversteps its competences over national social dialogue, contradicts its own social objectives and shows it still has lessons to learn from the failure of its response to the financial crisis.

“Spain’s current labour law was introduced as part of austerity measures after the last crisis and resulted in lower wages and higher unemployment. Strengthening collective bargaining to repair the damage of past reforms is badly needed to lift people out of poverty through secure jobs and fair wages as well as ensuring a fair transition to a digital and green economy. A pension system whose main aim is to ensure dignity in ageing for all is also needed.

“We made clear to Commissioner Dombrovskis today that there is no mandate for austerity conditions like weak workers rights to be imposed on national recovery plans and called on him to respect and uphold the process of social dialogue taking place in Spain.”

Pepe Àlvarez speaking on behalf of UGT and CCOO pointed out during the meeting that more than 4 million workers in Spain are not protected by a collective agreement - 10 times more than before austerity reforms.

He said: “If we want to have fairer wages in Spain workers should be given the right and the opportunity to bargain collectively.

More broadly, Mr Visentini also stressed that emergency measures to mitigate the effect of the Covid crisis on workers must be kept in place across Europe until employment has fully recovered, which followed the mixed messages sent by Commissioner Dombrovskis over public investment on Wednesday.

Letter sent by ETUC, UGT and CCOO to Commissioner Dombrovskis 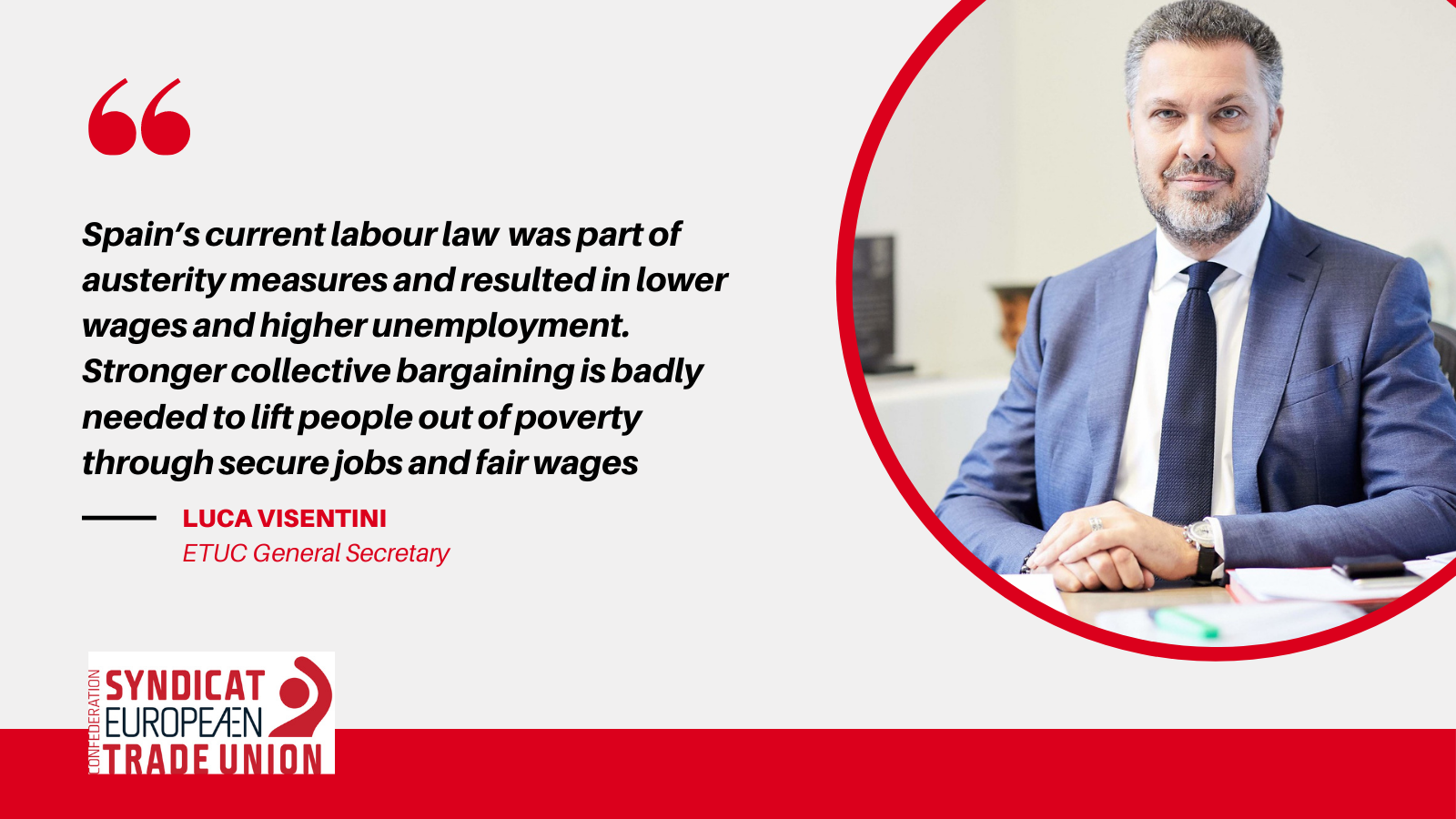