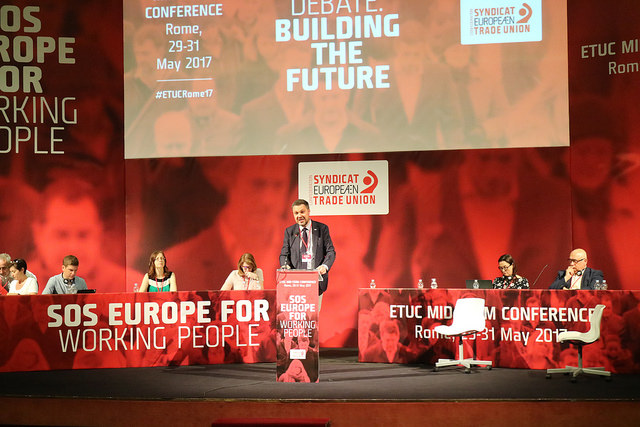 Declaration adopted at the ETUC Mid-Term Conference in Rome on 29-31 May 2017.

A banking crisis led to government debt crisis. Economic crisis led to social and political crisis. Austerity was the wrong medicine and has created widespread disillusionment and a backlash against Europe. Violent conflict in neighbouring regions, and terrorism at home have added to the sense of crisis. Unprecedented numbers of refugees are fleeing to safety in Europe. Workers see how digitalisation and climate change can impact on their jobs and their lives, but few of them see policy-makers addressing these challenges.

Europe is now recovering with slow growth and unemployment is gradually falling. But recession followed by tentative recovery is no cause for celebration. Also, as an aftermath of the crisis and the austerity measures, many young people are left in the margins of the labour markets and the educational systems.

Instead, the reversal in the rise of anti-European and anti-foreigner forces in some recent elections, and an emerging political debate about more worker-friendly policies, increasing wages and tackling inequality, offer some encouragement.

The shock of the political fallout from the economic crisis has, over the last year, created a mood of reflection on the future – of Europe, of labour, of globalisation.

EU institutions are now releasing funds for investment, talking up wage rises and even increased public spending. The European Commission has launched a debate on a European Pillar of Social Rights, on the social dimension of the EU, fairer globalisation, and the future of the EMU. In its White Paper on the Future of EU 27, President Juncker has described five scenarios, among which our preference goes to the one that implies more unity, integration and upward convergence. On the 60th anniversary of the Treaty of Rome, national governments pledged to work towards a social Europe which promotes economic and social progress. And EU member states seem to have achieved a unanimous position on Brexit.

Today, we can affirm that the ETUC played a crucial role in pushing EU institutions to change their approach. Yet austerity is not dead.

The EU’s Stability and Growth Pact is a straight-jacket preventing many countries from investing in better public services, jobs and growth. The recent third agreement between Greece and its creditors shows that neo-liberal policies are still harming people’s and workers’ hopes and lives.

The ETUC is pleased to note that some European leaders are now pushing for more flexibility, for more room for growth-friendly economic policies and to ease the burden on working people. However, new policies are far from achieving consensus. The European Pillar of Social Rights is long overdue, could be more ambitious, and might yet be killed off by hostile governments and employers.

There are many difficult challenges ahead. Brexit was not the choice of the ETUC or of UK trade unions, and together we insist that the rights of working people and citizens must be paramount. The growth of bogus self-employment, temporary or part-time work, and other precarious jobs are the dark side of today’s slowly falling unemployment. Trade unions organise to defend workers’ rights, and will press for new laws. Digitalisation and climate change policies need to be anticipated by a just transition that equips working people and industrial regions to adapt to change and create new jobs.

The refugee crisis is not resolved. Refugees are stuck in Turkey, Libya, Greece, Italy and the Balkans. Trade unions pledge to redouble their efforts to bring about a fair redistribution of refugees across Europe and work with employers to integrate refugees into the workplace.

Together with affiliates, the ETUC must seize the opportunity to push European policy-makers in the right direction. Now is the moment, not to talk about setbacks, but to strengthen our demands on behalf of working people, for increased public investment and for quality public services, decent social protection to tackle inequality, fair taxation, fair wages and good working conditions, and a better work-life balance across every EU member state.

This is the moment for trade unions to be more active than ever in efforts to manage globalisation, digitalisation and climate action to ensure that working people are not left on the scrap heap, and to reduce persistent gender and regional inequalities.
Trade unions demand action by employers and government at every level from local to European.

EU institutions should be more democratic, transparent, accountable and efficient, workers and citizens want to feel their voice heard by decision makers, and that EU and national governance can be influenced by them.

Trade unions are gathered here in Rome to debate our priorities for the Future of Europe and a more Social Europe, on the basis of the ETUC Platform on the Future of Europe.
We are committed to deliver. We want to respond to workers’ needs and expectations with concrete solutions, and to do so we will act together for:
•    Investment for sustainable growth and quality job creation, and quality public services.
•    Pay rises and upward wage convergence, through stronger collective bargaining, social dialogue and workers’ participation.
•    Just transition towards a low-carbon economy, sustainable digitalisation and automation, fair globalisation, a progressive trade agenda, and the future of work.
•    A more social Europe and stronger social rights, through a strong European Pillar of Social Rights which makes life better for workers, and a Social Progress Protocol.
•    Action to fight social and wage dumping and achieve full equal treatment and integration, through fair mobility and migration in a just internal market.
These are our priorities for a better Europe in the future.

Investment
The ETUC appreciates the Juncker plan – particularly in its second version, and values the role of the ECB, the EIB and the other European financial institutions and vehicles in relaunching investment in Europe, linking it to job creation.

But it is not enough. The funding is inadequate (the ETUC’s target of 2% of GDP, to have a significant impact on growth, is endorsed by all international financial institutions). The fiscal space allowed to member states to invest public resources is still too tight.

European fiscal rules and economic governance must be reformed, and we expect the reflection on the future of EMU and the Semester process to go in this direction.
The ETUC reiterates its demands on flexibility and fiscal capacity, including the creation of a EU/EMU Treasury, as well as a progressive European policy for tax coordination, to be included in the discussion.

Wages – collective bargaining, social dialogue, workers’ participation
The ETUC has launched a Pay Rise campaign, to respond to the unacceptable drop in wages over the last decade in Europe, to catch up with growing productivity, and to address inequalities in wage share, the gender pay gap, and massive wage divergence between Eastern and Western countries. We are convinced that increasing wages is not only a matter of social justice, but also a win-win deal to support internal demand and economic growth.
We call on all national confederations, and on the ETUFs and their affiliates, to support this campaign, and to increase efforts to spread the word about our Europe-wide initiative on wages, including cross border wage convergence, starting from multinational enterprises and their supply chains.

The Commission began to improve trade union involvement in the European Semester, which has gone some way to rebalancing the previous narrative on wage moderation, and committed to the relaunch of social dialogue at all levels. Nevertheless, the results achieved are not yet satisfactory, and we are committed to improve the process at both European and national level, and to push the Commission towards a more social-friendly Semester, which promotes fairer wage share, wage upward convergence and stronger collective bargaining.

We therefore expect wages and collective bargaining, social dialogue and workers’ participation, to be key objectives in the implementation of the Pillar of Social Rights.

Just transition - climate change, digitalisation, globalisation, trade, the future of work
European and national institutions must protect workers’ rights, to make sure that no one is left behind, that for each job lost more than one job (a quality job) is created, and that the necessary public funding and institutional governance is available.
We thank the European Parliament for supporting the ETUC proposal for a Just Transition Fund to manage climate policy impacts on the economy and jobs. We ask the European Commission to set up the fund, to include ‘just transition’ in the Reflection Paper on Globalisation, and to follow the same ‘just’ logic in proposing new ways to fund labour transition measures for European workers affected by digitalisation and automation.

We will adopt an ETUC initiative for a progressive and fair trade agenda, to be negotiated with the European Commission and all other trade union partners and institutional interlocutors over the world.

We are also heartened that the Commission has come forward with a package of legislative and non-legislative initiatives to promote a better work-life balance, such as paid parental and paternity leave.  It is now time for the member states to show how committed they really are to gender equality and workers’ rights. This is a question of credibility.

We want proposals that work, that meet workers’ expectations and needs, and delivers concrete results. The Commission must be ambitious in improving the floor of rights for all categories of workers and guaranteeing non-regression, setting clear standards for upward convergence, ensuring universal access to and adequacy of social protection systems, reducing precariousness at work and boosting quality job creation, ensuring that the achievement of rights becomes a focus for the European Semester, and making sure that European economic governance becomes a ‘social and economic governance’, with social rights and economic freedoms having the same level of importance.

The ETUC with its affiliates will work to convince all social partners and member states to support the Pillar of Social Rights. The Social Summit on 17 November in Gothenburg should be the occasion for EU leaders to endorse the Pillar and relaunch Social Europe.

The ETUC will relaunch its initiative for a Social Progress Protocol, as an essential part of and condition for any possible Treaty change – if no Treaty change happens, we will explore other possible legislative initiatives, to ensure that social rights and economic freedoms have the same level of importance in the EU rules and practices.

Mobility and migration
Every month, every week, we see people dying at sea. We do not accept this situation. We cannot accept the lack of responsibility and solidarity shown by most EU member states towards migrants and refugees.

It is time for Europe to care for refugees and migrants, for both humanitarian reasons and long-term economic and social interests. This must be done by meeting the needs of both migrants and native citizens and workers, to avoid them being played off against each other by populist and xenophobic forces. Unfair competition among workers, unemployment and social exclusion, social and wage dumping are our enemies. We need to build fair mobility and migration, providing everybody with quality job opportunities, full equal treatment, and integration and inclusion in the labour market and society.

We demand ‘the same wage for the same work in the same place’, as well as upward wage convergence in Europe, between countries and sectors, as within multinational companies and their supply chains.

We regret that most Member States have cut funding for international cooperation with the countries of origin of migration, and advocate for a more effective development cooperation policy of the EU and its members.