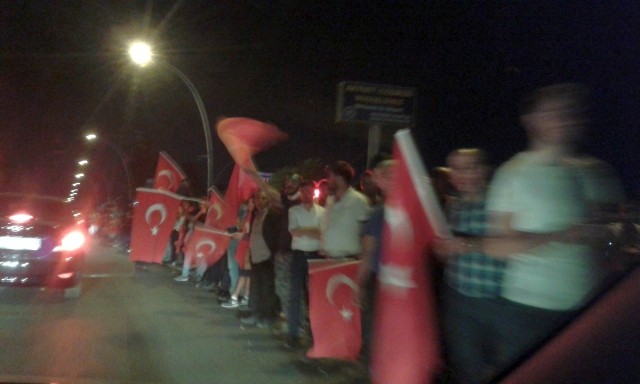 The ITUC and ETUC have strongly condemned the failed coup in Turkey and offered our deepest condolences to the victims. Unconstitutional attempts – especially involving military force – to seize power and overthrow democracy are unacceptable. We call for the investigation and eventual prosecution of those responsible to be conducted in full respect of the rule of law.

The ITUC and ETUC are also deeply concerned by the Turkish government’s drastic purge launched in the immediate aftermath of the coup attempt. Many civilians are amongst the thousands of people arrested and detained. Tens of thousands of workers and citizens have now been dismissed or suspended from their jobs. Plans have been announced to replace 20,000 teachers, among them thousands of trade union members. The coup attempt cannot be used as an excuse to eradicate democratic opposition through a "state of emergency" investing enormous power in the hands of President Erdogan, without any democratic control.

Amnesty International has described “credible reports” that detainees are being subjected to torture and sexual assault.  Reports that the government is considering re-introducing the death penalty are of deep concern.

Turkey must fully respect human rights, fundamental freedoms and democracy, and abide by the rule of law. As a candidate for EU membership, it must comply with the European Convention for the Protection of Human Rights and Fundamental Freedoms, which rejects the death penalty.

The actions of the Turkish authorities add further concerns about the situation of refugees in Turkey, which cannot be considered a safe haven for vulnerable people who are in need of protection.  The EU should now end the EU-Turkey Deal and Member States should accelerate the resettlement of refugees under an enhanced asylum system.

We call on the international community to stand with the people of Turkey and their democratic rights under international law, and to apply maximum pressure on the Turkish authorities to respect the fundamental rights enshrined in international and European law. We further call upon the European Commission and the Council to condemn the crack-down in Turkey. The Turkish EU candidacy is at risk, and the suspension of the accession process has to be seriously considered if the violations of the values of the EU continue.

The ITUC and the ETUC stand in full solidarity with the people of Turkey, and will do all in our power to support the full restoration of democracy, human rights and respect for the rule of law.