Towards a new framework for more democracy at work: ETUC resolution 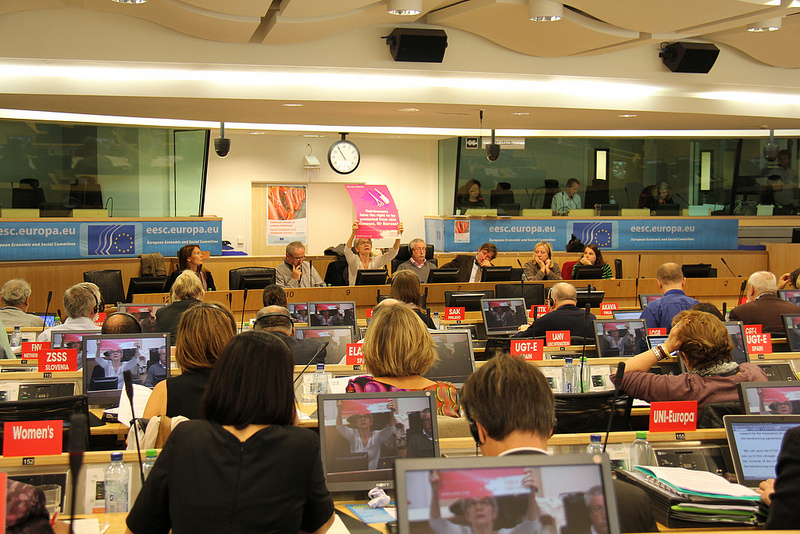 ·   The ETUC calls for a Directive introducing a new and integrated architecture for workers’ involvement in European company forms. Building on the existing EU acquis, the Directive should set high standards on information and consultation, and introduce ambitious minimum standards on workers’ board level representation as an additional source of workers’ influence.

·    A Directive on rights to information, consultation and workers’ board level representation applicable to all European company forms would address the gaps and loopholes in the EU acquis. Above all, by demanding such a Directive the ETUC is proposing a truly European vision for EU company law. The Union needs to send strong signals that it defends a business model based on social justice and sustainability.

·    Prerogatives of trade unions are key and should be secured throughout the Directive.

Democracy at work – the need to strengthen workers’ involvement


The right to information and consultation is a fundamental right recognised in particular by the Charter of Fundamental Rights and the revised European Social Charter. It is also a social objective of the European Treaties. This means that the Union is not only under the duty to protect dialogue between management and labour; it is also required to promote it. It is long standing ETUC policy that workplace democracy is a key element of a sustainable company.  In sum, the case for more workers’ involvement can be made in the name of both social justice and good corporate governance. Yet there are a number of weaknesses in the EU acquis and its implementation, which jeopardise this vision for a fair and sustainable company.

Furthermore, the EU’s approach to company law and corporate governance challenges the very principle of democracy at work.  EU company law is characterised by a minimalist approach based on very light-touch regulation and a strong mutual recognition principle. EU action is restricted to removing barriers to cross-border business rather than promoting a European model for corporate governance. The Refit agenda is a recent demonstration of this extreme deregulation approach. Workers’ involvement is treated as a potential burden to businesses rather than as an asset[1] or as a right to be given equal precedence.

The consequence of this approach is an erosion of workers’ involvement rights and an incoherent EU acquis. European company law does not fight regime competition and the inevitable race-to-the-bottom that goes with it. Company managements feel free to misuse European law to minimise their obligations under national law. They are also able to organise their corporate structure in order to pick and choose the less “inconvenient” national legislations (e.g.: letter box companies).

Because the different stages of European legislation in this area have been so inconsistent, European company law is full of loopholes, gaps, and discrepancies.  Procedures and principles for workers’ involvement vary widely between different pieces of legislation. Today, the level of rights and obligations achieved in the SE Directive is regularly put into question in subsequent instruments. For instance, the cross-border merger Directive refers to the SE Directive only in so far as board-level representation rights are concerned. Information and consultation rights are explicitly excluded.  Another example is the 2014 proposed Directive for a single-member private limited liability company (the ‘SUP’), which removes almost all references to workers’ rights. The proposal also generates strong concerns with regard to fiscal and social security evasion and sustainable corporate governance in general[2].

In this light, the Athens ETUC Congress mandated the new Secretariat to strengthen the in-depth work on information, consultation and workers’ participation.  A December 2011 Resolution[3] confirmed this mandate, stating that the EU institutions should be provided with a detailed ETUC proposal for European standards on workers’ involvement.

Without prejudice to Member States’ prerogative to import EU principles into their national system, the Directive on information, consultation and workers’ board level representation should apply in cross-border situations only. No matter which EU law a company relies on to create European company forms (such as the SE, SCE), it would always adhere to the standards of the new Directive. In other words, the Directive would become the single reference on information, consultation, and workers’ board level representation for all European company forms. It should be clear that this new Directive would accommodate the existing acquis on information and consultation rights (e.g.: Directive 2002/14/EC) and not replace it.

Horizontal standards on information, consultation and workers’ board level participation would address the gaps, loopholes and inconsistencies in the EU acquis, reducing incentives for abuses and circumvention.

Above all, by demanding such a Directive, the ETUC is proposing a truly European vision for EU company law. The Union would be fostering good corporate governance, based on a socially and economically successful model for European company forms. Transnational companies have emerged as key players at the European level, benefitting from and in turn shaping European market integration. Clearly, the EU legislator cannot satisfy itself with a mere coordination role between different national company statutes, based essentially on a country of origin approach.  On the contrary, the emergence of a cross-border, genuinely European standard for workers’ involvement is the dynamic contribution of the labour movement to the European project. The Union needs to send strong signals that it defends a business model based on social justice and sustainability. Comprehensive transnational standards on workplace democracy are an expression of the original spirit of European integration:  the promotion of sustainable, forward-looking principles.

Cornerstones for an EU Directive on information, consultation and workers’ board level representation in European company forms

The ETUC calls on the new Commission to prepare a consultation of the European social partners on rights to information, consultation and workers’ board level representation in European company forms. The ETUC welcomes in this regard the declarations made by both the President-elect of the Commission and the President of the European Parliament, recognising that workers’ board level representation is missing from the European social model[4]. In order to contribute constructively to this necessary debate, the ETUC will continue expert work with a view to proposing concrete provisions.

The Directive should foster smooth articulation between the three dimensions of representation so as to strengthen workers’ influence in the consultation phase. For instance, an appropriate solution should be found to encourage workers’ board level representatives to regularly report back to the European Works Council and/ or any other level of workers’ representation.

Regardless of the scope, the EWC and SE Directives can serve as inspiration for the design of the new Directive with a view to ensuring that as much space as necessary is left to negotiations. Key principles should thus be laid down in binding minimum standards. The practical implementation of these principles should primarily be negotiated at the company level. Fall-back provisions, applying in the absence of an agreement or if the parties so wish, should be contained in subsidiary requirements. Since the instrument is a Directive, national transposition laws would always be able to provide for more protective rights.

Subsidiary requirements should include new provisions on workers’ board level representation, going beyond the “before and after principle” enshrined in the SE Directive.  Under this principle, there is almost no incentive for management to conduct meaningful negotiations on board level representation where such a scheme was not in place in the company before a conversion/ merger, nor is there any incentive to build something entirely new and distinctly European, tailored to the company and its stakeholders.

Prerogatives of trade unions are key and should be secured throughout the Directive and the exercise of workers’ involvement in all its forms. Taking the EWC Recast as an example, the Directive should in particular foresee that trade unions are to be informed of the beginning of negotiations and that access to trade union expertise is essential.