Workers via digital labour platforms often do not even earn the minimum wage, or are not covered by collective agreements, do not have any paid holidays, are exposed to health and safety hazards, do not have the right to paid sick leave or any social security protection. Working hours are often long, and, in some platforms, a significant gender pay gap and other types of discrimination are either tolerated or reinforced by algorithmic bias. These companies attract vulnerable groups that are obliged to accept low remuneration because otherwise someone else will take their job.

Digital labour platforms are only sustainable if they provide quality jobs and respect labour rights. Very few platforms operate only with genuine self-employed workers. Therefore, we need rules to ensure digital labour platforms cannot exploit loopholes in the law to make big profits through falsely self-employing their workers, in order to avoid sectorial obligations to proper pay, working conditions and social security. This practice is not only unfair to workers, but also to the vast majority of businesses who do follow the rules and to society as a whole.

Food delivery, taxi services and household work are just the tip of the iceberg: digital labour platforms are expanding to the commercial, engineering, care and nursing, construction, and service sectors. We also see so-called ‘platformisation’ in other sectors where practices such as breaking up jobs in tasks and extreme flexibilisation are gaining ground. This is yet another reason for the need for European legislation. The European Parliament, Member States, trade unions and organisations from all across Europe are saying clearly that there is no space nor need for the creation of a third status in between employee and self-employed, as it would leave the worker without proper protection nor autonomy.

The overwhelming majority of court rulings across Europe have shown crystal clear that platform companies are employers and that their workers should enjoy their rights as employees. The upcoming Directive must match this approach. The starting point of legal and policy measures must be that every digital labour platform is or can become an employer.

The European Commission should establish a presumption of an employment relationship which sets the status of employee as the point of departure. The burden of the proof should be shifted from the worker to the platform company. It is worth mentioning previous experiences in European countries where steps have been taken in this direction. This means workers of platform companies are in principle employees, unless platform companies can prove self-employment. This would change from the current situation of a presumption of self-employment in which platform workers are deliberately misclassified as self-employed and have to prove they are in a employment relationship.

A note of caution to avoid potential misunderstandings: A rebuttable presumption of employment relationship does not mean that all workers will be considered as employees. The business model of platform companies operating with genuine self-employed workers will not be affected, as long as they can prove there’s no dependency relationship.

Any watered-down solutions would bring very little to no change at all, as the most vulnerable party of the working relationship would have to kick-off the proceedings.

Algorithms are used by digital labour platforms as management tools with a significant impact on rights and working conditions. The algorithms that set the price of services and decide on the allocation of tasks function as black boxes to workers. The constant monitoring and the importance of ratings lead to extreme pressure and stress.

The central role of the algorithm is what sets platform work apart from other types of work. If the European Commission is serious about improving the situation of platform workers, regulating algorithmic management should be a key element of its proposal. Platform companies should be transparent about how their algorithm sets pricing and assigns work, including which factors it takes into account. Since it sets working conditions, workers and their trade unions should have a say on how it functions. And an algorithm can never be allowed to fire workers. Moreover, platform workers should have control over their own personal data and the data they generate while on the platform.

To tackle the lack of information on how digital labour platforms operate in the EU, they should be obliged to register with a public authority and make key data on their activities transparent.

Digital labour platforms operate transnationally and therefore a European solution is needed. This would also prevent a fragmented legislation across the continent, which would only boost a race to the bottom on rights. The signatories of this letter call on the European Commission to make sure that platform companies fall under the same rules as any other “offline” companies do in cross-border situations, be it labour, social or fiscal legislation.

To give the workers their fair share, and for sustainable business model to develop all across Europe through or without an app, we need to put high standards for platform companies. 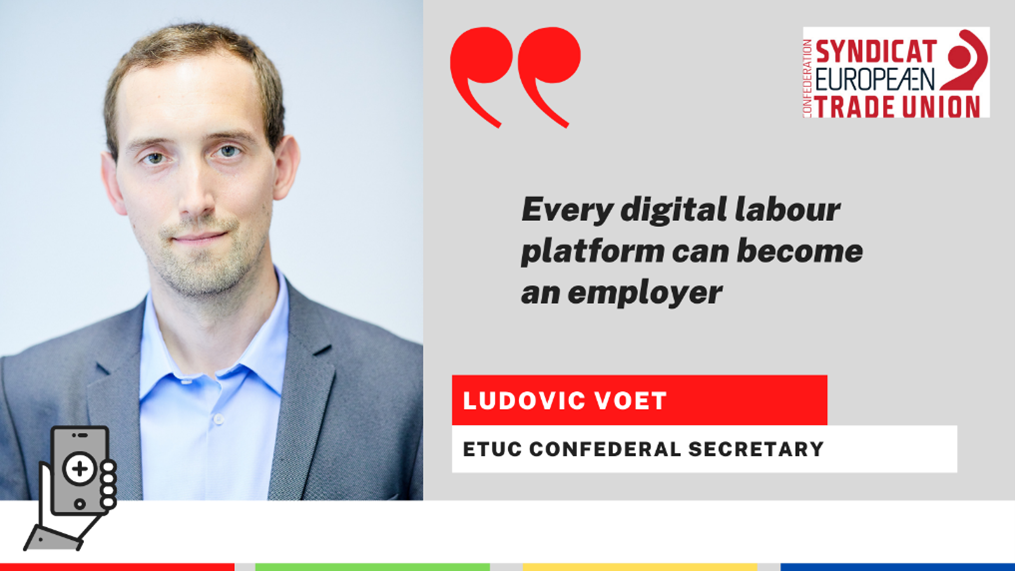