Manifesto for a Green, Just and Democratic European Economy 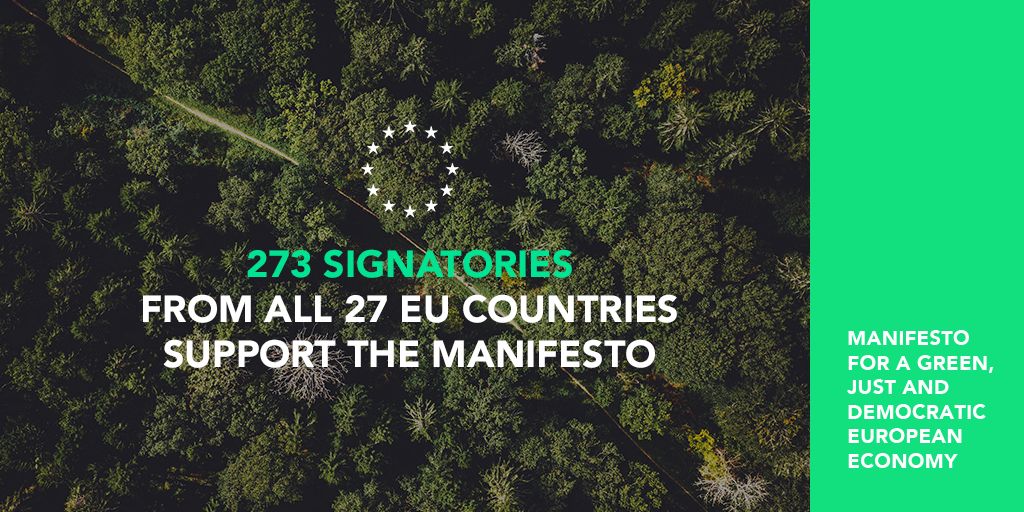 We are civil society organisations, think tanks, trade unions and employers supported by academics from across the European Union. We have come together to call for fundamental reform of the EU’s fiscal rules.

The aim of economic policy across Europe must not be to simply reduce debt. The economy needs to serve the reduction of socio-economic, intergenerational and gender inequalities, the realisation of social rights and the protection of climate and environment. The EU’s fiscal framework should fully support just transitions and a systemic transformation of our economies and societies to keep global warming below 1.5°C.

The Maastricht Treaty, signed in 1992, and legislative changes following the global financial crisis, created strict fiscal limits that cap member states’ public debt and deficits. While coordinating fiscal policies is necessary in a monetary union, these rules, with new challenges facing Europe, are no longer fit for purpose. First, they impose persistent constraints on public spending, depressing employment and investment. In many countries unemployment rates, especially youth unemployment rates, are still at unacceptable levels. Second, they fall short of ensuring we can adapt to and mitigate climate change through a just transition. The annual green investment gap was recently assessed by the European Commission at 520 billion euros. To fill the gap, substantial public funding will be needed. The imposition of arbitrary fiscal limits make this target unreachable. A return to the EU fiscal rules - suspended during the Covid-19 crisis - would translate into severe cuts in public spending in a majority of EU member states.

New austerity would jeopardise the recovery from the socio-economic impacts of the Covid-19 pandemic, and annihilate progress made thanks to the Recovery and Resilience Facility. It would deepen social inequalities and erode the citizens’ trust in the EU. And it would leave many people and governments without sufficient resources to engage in the green and just transition, affecting cohesion and convergence between member states.

Climate-related fiscal risks – i.e. the impact that underinvesting in climate change mitigation and adaptation will have on public budgets – need to be part of the country-specific debt sustainability analyses. Regulatory and administrative measures, taxation as well as additional funding also have a role to play to trigger and orient private investments.

Most importantly, governments have the responsibility to steer the way to operate a socially just green transition. The European Union cannot afford to take any other path.