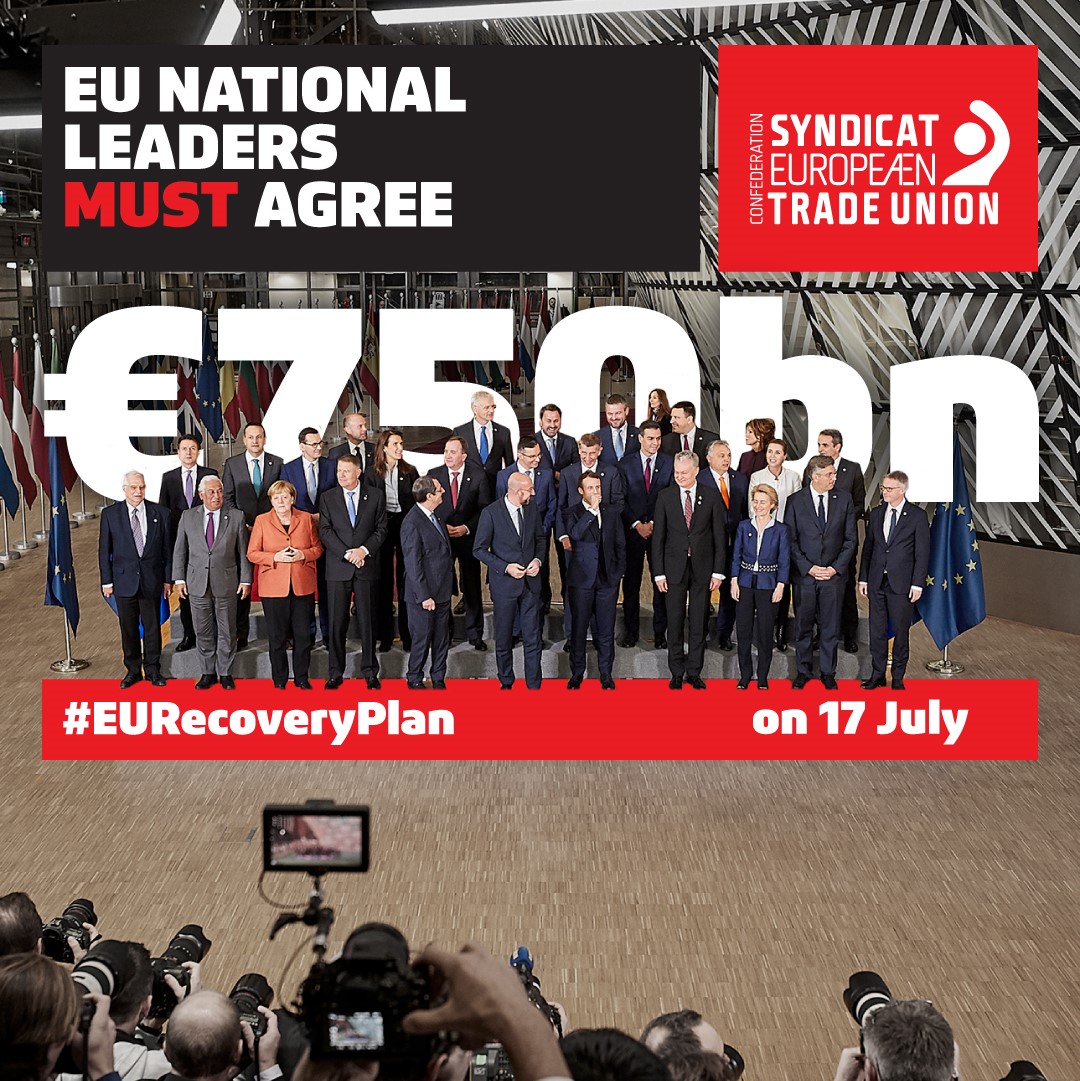 Forecasts for recession, and for unemployment, keep getting worse. The European Commission’s summer economic forecast predicts a more severe recession in 2020 than its spring forecast and a lower level of recovery in 2021. ‘Urgent action needed to stop jobs crisis becoming a social crisis’ is the OECD’s headline for their Employment Outlook of July 2020.

In the first three months of the Covid-19 restrictions unemployment increased by 900,000 across the EU to a shocking total of 14.3 million. The ETUC estimates that a further 45 million workers are currently in short-term work schemes and at serious risk of unemployment, along with the 2.5 million workers on very short-term contracts. Together these are over 60 million reasons to launch an EU Recovery Plan NOW.

These alarming economic figures will bring severe social and political consequences, which will come on top of an already unacceptable situation: inequality is far too high; the average pay of workers in a third of EU countries is lower than, or nearly the same as, ten years ago; and Covid-19 has exposed the effects of cuts and under investment in health,  social care and other services. Slow and very ‘uneven’ recovery from the crisis of more than a decade ago now threatens to be overwhelmed by a tsunami of recession caused by the pandemic.

That is why the trade union movement across Europe calls on the European Institutions and on each and every Head of Government or State in the European Union – to take collective responsibility to support the proposed €750 billion EU Recovery Plan at the European Council meeting on July 17-18.

Additionally, we ask all institutions NOT to increase the share of loans in the package, in order not to make the debt burden of many member states unsustainable; NOT to reduce the amount of the MFF proposed by the EU Commission, in order to avoid a serious risk of cuts to cohesion policy, particularly the ESF+; NOT to introduce veto rights and budgetary conditionalities on National Recovery Plans, which would harm the potential of the proposed recovery strategy to prevent a massive economic and employment crisis in the EU. We ask the institutions to agree that the Green Deal, the Digital Agenda, the European Pillar of Social Rights and the UN SDGs should guide the recovery.

The Recovery Plan is probably the most important decision to be taken by the European Union for more than a decade and cannot be postponed again. Delaying it risks pushing millions into unemployment at a financial cost to governments far higher than funding the recovery.

Do not forget who worked, and put their lives at risk, through the Covid-19 crisis to provide essential services – who were suspended from work or pushed into unemployment. It will be working people, often the lowest paid workers, their families and communities that will suffer the most if you fail to achieve agreement on a large and ambitious EU Recovery Plan.

Agreeing on this must be the highest social, economic and political priority of the European Union and its leaders.