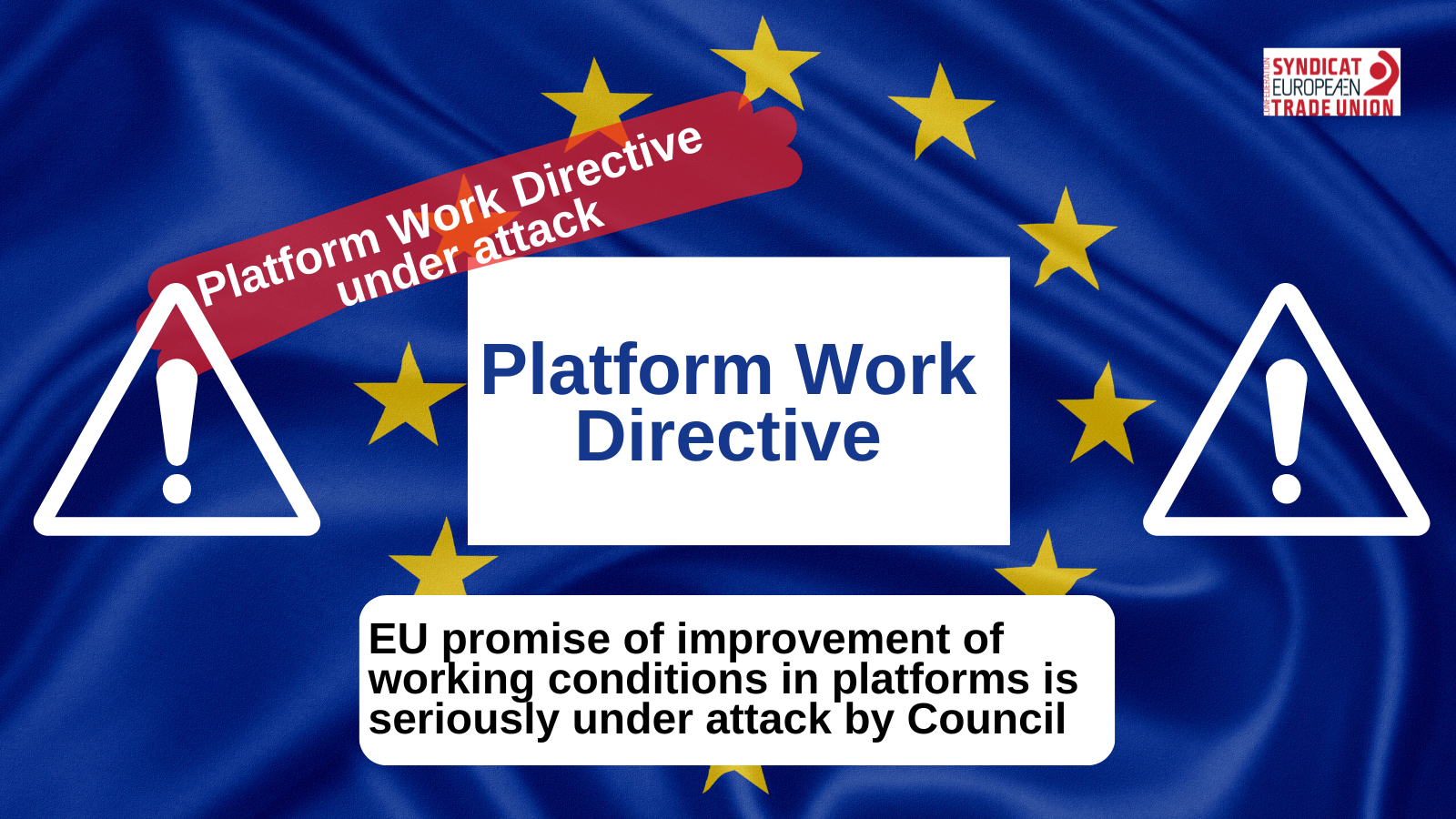 In December 2021, the European Commission presented a proposal of Directive on improving working conditions in platform work, which included a presumption of employment relationship for workers in digital labour platforms.

While that was a successful beginning of this ordinary legislative procedure, we are afraid that the recent developments can be considered going in the opposite way: one that will not bring a positive change for workers; one that puts all risk on their shoulders; one that will allow for unfair competition between those digital labour platforms who respect the rules and those who demonstrably ignore them.

In the proposal, the Commission has made the activation of the presumption of employment dependent on two out of five criteria of subordination to be met. The activation procedure should be either initiated by the person doing platform work or by an authority. And finally, the positive result of a decision on the presumption of employment relationship is limited to the individual claimants, and not all the workers within the digital labour platforms performing similar functions.

This procedure would not bring any advancement or difference to the current situation. The possibility for individuals and enforcement authorities to bring cases to court already exists. In these situations, the contested employment relationship is assessed on the grounds of national definitions of workers, and not on made-up European criteria that infringes national definitions of workers.

The expectation by the European Commission that individual workers will start a proceeding against their digital labour platform to challenge their self-employment status ignores the vulnerability of these workers to undertake any legal action because of their lack of protection and the structural bargaining inequality between workers and employers. The alternative that puts the responsibility on labour inspectorates, is not taking into account their already limited resources across EU.

Likewise, the limitation of the presumption of employment relationship to only those workers bringing their cases to the relevant administrative or judicial body would result in situations in which two or more workers doing the same work for the same digital labour platform would enjoy different employment statutes. This is an attempt against the anti-discrimination acquis in which the European labour legislation is built. Erga Omnes is the only rightful and well-functioning approach.

The current proposal of the European Commission should therefore be improved. In this regard, ETUC is concerned by the proposal of Council mandate presented by the Czech Presidency of the EU which makes the presumption of employment relationship and the eventual reclassification of workers as employees more complicated, adds a new layer of complexity to the application of the legislation and therefore makes the Directive weaker. The Czech Presidency also introduces a derogation for the application of the presumption of employment relationship to authorities responsible for, inter alia, social security and tax or criminal proceedings, which will limit the enforcement of the law. A new cumulative condition has been added to the definition of digital labour platform, narrowing its scope, and therefore providing these companies the possibility to circumvent the law. Finally, it also enables Member States not to apply the presumption "if it is manifest that the presumption would be successfully rebutted".

The impact assessment issued by the Commission estimates that proposed measures would only benefit 5.51 million currently misclassified platform workers out of the total 28.3 million at EU level. ETUC has founded reservations on the methodology used by this study, and it is highly probable that the number of bogus self-employed workers in digital labour platforms exceeds extensively the estimate of 5.51 million. Also, when the Commission estimates that the number of platform workers will grow to 42.7 million in the EU-27 by 2030, we urgently need an ambitious and future-proof Directive to protect this rising group.

Therefore, we hereby ask you in your capacity of a member of the European Council to respond to the weakening proposal of the Czech Presidency of the European Union. Furthermore, we encourage you to defend a broad definition of digital labour platforms and a general presumption (with no criteria) by which the employment relationship should be the point of departure and by which those digital labour platforms which want to continue operating with self-employed workers should receive the validation of the relevant administrative or judicial body.

We wanted to hereby invite you to discuss the demands of the European trade union movement in light of the ongoing legislative procedure of the Directive on improving working conditions in platform work at any moment of your availability in the coming days.

20220923_ETUC letter calling for an ambitious directive on platform work.pdf
Published on 23.09.2022
In Platform Economy
Print