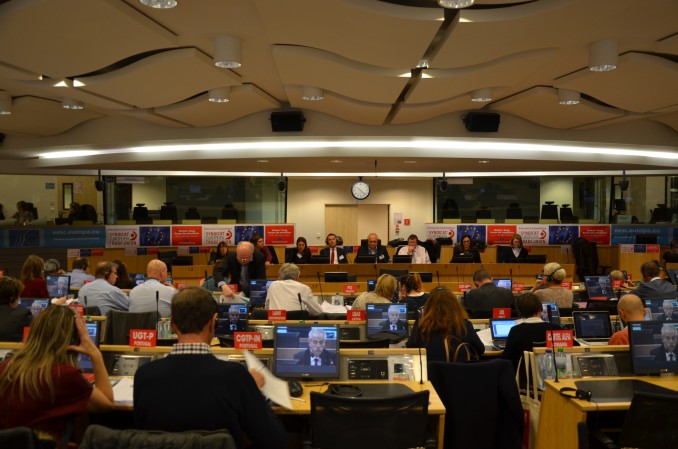 In late January the Council of General Affairs adopted the EU guidelines to negotiate a transition period as part of the Withdrawal Agreement. The guidelines require the UK to remain in the single market and customs union, paying into the budget and being covered by the full EU acquis during the transition – including changes to EU law and the jurisdiction of the CJEU during that period, which is set to end in December 2020. This is consistent with the European Council’s commitment to prevent social, environmental and tax dumping once the UK leaves the EU.

The ETUC welcomes these additional guidelines, it is essential that the UK stays in the single market and customs union until a new relationship is agreed. This is in the interests of working people in the EU and the UK. Following existing and new EU law it is the only way to   guarantee a level playing field especially on workers’ rights.

The ETUC welcomes the publication of the EU Council draft guidelines on the future relationship that will be discussed at the next EU Council meeting on 22/23 March 2018. We agree with the draft guidelines on the following point: “Given the UK's geographic proximity and economic interdependence with the EU27, the future relationship will only deliver in a mutually satisfactory way if it includes robust guarantees which ensure a level playing field. The aim should be to prevent unfair competitive advantage that the UK could enjoy through undercutting of current levels of protection with respect to competition and state aid, tax, social, environment and regulatory measures and practices. This will require a combination of substantive rules aligned with EU and international standards, adequate mechanisms to ensure effective implementation domestically, enforcement and dispute settlement mechanisms in the agreement as well as Union autonomous remedies, that are all commensurate with the depth and breadth of the EU-UK economic connectedness.”

The ETUC calls the guidelines also to require UK legislation to continue to keep pace with the evolution of the EU social acquis by including a non-regression clause. This would be important to avoid social dumping between the UK and the EU in its future relationship and to ensure British workers do not become second-class citizens.

The ETUC is deeply concerned that if labour rights are not properly upheld after Brexit, it will not only damage workers in the UK but will have possible devastating effects on workers’ rights in EU27/EEA30.

If in the future EU-UK partnership this issue is not seriously addressed, it could possibly trigger a race to the bottom and social dumping and thus, damage workers’ rights across Europe.

Should the UK get duty free access for goods and services to the EU27/EEA30 market after Brexit without any social conditionalities, Britain could pursue a competitive strategy based on lower employment standards, well beyond EU minimum requirements. A deregulatory drive could potentially reduce the costs of operating businesses in the UK to the detriment of companies in the rest of the EU.

It is therefore possible that those EU27/EEA30 countries which enforce standards above the EU minimum requirements, could be put at disadvantage. Employment regulations may be changed following pressures from the countries that would see certain sectors of their labour markets threatened by a potential UK undercutting economic strategy. Therefore, EU27/EEA30 countries whose employment standards – on various dimensions – are currently higher than the EU/EEA30 minimum threshold would have an incentive to decrease them. In the absence of assurances that the UK will retain current employment standards, EU countries could succumb to a competition with the UK at the low end of the labour market as well as at the higher end. Therefore, it is important to prevent the UK from encouraging trade or investment by weakening or reducing the levels of protection afforded in their labour law and standards after Brexit. The future EU-UK partnership should ensure that the UK shall not waive or otherwise or otherwise derogate from, its labour law and standards, to encourage trade or attract foreign investment.

Laying the foundations for a level playing field

In December 2017 the ETUC set out its tests be applied to any proposed future relationship between the EU and the UK after the transitional arrangement. The ETUC called for a level playing field on workers’ rights be maintained and for frictionless, tariff-free and barrier-free trade in goods and services, as well as allowing movement of workers while protecting them from exploitation, unfair treatment and undercutting and guaranteeing their right to remain. The ETUC also called for a dispute settlement mechanism based on the jurisdiction of the CJEU and for the protection of the Good Friday Agreement on the island of Ireland. In this regard we welcome the draft motion for a resolution on the framework of the future EU-UK relationship of the European Parliament, which says that with the view to preserving the 1998 Good Friday Agreement in all its parts and the rights of people in Northern Ireland, the UK must keep to its commitments to ensure that there is no hardening of the border on the island of Ireland, either by means of detailed proposals to be put forward in negotiations on the framework of the future EU-UK relationship, by specific solutions for Northern Ireland or, by continued regulatory alignment with the EU acquis. The ETUC also called to grant family reunification rights, establishing clear procedural guarantees. Family reunification helps to create socio-cultural stability and to promote economic and social cohesion – a fundamental EU objective. Workers also need guarantees that their pension entitlements they have built up will not be endangered because of Brexit.

Based on those tests the ETUC remains of the view that the best option for working people would be for the UK to accede to EFTA and the European Economic Area (EEA) Agreement and continuing being part of the EU customs union in the future. However, given the red lines set out by the UK government, while that is effectively what the transition period would look like, the EEA option may not be possible in the longer term.

The ETUC will continue to call for all options to remain on the table and calls to set out clear terms for a level playing field in the future partnership.

Why the “Free trade agreement approach” will not work

The ETUC is particularly concerned about the current British position to seek a free trade agreement (FTA) with the EU, instead of full membership of the single market. The ETUC has grave concerns on existing EU FTAs with other trading partners that do not allow for a level playing field, particularly on social issues. An FTA between the EU and the UK would not live up to the expectations of workers both in the UK and in the EU27 for the following reasons:

While FTAs negotiated by the EU tend to include a trade and sustainable development chapter, its labour clauses usually only require respect of ILO conventions. As stated before, the ETUC does not believe these standards to be enough to prevent the UK from undermining the rights of working people in Britain to obtain an unfair competitive advantage by deregulating (see Annex I for a list of areas where this risk is particularly high). To protect the level playing field and prevent social dumping, the future EU-UK partnership must instead cover the whole of the EU acquis:  it must demand that the UK protects existing rights via a non-regression clause and keeps pace with new ones via automatic transposition as required in EEA. Only this would protect the rights at work of people in Britain, prevent undermining the rights at work of people across Europe, and, crucially for the safeguarding of the Good Friday Agreement, guarantee regulatory alignment between rights at work in Ireland and Northern Ireland. Failing that, it must contain an undertaking that the UK will approximate its laws to those of the EU as required by the DCFTA with Ukraine, with the difference that this commitment should be binding and subject to enforcement. Moreover, trade and sustainable development chapters are not binding: breaches of this chapter do not lead to sanctions. As a minimum, the future EU-UK partnership must include a mechanism to suspend the agreement e.g. reduce market access, if labour commitments are breached. It must also foresee compensation and remedial action.

An EU FTA would mostly liberalise trade in goods. Given the existing level of intra-EU trade in services it is likely that an FTA only covering goods and with limited coverage of services would be detrimental to both the EU and the UK.

Furthermore, a “negative list” approach to liberalise trade in services between the UK and the EU, even coupled with a ‘right to regulate’ clause, as it is the case in all current EU FTAs, would not adequately protect the contracting parties’ public services from the risk of liberalisation - there would still be a ‘chilling effect’ on national governments given the risk of private operators already running public services on one side seeking market access in the other.

The ETUC also demands that the future partnership must have the least negative impact on European industry to keep industrial jobs in Europe. This means tariff and barrier free trade, mutual access, full compatibility of safety and environmental regulations and the protection of current workers’ rights. This is particularly important for the industrial and manufacturing sectors, which have large and complex supply chains heavily integrated throughout Europe.

Existing trade agreements typically include state to state dispute settlement mechanism, but increasingly also investor-state arbitration (ISDS, ICS and more recently a Multilateral Investment Court – MIC - is being explored). None of these systems would safeguard the right of individual workers and their unions to seek redress including by being able to rely directly on their rights protected in treaties in domestic courts. Arbitration implies an emphasis on reaching an agreement, which could be political, rather than judicial determination that compensates the worker. Also, the appointment of the arbitration panel becomes a political decision (something MIC seeks to remedy). The ETUC calls for any future dispute settlement mechanism between the UK and the EU in their future partnership to:

These aspects are particularly important to protect the rights of EU and UK nationals: the commitments undertaken by the UK and the EU in their joint position agreed last December would be meaningless without effective means to enforce them judicially after CJEU jurisdiction in the UK has ceased in the future.

On 23 March 2018 the European Council will adopt another set of additional guidelines for a political declaration on the future partnership, which will be appended to the Withdrawal Agreement. While it is not clear what the UK wishes for the future, the EU is preparing to set out the broad outlines of the future partnership and laying down its conditions.

Between April and October, the legal text of the Withdrawal Agreement (including the terms of the transition and a and political declaration on the future) will be negotiated. The aim is for the EU summit of 18-19 October to adopt the negotiated text and put it to the EU Parliament and national legislatures for ratification by March 2019. It is only after the UK has left the EU, and the transition period has started, that negotiations on the terms of the future partnership will be negotiated.

We reiterate our view – set out in the resolution of the ETUC Executive Committee in March 2017 – that, should the UK seek to suspend or revoke its declaration under Article 50 of the Treaty, that should be welcomed by the EU.

We draw the attention to Michel Barnier of our previous resolutions, all of which remain relevant.