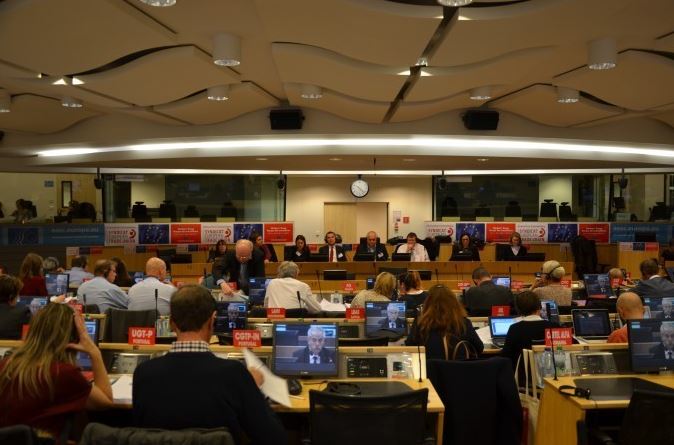 Gender-based violence continues to be a phenomenon that defies all boundaries. 62 million women in the EU alone have experienced this abuse of power through some form of physical assault since the age of 15. It also includes numerous forms of psychological violence. It happens everywhere, be it at home, at work, in public, in every society and every EU country, regardless of social background of both victims and perpetrators.  The Convention on the Elimination of Discrimination against Women (CEDAW) defines gender-based violence as “violence that is directed against a woman because she is a woman or that affects women disproportionately.[1]”

It constitutes a brutal form of discrimination and a violation of fundamental human rights. It is both a cause and a consequence of discrimination and the entrenched inequalities between women and men.  As such, gender-based violence is a core trade union and workplace issue affecting workers’ health, safety and dignity.

Although violence at work is not a new issue, trade unions today recognise that the growing casualisation of work, new forms of work organisation and related work pressures have contributed to increased levels of harassment at work and the rendered invisibility of the problem. Although women are at risk of different forms of violence and harassment at all ages, the changing nature of their relationships (with family members, peers, authorities, etc.) and the different environments (at home, in school, at work, within the community, etc) in which they spend time expose them to specific forms of abusive behaviours during each phase of their life. Thus, women workers and especially young women workers are particularly affected as they often work in low paid and casualised sectors of the economy; many suffer in silence as they fear retaliation or loss of their jobs. A key issue is to develop workplace solutions that workers trust and that tackle the underlying causes of violence at work.

Similarly, domestic violence is a workplace issue – it can impact on a woman’s participation in work, her work performance and her safety at work. Violence at work, including the effect of domestic violence at work, affects workers’ wellbeing, health, safety and job performance. Negotiating workplace supports, such as flexible work, paid leave or changes in work location, can ensure that women can safely retain their jobs and have the financial independence and support at work that can help them to leave violent partners and live independently without fear of further violence.

The ETUC and its affiliates have been at the forefront of combating gender-based violence. In 2007, the ETUC and the European employers (BUSINESSEUROPE, UEAPME and CEEP) successfully negotiated a European Social Partners’ Framework Agreement to tackle violence and harassment at work. Some confederations have signed framework agreements at the national and sectoral level to implement the agreement, as is the case of Italy and France, others have inserted new clauses in existing agreements at sectoral or company level, as well as developing jointly agreed guidance, statements or declarations.

In 2011, the ETUC adopted its Strategy and Action Plan that stated that “economic dependence and sexist stereotypes contribute to inequality and violence”, and called for a new European legal instrument to combat violence against women. The following year, the ETUC adopted its gender equality work programme, which sought to encourage trade unions to address the link between domestic violence and the workplace.   In 2014, ETUC 8th of March Survey on gender-based violence for the first time collected information on how ETUC affiliates have addressed the issue of violence against women, identifying trends and shared concerns. The survey showed that some unions have been active in developing strategies and actions, including guidelines and collective bargaining agreements.

Under its current Action Programme on Gender Equality (2016-2019), the ETUC chose to make combating sexual harassment and violence at work one of its top priorities.   In the context of this program, the ETUC conducted a ground-breaking study “Safe at home – Safe at Work”, which set out to raise awareness amongst a wider audience about the need for the systematic inclusion of gender when dealing with violence and harassment at work, and to make recommendations for national and European-level policy developments, as well as for trade union and/or social partner action and future policy developments. The study has been prepared at a time of increased violence and harassment at work, continued and widening gender inequalities at work, and a culture of sexism in the workplace.

The study concluded that:

In recent months, there has been renewed attention to the issue of gender-based violence at European and international levels, first with the EU signing the Istanbul Convention against violence against women, alongside the EU year of focussed actions against violence against women. Both are needed and welcome measures.  Furthermore, the global actions of  #metoo,  #balancetonporc,  #NiUnaMenos and #16Pledges to combat gender-based violence and harassment against women, is giving much needed visibility to the issue. All these actions have been strongly supported or even initiated by unions.

The Istanbul Convention, and the potential for a strong EU legal framework on gender-based violence in the form of a new directive to ensure the full implementation of the Convention, are viewed as being of crucial importance in developing a coordinated, integrated approach to tackling violence against women, and seeing how this can be further elaborated in the workplace.

The ETUC would strongly support a new ILO Convention on violence against women and men in the world of work, to be discussed at the International Labour Conference in 2018. Such a Convention has the potential for a broad approach that would include both domestic violence at work and the need for a strong focus on gender-based violence.

The ETUC is convinced that social partners play a crucial role in preventing and tackling the consequences of violence and harassment in the workplace, in particular gender-based violence. To this end social dialogue at all levels should be reinforced and/or restored in countries where it was either dismantled or weakened by austerity measures.

Collective bargaining, although under attack, remains the most important tool used by trade unions for preventing and combating violence and sexual harassment, including gender-based violence at work, third-party harassment, and the effects of domestic violence at work. Unions also note that collective bargaining can be considerably strengthened when legislation sets out clear obligations on governments, employers and unions.

The ETUC’s Commitments and Actions against gender-based violence

The ETUC believes that trade unions should be pioneers in introducing new initiatives (and reinforcing existing ones) to combat gender-based violence at work, including domestic violence at work, by drawing up policies, procedures and measures of support that workers trust.

An ILO Convention and an EU legal framework on the issue of gender-based violence, with a strong focus on the workplace, will ensure that governments commit to a strong legal framework at the national and European levels, giving visibility to and a role for collective bargaining in preventing and tackling gender-based violence at work. The ETUC will actively support the ITUC and civil society organisations to make progress at both international and EU level in this respect.

Legal rights should also be introduced for victims of domestic violence in the workplace, including the right to paid leave and support, together with other workplace measures and obligations on employers to prevent and tackle this form of violence. The introduction of these rights should also mean placing a duty on employers to introduce sectoral and workplace measures in consultation with unions, which include setting out prevention measures, effective procedures for dealing with complaints, addressing sanctions for perpetrators, including ban him from the victims’ workplace; providing information to ensure that workers understand policies and procedures, and supporting victims of violence and harassment at work.  The ETUC stresses the need for an all-out support system for women workers who are victims of gender-based violence.

There is a need to rethink union approaches to addressing gender inequalities by looking more closely at discrimination and the unequal gender roles and relations at both individual and institutional levels. This requires a commitment to changing mind sets and to addressing issues such as unconscious bias and institutional forms of gender discrimination, as well as structural inequalities in society and the workplace, including within union structures and procedures.

A culture of discrimination and inequality at work cannot be separated from patriarchy and unequal gender relations in society, in the community and in the family. Gender equality is the responsibility of all individuals in society and requires the active contribution of both men and women. Unions should commit to the development of education and awareness raising campaigns. More women in decision-making positions would contribute to a work environment free from harassment and violence. Male trade union leaders, negotiators and men are especially encouraged to promote a zero-tolerance approach to violence and harassment against women, including in trade unions’ ranks.

Systematic, ongoing campaigns of awareness raising, so that male workers and trade unionists, and employers, understand the gendered nature of violence against women should be promoted by trade unions. This is particularly important in ensuring that sexual harassment and domestic violence at work are included in agreements on violence and harassment at work, in company-level bargaining and workplace policies.

The exchange of existing best practices of combating violence and sexual harassment against women in the workplace should be further promoted.

The ETUC will continue to pursue its work against violence against women building on the experience of its affiliates as well as research conducted, in particular on “Safe at Home – Safe at Work” and its recommendations.

The ETUC will continue to promote awareness-raising material on Commitment on 25 November, the international Day to Eliminate Violence against women.

Some key data on violence against women at work

According to the EU-wide FRA study of 2014 entitled ‘Violence against women’ one in three women have experienced physical or sexual violence during their adult lives; 55% of women have been sexually harassed in the EU; 32% of all victims in the EU said the perpetrator was a superior, colleague or customer; 75% of women in professions requiring qualifications or top management jobs have been sexually harassed; 61% of women employed in the service sector have been subjected to sexual harassment; 20% of young women (between the ages of 18 and 29) in the EU28 have experienced cyber harassment; one in ten women have been subjected to sexual harassment or stalking using new technology.

A survey in Ireland found that there had been a 14% increase in the number of cases of bullying of nurses and midwives reported over the previous four years, and 6% of respondents said they were bullied daily.

In Germany, 52.2% of the women interviewed had experienced sexual violence and harassment either in a public space, at work or in the private sphere.

A report by the European Transport Workers’ Federation (ETF) on workplace violence against women transport workers, reveals that women working in the sector are subject to high levels of abuse, threats, intimidation and offensive behaviour. Responses from more than 1,400 women transport workers from across Europe show that: 63% of the respondents have experienced at least one recent act of violence; 25% of the survey participants believe that violence against women is a regular occurrence in the transport sector; 26% believe that harassment is considered to be ‘part of the job’ in transport.

In relation to third-party violence, estimates range from 2% to 23% of all workers; this rises to 42% of those who work in direct contact with the public, many of who are women. A union survey in Bulgaria found that over half of women transport workers experienced violence from passengers. Health workers are another group reporting high rates of third-party violence in Bulgaria and in the education sector in Denmark there was a 50% increase in physical violence against teachers by pupils. In the hotel and catering sector, a survey by 3F found that 24% of workers had experienced sexual harassment at work, mainly from clients. The Netherlands Working Conditions Survey 2011 found that 24% of workers were exposed at least once to some form of third-party violence from people such as customers, clients, students and passengers.